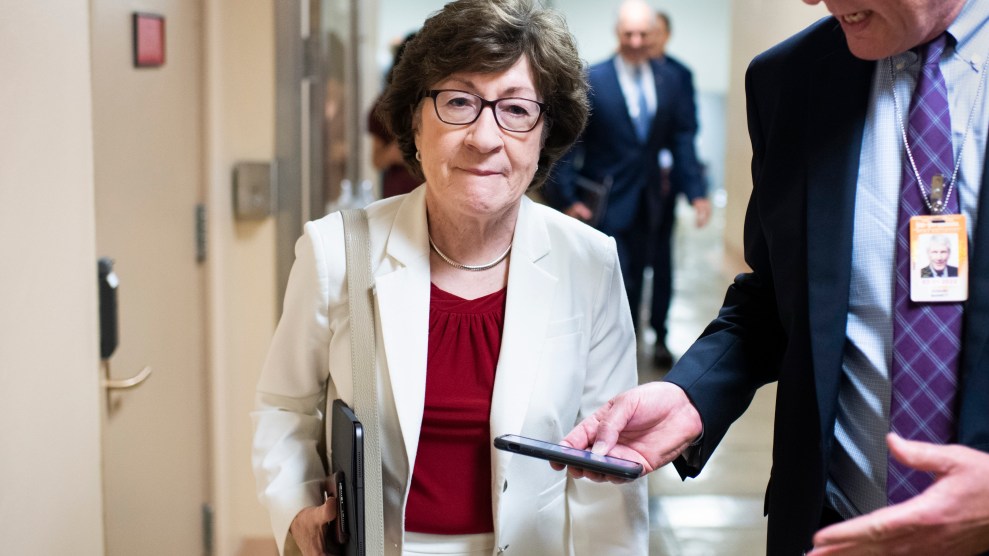 Susan Collins, the Republican senator from Maine who purports to support abortion, is surprised that the hard-right conservatives she voted onto the Supreme Court are willing to overturn Roe v. Wade.

“If this leaked draft opinion is the final decision and this reporting is accurate, it would be completely inconsistent with what Justice Gorsuch and Justice Kavanaugh said in their hearings and in our meetings in my office,” she said in a statement.

Let me put it another way: It sounds like Gorsuch and Kavanaugh lied to Collins to win her vote, and Collins was gullible enough to believe them.

The nominees used vague language concerning Roe during their confirmation hearings. Gorsuch called it “settled law”—“in the sense that it is a decision of the U.S. Supreme Court.” (Tell me something I didn’t already know.) Kavanaugh was even vaguer, calling it “settled as precedent.” Collins implied today that both justices made clear to her in meetings that they would not end Roe. Well, wrong. Now, the justices’ willingness to overturn settled law is all but confirmed.

For years, Collins, like many of us following the news at home, seems to have been clinging to the hope that maybe the Supreme Court would respect precedent, despite the conservative legal movement’s long and obvious battle to someday overturn Roe. “So I think that a lot of people on the left and pundits have been wrong about how the court has respected precedent,” she said last year on CNN. “I think they will look at precedent and reach their decision.”

Precedent looks to have flown out the window when Samuel Alito wrote in his leaked draft opinion, “We hold that Roe and Casey must be overruled…Roe was egregiously wrong from the start.”

Forgive us for holding out faith in our judicial overlords—after all, we didn’t vote to confirm them, and those of us who don’t happen to live in a handful of swing states are next to powerless in deciding the makeup of the Supreme Court. But no one who has been paying attention to conservative attacks on reproductive rights over the last, say, five years, is at all surprised about this outcome. Collins has been representing Maine in the Senate since 1997. This was always conservatives’ endgame. Collins was always too willfully ignorant to see it.

At least Collins did more than Sen. Lisa Murkowski of Alaska, the other stalwart Republican senator who claims to stick up for abortion rights. All she could muster up was anger about The Leak.

Murkowski tells us that she finds the leak “reprehensible,” and stresses that while Roe remains the law of the land, “it rocks my confidence in the court right now” if leaked decision ends up being final. Declined comment when I asked her if Kavanaugh lied to her.