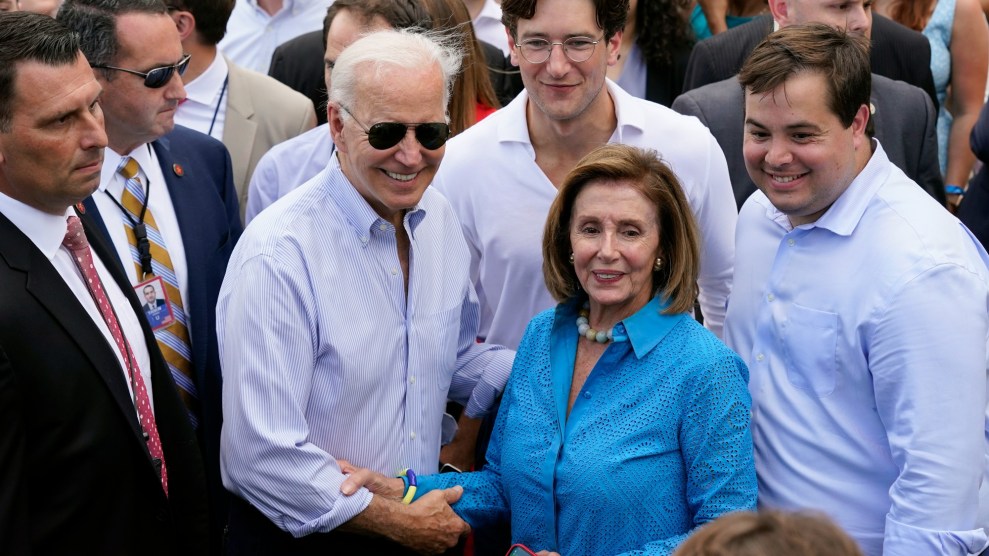 Nancy Pelosi wants to visit Taiwan, which, if you know almost anything about the current state of US-China relations, is about the last thing Joe Biden’s administration wants.

Any US move regarding Taiwan is fraught with tension, due in part to the island’s unique diplomatic status. China has long considered Taiwan a breakaway territory—a position the United States purposefully does not accept or dispute. Though the United States continues to sell Taiwan weapons and send informal delegations to its leaders, few high-ranking US officials have visited the island since 1979, when Jimmy Carter officially recognized China’s Communist government for the first time.

Asked about Pelosi’s plan for a visit, Biden flatly said last week, “The military thinks it’s not a good idea right now.” Behind closed doors, his administration has “been working to spell out the potential risks of a visit in meetings with Pelosi and her team,” CNN reported.

Pelosi, who has long been critical of China’s repressive government, would be the first House speaker to visit Taiwan since Newt Gingrich, who himself urged Pelosi to go in a Fox News appearance this week. “She cannot allow the Chinese communist dictatorship to think that it can bully an American Speaker of the House,” he said. “And frankly, she ought to tell the Pentagon and the State Department to shut up.”

The Biden administration certainly is not a fan of any move that may provoke China this summer, as Chinese leader Xi Jinping prepares for a momentous Party gathering in the fall that will likely cement him as leader for life. Facing domestic backlash over China’s controversial “zero Covid” strategy, “appealing to raw patriotism, particularly over Taiwan” might help Xi shore up support, the Associated Press explained.

Party mouthpieces have already suggested as much. Zhao Lijian, a Foreign Ministry spokesperson (and the subject of this great New York Times Magazine profile), said if Pelosi goes through with the visit, “China will take firm and resolute measures to safeguard national sovereignty and territorial integrity, and the US will be responsible for all of the serious consequences.”

What does that mean? Most likely, some display of force. Hu Xijin, another influential Party propagandist, took to Twitter to suggest that Chinese aircraft “accompany Pelosi’s plane” into Taiwanese airspace.

The Chinese mainland has various plans to counteract Pelosi’s visit to Taiwan, and I believe what I have said is one of them. It is certain that the mainland’s response to Pelosi’s visit will be unprecedented and will involve shocking military response. https://t.co/V1t2hETaMd

No matter the chatter from Beijing’s newly assertive diplomats, Pelosi’s visit would be pockmarked with trouble. If she goes through with it, Biden, who is set to speak to Xi this week, will have to navigate another diplomatic fracas at a time when Xi is emboldened to act aggressively toward the United States for domestic reasons. If she cancels the trip, China succeeds at its effort to isolate Taiwan and can keep stigmatizing outreach from other countries looking to do business there.

There is no easy option here and, as US-China relations grow worse, bad options will often be the only ones available. Lev Nachman, a fellow at Harvard’s Fairbank Center for Chinese Studies, laid out the calculus well:

Multiple things can be true about Pelosi visiting Taiwan:

1. The US should be able to send officials to Taiwan to show support, and the PRC should not set the US's terms for visits.

2. At this moment, it is possible that her trip adds more risk than it detracts.

The only inevitable aspect of this entire standoff is that Taiwan looks to be increasingly under threat of invasion. The New York Times reported Monday that Biden officials expect China “to move against” the island in the “next year and a half.” If that is the case, it may help if the top Democrat in the House and the Democrat in the White House got on the same page.