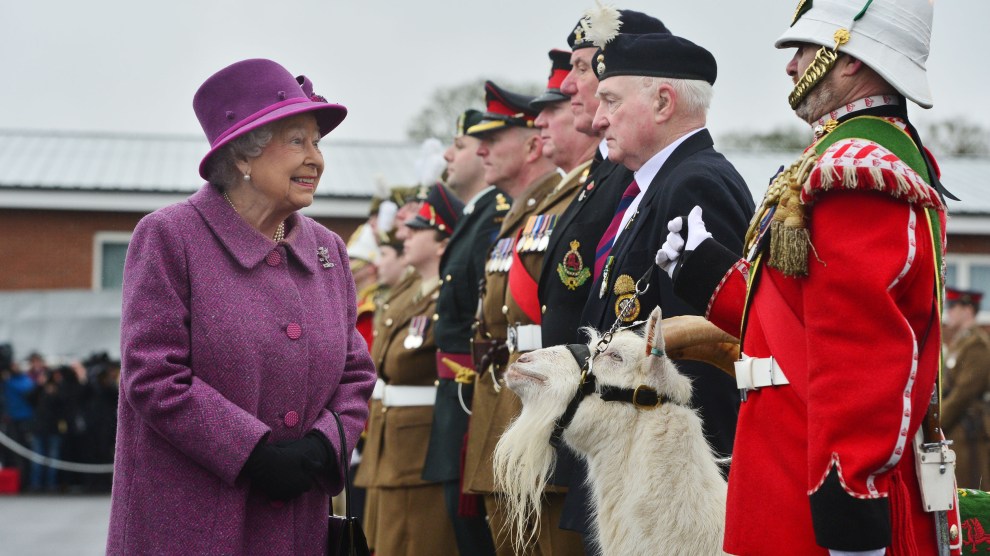 You've heard a lot about the Queen's corgis. But we need to talk about the goats.Ben Birchall/PA Wire/AP

Apologies, Brits: The only royal bloodline I care about is that of the Kashmir goats that have been roaming the Scottish seaside since the 1800s.

After the death of Queen Elizabeth II, the world has debated the need for keeping the monarchy around. I am anti-monarchy. But I have a confession to make. I am smitten with Shenkin the royal goat.

This morning, I saw a photo of Shenkin leading the 3rd battalion of the Royal Welsh in a procession for the King’s proclamation at Cardiff Castle. Shenkin, it turns out, is the battalion’s official mascot—and carries the rank of lance corporal. He is also very beautiful, and very fashionable.

The Proclamation Guard of 26 men of the 3rd Battalion the Royal Welsh are now making their way from the City Hall to Cardiff Castle where the Proclamation of HM King Charles III will take place. pic.twitter.com/DQKPLu4xVk

The royal goat tradition dates back to the Revolutionary War and the Battle of Bunker Hill (1775), when a wild goat purportedly led a group of Welsh soldiers from the battlefield. Yes, this irks the Bostonian in me. But we wound up securing our independence, the goat’s intervention notwithstanding. I can forgive the goat his indiscretion.

Now, the military goats are selected from a herd that lives in Llandudno, Wales, descended from a flock which was said to be a gift from the Shah of Persia to Queen Victoria. Goat selection is apparently an intensive process, requiring the devotion of a full-time Goat Major who trains the kid.

And Shenkin is quite the trainee, according to the Royal Welsh Museum:

The most recent recruit is Fusilier Shenkin IV of the 3rd Battalion who is a Kashmir goat and was selected from the royal herd on the Great Orme Country Park in 2018. The army, along with an RSPCA vet, set out to find the next Shenkin, but it was no easy task as it took four weeks and many attempts to catch this cheeky kid! Shenkin IV was taken to Maindy Barracks in Cardiff for six months of training which included day trips to Cardiff city centre to get him used to crowds and noise. He made his first official public debut at the National Armed Forces Day in Llandudno on June 30th 2018.

Shenkin the goat! Can we all have a goat as our mascot? pic.twitter.com/03pg1t4gCD

Shenkin is not the only royal goat. Different battalions have their own mascots. A notable one is the 1st battalion’s William Windsor, who made a name for himself when he got cheeky and tried to headbutt a drummer at Queen Elizabeth’s 80th birthday parade. (He was briefly demoted for “lack of decorum,” but he was promoted again a few months later.)

After he retired in 2009, William Windsor was replaced with a five-month-old kid. A Wikipedia page that doesn’t appear to have been substantively edited in more than a decade cites a BBC article from 2009 and notes that William Windsor’s successor “will receive a ration of two cigarettes per day, which he eats, but will not be permitted Guinness until he is older.”

The monarchy? I could take it or leave it. But we cannot let the royal goat tradition die. I’d go to war to defend it.