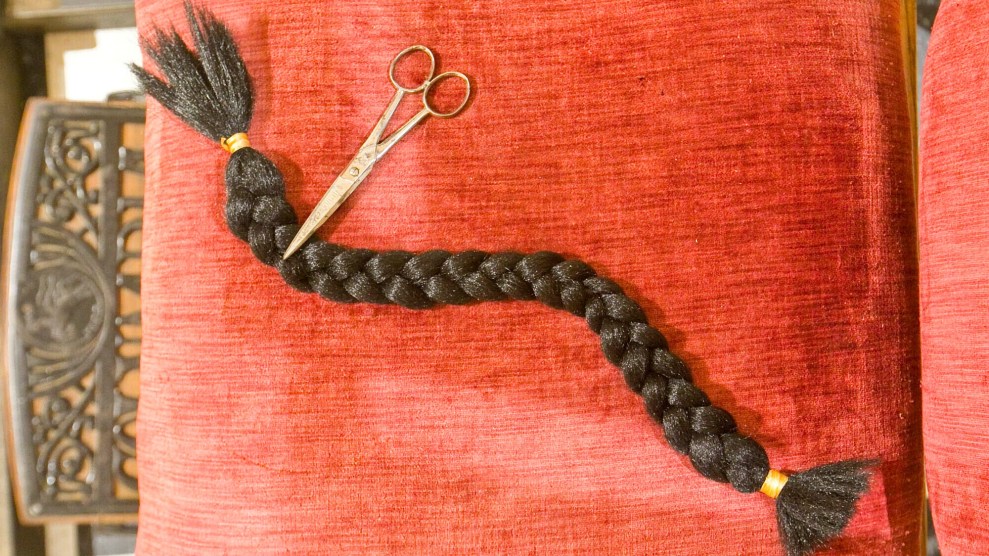 Six-year-old Phyllis Webstand wore an orange shirt to her first day of school. It was shiny, she remembers, and laced up the front—more importantly, it was a gift from her granny.

At the St. Joseph’s Mission Residential School in Williams Lake, British Columbia, it was taken from her, as were all the personal belongings she had known and loved. None were ever returned. That year, 1973, Webstand became one of hundreds of thousands of Indigenous children in Canada and the US to suffer at state-run and religious boarding schools designed to assimilate by force. In the words of Richard Henry Pratt, the first superintendent of the infamous Carlisle Indian School, it was possible to “kill the Indian in him, and save the man,” often by coercive conversion to Christianity and the forbidding of Native language.  Physical and sexual abuse were common.

In the United States, such schools operated for 150 years, the last closing in 1969. They have had a lasting impact on Native communities, from cultural and linguistic loss to intergenerational trauma. Children of people who attended the “residential schools” are more likely to have poor health outcomes, experience depression, and encounter abuse. Their story isn’t widely taught in schools. With “critical race theory” serving as grounds to ban works from Maus to a picture book by Ruby Bridges, the fight to change that may be a long one.

Friday marks the second US observance of the Day of Remembrance for Indian Boarding Schools, or “Orange Shirt Day,” which Webstand and fellow survivor Chief Fred Robbins started a decade ago, on the land now known as Canada. “The color orange has always reminded me of that,” Webstand told other Canadians in 2013, on the country’s inaugural Orange Shirt Day. “How my feelings didn’t matter, how no one cared and how I felt like I was worth nothing. All of us little children were crying, and no one cared.” The observance became a federal statutory holiday in Canada last year. It lacks official status in the US, but a resolution calling for federal recognition of Orange Shirt Day, sponsored by Sens. Lisa Murkowski (R-Alaska) and Elizabeth Warren (D-Mass.), recently passed the Senate.

The United States has dragged behind Canada in recognizing boarding schools’ role in Native genocide. In 2007, the Canadian government established a Truth and Reconciliation Commission to address residential schools’ legacy. That commission assembled a historical record of the schools and their impact, concluding in 2015 with 94 calls to action to facilitate “reconciliation” between Indigenous peoples and others on the land. But even that commission was the product of a settlement between Canada’s government and approximately 86,000 Indigenous people sent to residential schools between 1879 and 1997.

The United States has had no similar process, and it’s fallen to Indigenous women in office to act. Interior Department Secretary Deb Haaland, of the Laguna Pueblo, is the first Indigenous woman to run the agency that once oversaw residential schools. In May, her department released the first report in a multi-part investigation of their abusive practices; though not yet complete, it’s already the most comprehensive effort of its kind. Over 408 of these schools existed in the US, including in what are now the states of Alaska and Hawaii. Children as young as four were ordered to execute military drills and carry out manual labor, had their hair forcibly cut, and were made to use English names. Rules were often enforced through physical punishment, including solitary confinement, whipping, and starvation. To date, the investigation has found marked and unmarked graves on the grounds of 53 schools—the likely burial places of children who perished from disease or mistreatment. In Canada, investigators discovered the bodies of thousands of Indigenous children on the former sites of residential schools. The Interior Department appears likely to find the same.

In June, Kansas House Rep. Sharice Davids, a member of the Ho-Chunk Nation, introduced legislation to create a “truth and healing commission” on the residential schools, which would complement the Interior Department’s work and serve to advance the nation’s understanding of the lasting damage inflicted by Native boarding schools. Native people, of course, have preserved the memory of those atrocities. But much of the story has been buried, sometimes by survivors reluctant to reopen their wounds, and often by whitewashing campaigns like the “critical race theory” panic—which the US could begin to undo by acknowledging and documenting the record of genocide.