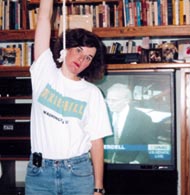 
Sticks and stones will break my bones, but watching 20 hours of C-SPAN almost sucked every drop of life from my body. Never suspecting that any harm could come of it, I eagerly accepted an assignment to watch 20 hours of C-SPAN for Mother Jones. I love politics, and despite a constant backlog of work and parenting responsibilities, I often, for a few minutes at a time, furtively nip at the hooch of C-SPAN’s public affairs programming.

Little did I know that 20 hours of C-SPAN are to regular time what cat years are to human time. The first hour of my 20-hour watch began with live Senate coverage. Sen. James Inhofe (R-Okla.) was arguing against U.S. participation in the chemical weapons ban because terrorists “by the very title…are not going to be complying with this.” He was obviously laying the groundwork for the “let’s not pass laws against theft, since thieves, by the very nature of their name, won’t comply” argument.

There was a fair amount of “debate” on the ban, but most of it consisted of senators thanking their opponents (inevitably referred to as “my good friend”) for their important work on this issue. Sometimes it seemed like the whole Senate might spontaneously close up shop and go camping together. They might get more done if they all hated each other.

Of course, their comments are entered into the record, but I can’t figure out who they were talking to before C-SPAN started televising their sessions. Often, there are hardly any other senators in the chamber. Even the Senate avoids the Senate, because it’s deadly dull in there. I was sorry I hadn’t taken pledges from my friends and neighbors to pay some worthy cause a couple of bucks per minute of my viewing time to make my marathon a more valuable experience.

Sometimes, when I would begin to feel sorry for myself, I’d take heart in the fact that at least I’m not a C-SPAN camera operator. For the rest of their lives they’ll probably break out in rashes whenever they hear the words “thank you, I’ll be brief.”

As it turns out, the debate I watched for the first couple of hours was the most scintillating viewing of the entire 20. After, I watched a press conference with President Clinton and Japanese Prime Minister Hashimoto; a press conference with Bruce Reed, Clinton’s domestic policy adviser (who appears to be 12 years old); and a congressional hearing on the postal service.

I’m not proud of how early I cracked.

At least during a press conference held by Senate Majority Leader Trent Lott (R-Miss.) I could feel that my life sucked for a reason. I still can’t see him without reliving the memory of his musical performance in that vest at the Republican National Convention. I have not lived a perfect life, but even I don’t deserve to have that image stuck in my head.

Eventually the Senate was on again. I know nothing about Senate rules or parliamentary law — other than, I think, “no spitting” — but I’d make a wild guess that I watched a filibuster. Sen. Paul Coverdell (R-Ga.) spoke at great length, with repetition for emphasis, on a no-duh bill that, when it did eventually pass, had hardly any dissenters. He took his glasses off and put them back on again about 50 times while standing in the same place addressing the presiding officer. It was like a highly sophisticated game of peekaboo.

The roll call, when all the senators rush into chambers to vote on legislation, was my favorite part. It looked like a particularly dull office party where people weren’t quite sure who to talk to. They needed a beach ball to pass over their heads like at a Jimmy Buffet concert. One by one the senators wandered up to the clerk in the front and cast their votes. Sen. Barbara Boxer (D-Calif.) votes with her purse on. Sen. Dianne Feinstein (also D-Calif.) often wears colors that bleed on camera. I could swear I saw Sen. Strom Thurmond (R-S.C.) pester and be rebuffed by more than one colleague. And Sen. John Kerry (D-Mass.) was never at rest working the room. I was impressed, but he may just have been looking for a ride home.

The Senate floor is definitely not where anything happens. Was it always this way, or did the Senate decide that if we were gonna be in there, they’d simply move their business to another room? Because C-SPAN is showing us the Senate chamber, we think we’re seeing the inner workings of government, but it’s a show — a remarkably poor show, but a show. There was obviously a hipper party down the hall. The real debates probably take place over a game of strip poker in a smoke-filled room with half-naked Democrats, fully clothed Republicans, buckets of money, and a cadre of lobbyists. I’ll bet each time another Democrat has to take off his socks, they all take a break, draw straws, and see whose turn it is to go bore the public on the Senate floor.