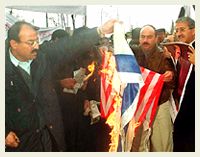 Imaginary, but plausible phone conversation between father and son over the hotline between the District of Columbia and Kennebunkport:

Son: “I’ve gotten a good start on domestic policy, Dad. I’ve brought back Reagan’s trickle-down supply-side thingie, and we’re going to suck so much oil out of those stupid wildlife refuges that we’ll bring back gas wars. But Colin says I haven’t given him anything to do overseas. I don’t want him thinking that I’m dissing him because he’s black, but I don’t really have any ideas for stuff for him to do.”

Dad: “You could always bomb Saddam [pronounced “SAD-dim”]. Worked for me — my approval rating shot up to 91 percent.”

Son: “But you lost the election.”

Once again, American and British planes last week rained explosives on teenagers, babies, and the elderly in the suburbs of Baghdad. Incidentally, a few Iraqi air force installations also happened to be struck. According to Bush administration officials, the bombings were provoked by the Iraqis’ locking their radars on Allied jets patrolling the southern “no fly” zone established at the end of the Gulf War.

Sen. Carl Levin, the ranking Democrat on the Armed Services Committee, noted, “This is a continuation of a policy — not a very satisfying policy, by the way, but the best that is available to us probably.”

We’ve been bombing Iraq for nearly a decade, and little or nothing has changed there. Saddam Hussein remains the nation’s undisputed leader, his political support undiminished by years of economic hardship and the endless bombing campaign. What remains mysterious is what the US and its European suck-ups think they’re accomplishing.

Aerial bombing is nearly as old as aviation. The Kaiser’s blimps dropped bombs on London during World War I. During the ’20s and ’30s, military analysts developed bombing strategies that remain in use today. The idea is that bombs dropped on military bases and industrial infrastructure weaken an enemy’s defenses, while those dropped on cities so demoralize the populace that they eventually turn their wrath on their own government.

The US Air Force primarily focuses on the second of these objectives when shooting metallic capsules full of explosives into the airspace of foreign countries. To hear military hacks going back to Gen. Westmoreland tell it, it’s only a matter of time before Iraqis get so bummed out by American bombs that they’ll rise up in a spontaneous revolution, overthrow Saddam Hussein’s regime and install a stable pro-American republic with a penchant for selling discounted drilling rights to international oil conglomerates. The trouble is that this has never, ever, worked.

The biggest saturation bombing campaign in the history of the planet was the American bombardment of North Vietnam during the late ’60s and early ’70s. We lost that one fair and square. During World War II, all of the major combatants attempted to bomb each other’s civilian populations into demoralization and political destabilization, but merely succeeded in radicalizing citizens who’d previously felt ambivalent about the whole fiasco.

The blitz brought war fever to Britain. Berliners despised Hitler’s Luftwaffe for failing to prevent Allied bombings, but numerous studies reveal that the Nazi regime was strengthened by the siege mentality resulting from aerial terror. Conventional saturation bombing of Japanese cities accomplished nothing; only atomic bombs, with their threat of total obliteration, brought about surrender.

Perhaps it’s impossible for Americans, who have never experienced it to understand why bombing never has the effect advertised by generals and the military contractors who sell them their bombs. An air war is particularly impersonal. Either a plane high above the clouds or a far-away missile launcher causes a house or a school or a car to disappear in a massive burst of fire and dust, followed by a terrifying hail of rubble. It can happen anytime, anywhere, without warning.

Eventually firefighters and ambulances arrive to put out the fires and treat the injured. The fire trucks and ambulances and the uniforms of their personnel bear the insignia of the ruling regime. Suddenly, the government is everyone’s friend. Even political opponents have to agree with the Leader when he appears on television to deplore the enemy’s arbitrary act of barbarity.

The perpetrators of the madness, on the other hand, are thousands of miles away. Safe with their spouses and children, in Washington and London, they remain silent about the suffering they’ve caused or they cite high-blown theories about and “collateral damage” and “encouraging the opposition.” Perhaps they’re stupid enough to believe this crap. Maybe they’re cynical creatures willing to murder innocent people for political gain. Regardless, the result is the same.

After the Feb. 16 bombings, Bush said, “We’re going to watch very carefully as to whether or not he develops weapons of mass destruction, and if we catch him doing so, we’ll take the appropriate action.” “He” and “him” are Saddam Hussein. Hussein never gets his ass bombed, though — American law prohibits the deliberate assassination of a head of state. It’s ordinary Iraqis who are the targets of “appropriate action.”

According to Iraqi media, Aliah Atshan Abdullah, 18, succumbed to her wounds in Baghdad’s al-Kandi hospital after being critically injured in the air strikes. As you read this, her parents, siblings, friends, and neighbors are obviously experiencing inconceivable grief. But don’t worry about them — if Mssrs. Bush, Cheney, and Powell are right, they’ll all be working to overthrow Saddam Hussein in no time.