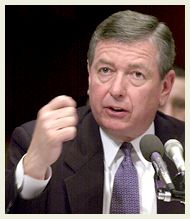 The chief value of Attorney General John Ashcroft’s anticlimactic appearance before the Senate Judiciary Committee on Dec. 6, was his naked public contempt for the First Amendment right to dissent, coming as it did after Ashcroft had repeatedly promised that the domestic campaign against terrorism would not threaten Constitutional rights.

“To those who scare peace-loving people with phantoms of lost liberty, my message is this: Your tactics only aid terrorists, for they erode our national unity and diminish our resolve. They give ammunition to America’s enemies…”

So much for the hearing. True, some senators asked pertinent questions, but many key developments were never addressed. Ashcroft left as he came — utterly confident in the overwhelming public support for his and the president’s shredding of the Constitution.

However, this support is based largely on the public’s chronic lack of knowledge of their own constitutional rights, let alone those of non-citizens. At the hearing, the senators could and should have started to show the American populace that citizens as well as non-citizens are candidates for the Bush-Ashcroft dragnet and its assault on the Bill of Rights.

For example, the attorney general was not asked about his resurrection of long-abandoned FBI practices — practices which were set aside because they were shown to be attacks on the First and Fourth amendments.

From 1956 to 1971, under an initiative known as COINTELPRO, the FBI infiltrated and disrupted political and religious groups supposedly linked to communism. Among them: anti-war and civil rights organizations, and other liberal groups dissenting from various government policies and operations.

In 1975, Senator Frank Church’s Select Committee on Intelligence Activities, after an extensive investigation, charged COINTELPRO with being “a sophisticated vigilante program aimed squarely at preventing the exercise of First Amendment rights or speech and association.”

The Church committee indignantly said that “The American people need to be reassured that never again will an agency of the government be permitted to conduct a secret war against those citizens it considers threats to the established order.”

But, as The New York Times and The Wall Street Journal have reported, that war against us has begun again as our protections against such activities are being eroded. Recent Justice Department orders suspend regulations — insisted upon by the Church committee — requiring the FBI to show probable cause before moving to monitor domestic political and religious groups. Today, the standards are likely to return to what they were during the days of the COINTELPRO operations.

The senators should also have confronted Ashcroft with the facts of the anti-terrorism bill he championed — The USA Patriot Act — which radically lowers standards for electronic surveillance of telephones, emails and other computer activities and which will effect untold numbers of citizens under the bill’s broad and vague definitions of terrorist activities, including “support” of terrorism.

Now, the attorney general has already said that criticism of his policies gives ammunition to America’s enemies, and most of Congress is clearly in fear of being targeted as disloyal and unpatriotic in the approaching 2002 elections. As a result, the only way we have to get enough members of Congress to bring back the Bill of Rights is to exert our own sustained pressure on them — as was done in the 1960’s — with teach-ins on campuses and at town meetings; newspaper ads; marches and virtual online gatherings. Similar efforts back then changed the direction of the nation, even when the majority of Americans did not at first support either the anti-war or civil rights movements. The same can be accomplished today.

During what passed for a debated on the anti-terrorism bill, the ACLU pulled together the largest and most diverse coalition of opponents to a bill I have ever seen. The members of that coalition — left, right and center — must not stay dormant if we are to avoid conservative Congressman Bob Barr’s prophecy that “this massive suspension of civil liberties will likely set precedents that will come back to haunt us terribly.”

Ashcroft speaks of “phantoms of lost liberty.” They are not phantoms to those already detained under the anti-terrorism campaign authorized by the bill.