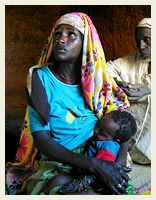 Sokoto, Nigeria – A little over a year ago, Safiya Huseini’s crime wasn’t even on the books. Now, the 35-year-old divorcee from a poor village in northern Nigeria faces death by stoning.

“Nobody is happy about this,” says her blind father, Huseini Danwanzam, 75. “There is no justice.”

Huseini’s sentence — she was convicted of adultery because she was found to be pregnant — is the harshest and most controversial handed out in Nigeria’s Muslim-dominated north since states there began adopting a hard line Islamic code in January of 2000. The authorities have yet to stone anyone, but they have conducted several amputations. The first execution carried out under Sharia law came last January, with the hanging of a convicted murderer.

Public support for Sharia law in the northern states has largely been the result of popular discontent with the country’s faltering and corrupt justice system. Ruud Peters, a University of Amsterdam expert on Islamic law who has advised Huseini on her case, says that almost all of the countries that introduced the religious codes in modern times — Libya, Pakistan, Iran and Sudan — did so as the result of a systematic campaign by political leaders looking to cement their nation’s Islamic identity. Not so in Nigeria, where the adoption of Sharia law by 11 northern states was all but forced upon often-reluctant governors by a population tired of crime and corruption.

“People have this idea that when you introduce Islamic law, moral standards will be higher,” Peters says. “And if you punish offenses severely, that will deter crime.”

The country is made of two religious blocks, which were joined by the English in the early 20th century. While the coastal south is largely Christian or animist, Islam has been dominant in northern Nigeria for centuries. Sharia codes were enforced in northern Nigeria until 1960, when they were outlawed by the country’s British government (London had banned amputation, stoning and crucifixion much earlier). While religious courts continued to hold sway in family law, it was not until 1999, when Nigeria cast off decades of military dictatorships in favor of a civilian government, that states began reintroducing the Islamic penal code.

“Nigeria went through 20 years of military rule,” says Sanusi L. Sanusi, a Nigerian banker and Islamic scholar. “People were looking for a reason for hope.” Then, as now, lawlessness prevailed. Armed robbers stopped cars and busses or pillaged whole city blocks. Ordinary people saw the police only at roadblocks, inspecting papers, demanding money. In the south, the public turned to brutal ethnic vigilantes for security. In the north, they turned to Sharia.

The states’ path toward Sharia has not been uniformly smooth. The move to adopt Sharia touched off widespread violence in the northern state of Kaduna, where more than 2,000 people were killed in several days of rioting and religious conflict. Nigeria’s president, Olusegun Obasanjo, decried the violence but has been unable or unwilling to take action to back up his criticism.

Recently, with Obasanjo appearing weakened by a new spasm of religious and ethnic violence, the president has finally taken aim at politicians who he says are deliberately inciting conflict for political gain, reportedly calling those involved in the fighting “foot soldiers of cynical political strategists.” Still, Obasanjo appears entirely unwilling to openly call for the northern states to modify their various interpretations of Sharia.

Some northern politicians initially balked at adopting the Sharia code. Others, appreciating the public appeal that Islamic law carried, were quick to embrace the public crusade. The first to do so was Ahmed Sani, the newly-elected governor of Zamfara State. Sani’s introduction of Sharia vastly boosted his popularity, allowing him to claim a spot on the national stage as its most ardent proponent.

Sani’s freshly-minted reputation as a champion of law and order is ironic. During Nigeria’s 15-years of military dictatorship of, Sani held several posts at Nigeria’s Central Bank. His tenure came at a time when the country’s top brass were draining Nigeria of billions in oil revenue, deepening its poverty and shortchanging its infrastructure — including the police force. And Sani’s hands were far from clean. In 1999, he described to a group of foreign journalists how he took kickbacks from military officers (he has since denied it). With the end of military rule in 1999, Sani used his ill-gotten gains to buy votes in the race for Zamfara’s governorship.

Now, Sani is using his new Islamic standing to further his political career. Sani has sought to discredit his fellow northern governors — all potential adversaries on the national stage — by suggesting that several have only embraced the Sharia code to further their political careers. Within Zamfara State, Sani has even used Islam — and the longstanding tensions between south and north — to move against supporters of his political opponents. One British newspaper even reported Sani threatened to wage a “jihad” against his political adversaries.

Not surprisingly, neither Sani nor any of Nigeria’s other famously corrupt politicians have been charged with any crimes under Sharia. And even if they were, they wouldn’t face amputation or stoning. While stealing a goat can cost you your hand, the Islamic criminal code punishes embezzlement by a public official with lashes, fines or imprisonment.

When it comes to daily enforcement, the decks of Nigeria’s version of Sharia are further stacked against the nation’s poor. Lashings for infractions such as drinking and disturbing the public peace are doled out daily. Huseini was convicted based on the simple evidence that she was pregnant (her partner, who she accuses of rape, was set free). Only women like her, with no access to sex education or abortions, need let a swollen belly bear witness against them.

Sanusi, who supported the introduction of Sharia law, is now urging restraint.

“Ultimately, as long as you don’t address the problems of the people, people will lose faith in the system,” he says. There are already signs that the public faith in Sharia is slipping. A goat-thief who had his hand amputated claims he deserved his punishment, but only after he was promised about $400 dollars following his operation, a large sum in a country where the average income is less than $1 a day. He continues to receive assistance. Another man sentenced to have his hand amputated has renounced Islam, hoping to escape punishment.

The strict social mores imposed by Sharia are also followed in a less-than-rigid manner in much of northern Nigeria. In Zamfara, women are forced to wear body-covering veils, single-sex schools have been introduced and drinking alcohol is prohibited. Yet bars in special military zones — areas administered by the nation’s powerful army leadership which are exempt from state or local laws — are sufficiently reliant on Muslims to see a sharp slump in trade during the holy month of Ramadan.

Suggesting that the pattern is a familiar one seen in other countries that adopted Sharia law, Peters says he expects the prosecutorial zeal to subside in northern Nigeria. Libya and Pakistan, he says, never enforced the harsher Islamic penalties, while Sudan and Iran used them only shortly after their introduction. Moreover, Peters argues that Nigeria has a strong Western legal tradition which Sharia will not completely erode.

Still, that softening of attitude may not come in time to save Safiya Huseini. She has appealed her sentence, and has changed the basis of that appeal from saying she was raped to attributing her pregnancy to her husband, whom she divorced two years before becoming pregnant. That tactical shift came after prompting from Peters, who notes that under Nigeria’s brand of Islamic law, a pregnancy can be concealed for up to 7 years.

“You have to play by their rules,” he says. “It’s difficult to undo a path of Islamization. The only thing you can do is cut off the sharp edges.”