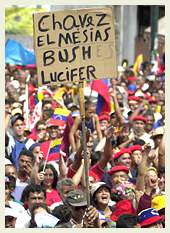 CARACAS — At least 17 Venezuelans were killed in the days before and after this country’s short-lived coup last month, and it’s now becoming clear that, at least among the many supporters of now-reinstated president Hugo Chávez, the upheaval has claimed another victim: the already fragile reputation of the United States.

The Bush administration has denied any involvement in the April 12 coup, and no clear evidence to the contrary has been unearthed. Still, Chávez loyalists on the streets of this capital city of nearly 2 million say they remain convinced that the US supported and sponsored the attempt to topple the country’s populist president.

“What we saw here was the United States sticking its hairy hands into our business,” says Ruth Cartaya, a graduate student in social work at the Central University of Venezuela. “The events were definitely orchestrated. Somebody spent a lot of money on this coup, and it looks like the CIA was trying its old tricks here.”

Admittedly, Washington’s standing did not have far to fall among Venezuelans who support Chávez. The White House has never concealed its dislike of Chávez, a former paratrooper who himself led an unsuccessful coup in 1992 only to capture the presidency as a populist candidate six years later. Chávez has angered the US by forming close ties with Cuba, Iraq and Libya. Last year, Washington issued a strident rebuke of the Venezuelan leader for his criticism of the US-led bombing campaign in Afghanistan.

“We all know the gringos don’t like Chávez,” says street vendor Eduardo Sanchez. “He stands up to them and they don’t like it. They are used to pushing people about, but he’s a real man and he tells them where to go.”

Despite the past half-decade of chilly relations, the US has remained one of Venezuela’s most important trading partners, buying some 1.5 million barrels of Venezuelan oil each day. For Chávez loyalists, however, that oil trade has become an accepted motive for Washington’s involvement in the coup. Under Chávez, Venezuela has aggressively lobbied OPEC, the organization of oil-producing states, to introduce production cuts in order to boost prices. By toppling the government, Chávez supporters argue, the US hoped to keep oil prices in check.

“The gringos think they can just walk in here and take our oil,” ice cream seller Héctor Guarenas says. “But the president won’t let them and he’s right. Why should they get things cheap when they’re rich already?”

New allegations about US involvement in the coup appear regularly in the Venezuelan press, allegations which are routinely rejected by an increasingly harried US embassy in Caracas. Although Washington officials have admitted to meeting or communicating with several of the coup leaders in recent months, a US spokesperson dismissed allegations by Chávez supporters that the meetings were covert coup-planning sessions as “ridiculous and without foundation.”

Chávez himself has fueled the popular speculation about Washington’s role in the coup, claiming that he saw a plane with US markings at the remote island military base where he was held by backers of the coup. Chávez has said the plane was a private craft, but he has called for an investigation into its presence on the Caribbean island of La Orchila. Supporters of the president, including many of the residents of Caracas’ desperately-poor barrios, say they don’t need any investigation: they are convinced that the plane was part of a sinister US plot.

“They were going to take him off to the United States like [former Panamanian dictator Manuel] Noriega,” says Jaime Azuaje, a shoe shiner. “If the people hadn’t saved him, the yanquis would have taken our president away.”

Many Chávez supporters also point to Washington’s reaction to the coup as proof of US complicity. While the White House did not publicy support the ouster of Chávez, it suggested the president was partly to blame for his fate and dispatched US Ambassador Charles Shapiro to meet with Venezuela’s interim president, Pedro Carmona, shortly after the coup.

“They definitely had their dirty hands in it all,” says Dr. Daniel Patiño, a surgeon in a state-run hospital in Caracas. “In fact, more than their hands, their whole body, right down to their feet.”

Although Chávez has preached reconciliation since his return to power, many of his staunchest supporters claim the coup simply confirmed their belief that the country’s wealthy business leaders are in league with the US to prevent the president from pursuing his populist agenda.

“For the first time in many years the poor and marginalized felt they belonged, that they actually had a president that was theirs and that they were prepared to defend,” Cartaya says. “And it has also … made us more anti-yanqui. It unmasked the US’s urge to intervene in Latin America and we all know whatever the US had in store for Venezuela, it wasn’t going to be anything positive.”