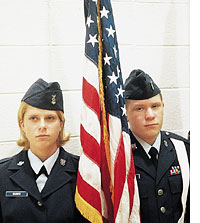 Sharon Shea-Keneally, principal of Mount Anthony Union High School in Bennington, Vermont, was shocked when she received a letter in May from military recruiters demanding a list of all her students, including names, addresses, and phone numbers. The school invites recruiters to participate in career days and job fairs, but like most school districts, it keeps student information strictly confidential. “We don’t give out a list of names of our kids to anybody,” says Shea-Keneally, “not to colleges, churches, employers — nobody.”

But when Shea-Keneally insisted on an explanation, she was in for an even bigger surprise: The recruiters cited the No Child Left Behind Act, President Bush’s sweeping new education law passed earlier this year. There, buried deep within the law’s 670 pages, is a provision requiring public secondary schools to provide military recruiters not only with access to facilities, but also with contact information for every student — or face a cutoff of all federal aid.

“I was very surprised the requirement was attached to an education law,” says Shea-Keneally. “I did not see the link.”

The military complained this year that up to 15 percent of the nation’s high schools are “problem schools” for recruiters. In 1999, the Pentagon says, recruiters were denied access to schools on 19,228 occasions. Rep. David Vitter, a Republican from Louisiana who sponsored the new recruitment requirement, says such schools “demonstrated an anti-military attitude that I thought was offensive.”

To many educators, however, requiring the release of personal information intrudes on the rights of students. “We feel it is a clear departure from the letter and the spirit of the current student privacy laws,” says Bruce Hunter, chief lobbyist for the American Association of School Administrators. Until now, schools could share student information only with other educational institutions. “Now other people will want our lists,” says Hunter. “It’s a slippery slope. I don’t want student directories sent to Verizon either, just because they claim that all kids need a cell phone to be safe.”

The new law does give students the right to withhold their records. But school officials are given wide leeway in how to implement the law, and some are simply handing over student directories to recruiters without informing anyone — leaving students without any say in the matter.

“I think the privacy implications of this law are profound,” says Jill Wynns, president of the San Francisco Board of Education. “For the federal government to ignore or discount the concerns of the privacy rights of millions of high school students is not a good thing, and it’s something we should be concerned about.”

Educators point out that the armed services have exceeded their recruitment goals for the past two years in a row, even without access to every school. The new law, they say, undercuts the authority of some local school districts, including San Francisco and Portland, Oregon, that have barred recruiters from schools on the grounds that the military discriminates against gays and lesbians. Officials in both cities now say they will grant recruiters access to their schools and to student information — but they also plan to inform students of their right to withhold their records.

Some students are already choosing that option. According to Principal Shea-Keneally, 200 students at her school — one-sixth of the student body — have asked that their records be withheld.

Recruiters are up-front about their plans to use school lists to aggressively pursue students through mailings, phone calls, and personal visits — even if parents object. “The only thing that will get us to stop contacting the family is if they call their congressman,” says Major Johannes Paraan, head U.S. Army recruiter for Vermont and northeastern New York. “Or maybe if the kid died, we’ll take them off our list.”