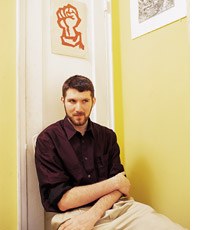 Eli Pariser wanted his speech to the hundreds of thousands of protesters gathered in New York City last February to appeal to the highest common denominator — “ordinary, patriotic, mainstream Americans” who were against an invasion of Iraq. So before drafting his address, the 22-year-old director of the MoveOn anti-war campaign appealed to the collective wisdom of his group’s 750,000 members.

“What’s the message we should send to the folks in New York City and the news media?” Pariser asked in a mass email, which included a link to an online discussion forum. Rifling through the nearly 1,000 responses, Pariser found his inspiration. Many of our citizens, he would declare at the protest, “deeply believe that a war against Iraq will not make this country safer.” Then, in his steady baritone, he quoted one contributor directly: “We recognize that the American spirit is not always represented by the American government.”

You wouldn’t expect such measured rhetoric from a scruffy indie-rock fan who not long ago was chanting anti-globalization slogans and confronting riot police at World Bank meetings. Yet Pariser is nothing if not a fast learner. The son of two 1960s activists who founded an alternative high school in Camden, Maine, Pariser graduated from college at 19. His stint as an in-your-face radical ended early, too, after kibitzing for a few hours with D.C. cops at an anti-IMF rally in April 2000. “All of a sudden, I realized that the scripted confrontation of attacking and antagonizing them wasn’t going to get us anywhere,” Pariser says. “It changed the way I was thinking, tactically.”

So in the immediate aftermath of September 11, when he wanted to protest the president’s demand for vengeance, Pariser created an online petition, 9-11peace.org, which urged “moderation and restraint.” In what would prove a powerful lesson in online organizing, Pariser emailed the link to 30 friends. They did likewise, and so did their friends. “A few days later I got a call saying the site was crashing because too many people were logging on,” Pariser recalls. Within two weeks, more than half a million people had signed the petition, and Pariser was fielding calls from the BBC and the South China Morning Post.

He also heard from Wes Boyd, the founder of MoveOn. Boyd’s Internet activist group had gotten its start during the Monica Lewinsky scandal — calling on Congress to censure the president and “move on” — and had since thrown its weight behind progressive candidates. A former software exec who made a small fortune off flying-toaster screensavers, Boyd offered Pariser both tactical and financial support. “Eli was in the same place as we were when we got started,” he says. “We got in touch and said, ‘Can we help?'”

The two soon merged their websites. And as the showdown with Iraq started heating up, Boyd hired Pariser to direct MoveOn’s international campaigns. Working 18-hour days, Pariser organized 9,000 activists to meet with their representatives in Congress last November. He also helped raise more than $400,000 for anti-war advertising. The lanky, 6-foot-3-inch Pariser has since found himself in the company of some of the world’s leading peaceniks. At February’s rally he shared the podium with Nobel Peace Prize winner Desmond Tutu and Martin Luther King III. His speech lacked the fiery idealism you’d expect from the youngest man onstage. “I don’t want to be part of the Great Left Martyrdom story,” Pariser explains, “where we simply say, ‘We fought the good fight and we lost.’ I don’t want to be on the losing side.”

His tactics have had a powerful influence, especially among his peers in the anti-war movement. “I write books and spray paint the sidewalk and get arrested,” says renowned hip-hop activist and author William Upski Wimsatt. “But because of Eli and MoveOn, a whole group of us in the progressive community are changing our strategy and looking seriously at electoral politics and Internet organizing.”

A visit to MoveOn’s New York office really got Wimsatt thinking. Upon arriving at the door, he was ushered into the 8-by-10-foot room where Pariser sleeps. “There was a little desk, a little bookshelf, a chair, and a laptop,” says Wimsatt. “I’m like, ‘Okay, let’s go see your office.’ But he’s like, ‘This is it.’ I was stunned — the most effective progressive political force today is coming out of this 22-year-old kid’s bedroom.”