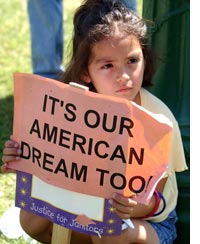 Every candidate in California’s dark recall-election comedy should be obliged to answer the question: “Whither Duroville?”

“Duroville” is the California visitors never see and that pundits ignore when they debate the future of the world’s sixth largest economy. Officially this ramshackle desert community of 4000 people in the Coachella Valley doesn’t even exist. It is a shantytown — reminiscent of the Okie camps in The Grapes of Wrath — erected by otherwise homeless farmworkers on land owned by Harvey Duro, a member of the Cahuilla Indian nation.

The Coachella Valley is the prototype of a future — Beverly Hills meets Tijuana — that California conservatives seem to dream of creating everywhere. The western side of the Valley, from Palm Springs to La Quinta, is an air-conditioned paradise of gated communities built around artificial lakes and eighteen-hole golf courses. The typical resident is a 65-year-old retired white male in a golf cart. He is a zealous voter who disapproves of taxes, affirmative action, and social services for the immigrants who wait on him.

The east side of the Valley, from Indio to Mecca, is where the resort maids, busboys, pool cleaners, and farmworkers live. There is an artificial mountain built out of 500,000 tons of sludge (solid sewage) trucked in from Los Angeles, but nary a blade of grass. In Duroville the largest body of water is the sewage lagoon and the local playground is a dioxin-contaminated landfill. The typical resident is 18 years-old, speaks Spanish or Mixtec, and works all day in the blast-furnace desert heat. She/he, most likely, is not yet a citizen and therefore ineligible to vote.

Squalor, exploitation and disenfranchisement are not just anomalies of California’s agricultural valleys and “factories in the field.” There are urban Durovilles as well, like the sprawling tenement district just a few blocks west of downtown Los Angeles. On the gilded coast north of San Diego, an estimated 10,000 immigrant day-laborers and service-workers sleep rough in the wild canyons behind $800,000 tract homes. Throughout the state, hundreds of thousands of immigrant workers live in illegal garage conversions, derelict trailers, even chicken coops.

Economic inequality has soared in the last generation, particularly in the southern half of the state. In the Los Angeles area, for example, the top 20% of the workforce earns twenty-five times more on average than the bottom 20%. Similarly, a third of Los Angeles residents lack medical insurance and must depend on a handful of overcrowded county hospitals whose doctors have recently given chilling testimony about the rising number of needless deaths from shortages of staff and beds.

This Third World California, which Duroville poignantly symbolizes, is no accidental creation. The famous tax revolt of the 1970s was racial politics coded as fiscal populism. As the Latino population soared, white voters — egged on by rightwing demagogues — withdrew support from the public sector. California became a bad school state in lockstep with becoming a low wage state. Overcrowded classrooms and dangerous playgrounds are part of a vicious circle with sweatshop jobs and slum housing.

The California labor movement, reinvigorated by a new generation of organizing, has fought to halt creeping “Mississippization” with living wage ordinances, increased school spending, and the closure of tax breaks for the rich. There have been some victories (mainly in funding education), but progressive politics fights uphill against two huge structural obstacles.

The first is the legacy of Proposition 13 itself which requires supermajorities to raise most taxes. The second, and more daunting, is the glacial pace of the enfranchisement of new immigrants. Although Anglos are now a minority of the population, they still constitute 70% of the electorate. Even in 2040, according to the projections of the Public Policy Institute of California, whites (only 35% of the population) will still cast 53% of the votes. If current trends continue, this geriatric white minority will also consume a majority of entitlements and tax resources.

The conservative worldview, of course, inverts these realities. Led by former governor Pete Wilson, Republicans argue that the state has become a dumping ground for shiftless and uncultured beggars from the South. Mexico, as depicted in a notorious Wilson campaign ad (“They’re coming!”), is invading Anglo California and imposing huge tax, crime and pollution burdens upon its honest burghers. The true wretched of the earth are long-suffering, overtaxed white guys in their golf carts.

Reason dies screaming in the face of such nonsense, but it is peddled twenty-four hours a day by the pit-bull talk-show hosts who dominate California AM radio and, increasingly, commercial television. White rage is also the steroid that Republican strategists hope will pump up Arnold Schwarzenegger for heavy lifting in the November recall. Liberal commentators have attacked the movie star for his singular lack of articulate positions on decisive issues. But the criticism is unfair.

The Terminator, in fact, has a long history of ideological commitment which, for tactical reasons, his campaign-minders want to downplay. Most striking has been his extensive involvement in the nativist crusades to deny health care and education to undocumented immigrants, and to make English the exclusive official language. The poor boy from the Alpine boondocks was a key endorser of anti-immigrant Proposition 187 in 1994, and, even more sinisterly, a longtime board member of U.S. English, a national organization with notorious ties to men in white hoods.

But it would be a mistake, in any case, to think that Arnie is the actual star of his latest and most lavish film. As all the punters in Sacramento have pointed out, the real title should be: “Return from the Grave: Wilson Part Three.” The ex-governor is the specter haunting the recall.

His veteran staff (including George Gorton who ran Boris Yeltsin’s reelection) control all the important strings moving Schwarzenegger, while Wilson himself drives a sales campaign which has successfully recruited most of the billionaires in the state. As a result, the inner circle of Schwarzenegger’s “populist” crusade looks like a Bohemia Grove toga party: Donald Bren, George Schultz, David Murdock, Warren Buffett, and so on.

Wilson, of course, is an anathema to Latinos, Blacks and the labor movement. Supposedly California had done with his racist divisiveness when voters in 1998 rejected his protégé, attorney general Dan Lungren, and then, last year, when they voted down another wealthy Wilson clone. So who forgot the silver stake?

Now that the rats are on dry ground, it has been easy for many Democrats to dismiss incumbent Gray Davis as a singularly unfortunate choice: a charisma-less robot with an open palm who let the state be pillaged by Enron during the phony energy crisis three years ago.

But again in fairness, Davis exemplifies precisely those qualities — pro-corporate, politically centrist, and hard law-and-order — which the Democratic Leadership Council has so long recommended as the salvation of the Democratic Party. Nor is his disintegration unique: just look at the other “moderate” Democrats dead in the starting blocks of the presidential primary.

This is why the labor wing of the California Democrats should have embraced the opportunity of the recall to push forward one of their own. Davis has generally been detested by union activists. Yet the state federation of labor, and almost no one else, remained pathetically loyal to His Grayness and allowed his cunning and unprincipled lieutenant governor, Cruz Bustamante, to run off with the party endorsement.

Bustamante may be preferable to Pete Wilson hiding inside the Trojan horse called Schwarzenegger, but the difference is probably less than most Democratic voters imagine. Some years ago, Bustamante got into a pissing contest with (then governor) Wilson. They were talking about amending state law to allow the execution of minors. When Wilson suggested death sentences for criminals as young as 14, Bustamante responded that he might “with a tear in my eye, cast a vote to execute ‘hardened criminals’ as young as 13.”

The major alternative to child killers is California’s Green Party. In last year’s gubernatorial election, Green candidate Peter Camejo won 5% of the vote and emboldened thousands of progressives to envision life-after-the-Democrats. Camejo, a veteran of Berkeley in the 60s, retains a fire in his belly and chased around the state playing Michael Moore to Gray Davis’s “Roger.” He’s one of the first Greens to make some impact in unions and amongst Latinos.

Unfortunately much of the media attention that otherwise might have accrued to the Greens has been hijacked by Arianna Huffington, running as an independent. A professional television guest and columnist, formerly married to one of the state’s richest Republicans, she’s undertaken an unusual journey in the desert of American politics: moving from the far right to the moderate left. Huffington, for example, has been an eloquent and effective critic of the Bush war on terror.

But unlike Camejo, selected by a poll of the Green membership, she is strictly freelancing with the aid of Hollywood money and her privileged access to media. Her populist credibility, moreover, has been diminished by the revelation that, although she owns a $7 million mansion, she has paid virtually no income tax in recent years. The most likely effect of her candidacy, despite promises to coordinate with Camejo, will be to reduce rather than enhance the left-of-the-Democrats vote.

Regardless of the outcome in November, the recall battle has already clarified some of the new terrain of California politics. Republicans, on their side, have gained tremendous confidence in their ability to thwart any future legislative effort toward tax reform or economic justice. Liberal Democrats, on the other, have had their faces rubbed in the moral rot of their party. In Duroville, meanwhile, they look across their sewer lake at the fat life of a rapidly receding California dream.

This column first appeared on TomDispatch.com