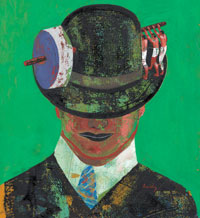 Does it matter that America
keeps getting economically
more unequal? The process has been going on for more than two decades, although
it slowed briefly during the late 1990s as wages rose with the boom. And, no surprise,
the gap between rich and poor has widened under the Bush administration, through
recession, jobless recovery, and grotesquely lopsided tax cuts. Measured by assets — the
aggregate of property, savings, and investments, a more accurate yardstick than
income — the level of inequality in America today is staggering: The top 1 percent
now own 38 percent of the nation’s wealth, while the bottom 40 percent own 1 percent.
In other words, the richest 3 million Americans put together are nearly 40 times
richer than 113 million of the rest of us.

But you already knew this, or something like it.
Inequality is like campaign finance or health insurance — one of those slow,
wasting diseases in the body politic that seems to have no cure. In the last decade,
a flurry of books and reports about inequality were published, and all the while
the gap kept growing. The condition is so basic, so endemic to the current condition
of our democracy, that it rarely gets a mention any longer in the press. The very
word “equality,” arguably the key word in the most important documents of American
history, has been haunted by the specter of forced redistribution in the modern
era, which may be why it’s taboo in the mouths of politicians. Jefferson and Lincoln
could use it, but when did you last hear it on the campaign trail?

I myself have no qualms about redistribution;
I regard the spread of wealth and income as dubiously legitimate, arbitrary if not
outright coercive, and far more alienable than the rights of life and liberty. Great
gaps in wealth are not only morally repellent, but incompatible with the social
cohesion a healthy democracy requires, and I would welcome legislation that capped
the ratio of CEO to worker pay at, say, 20 to 1 (as opposed to the current
500 to 1). In this sense, I suppose, I stand convicted of harboring un-American
sentiments, and I know they have no chance of being taken seriously, because this
is still a country devoted to the notion that human beings make their own fates.
That’s why the belief that everyone starts out with an equal opportunity is part
of the civic religion.

There is a case — a very American
case — to be made against inequality. But several factors have kept the issue
relatively quiet even when the problem has been glaringly evident. The first is
political and partisan. For a long time, conservative pundits, think tanks, and
politicians basically denied that inequality existed: The rich might be getting
richer but the poor were hardly getting poorer. Once economic data during the first
Bush recession made it impossible to deny that real wages were stagnating or even
declining against inflation, the argument changed: Yes, the rich are getting richer
a lot faster than the poor, but in concrete terms it’s still much better to be poor
or working class than it was even during the great egalitarian heyday of the postwar
years. A corollary of this claim is that inequality itself is a spurious category.
Thus Jonah Goldberg, editor of National Review Online, imagines a republic composed
of Bill Gates and himself: “The disparities of wealth in our nation would be worse
than those in Brazil, Nigeria or even — gasp — the United States.” But the
bottom 50 percent — i.e., Jonah Goldberg — “could live quite well in Gatesbergia,”
doing menial labor for decent pay. In other words, the relative condition of the
other half doesn’t matter; only their absolute condition matters, and if Wal-Mart
“associates” have TVs and VCRs at home, who cares whether the five heirs to the
Wal-Mart fortune stand to inherit $19 billion apiece tax-free while full-time employees
make $8 an hour?

Leave aside the absurdity of a New
York journalist standing in for the working poor; leave aside, too, the meaninglessness
of the phrase “live quite well.” The argument taps into a basic American resistance
to economic leveling. None of the illustrious champions of the common man in our
political history wanted to punish the rich and reward the poor simply to make things
more equal. In his Second Inaugural, Jefferson declared that government should preserve
“that state of property, equal or unequal, which results to every man from his own
industry or that of his fathers.” Even William Jennings Bryan, the Great Commoner,
in accepting the Democratic nomination in 1896, said, “We believe, as asserted in
the Declaration of Independence, that all men are created equal; but that does not
mean that all men are or can be equal in possessions, in ability, or in merit; it
simply means that all shall stand equal before the law.” This is what Alexis de
Tocqueville meant when he summed up American democracy in the two words “born equal”:
civic equality, social equality, the refusal of Americans to regard themselves as
anyone’s inferior.

The social reforms of the 20th century,
from the Progressive Era and the New Deal to the Great Society, recognized that
equality before the law, as Jefferson and Bryan and de Tocqueville understood it,
isn’t enough under modern capitalism: Government has an obligation to soften its
worst blows. But the deeper belief never changed: The race goes to the swift. So
what if a country famous for its creed of human equality has the most lopsided distribution
of wealth in the developed world? We allow economic inequality because we believe
in social equality — in the basic fairness of the race.

It’s this last consideration that makes
it so hard to get attention for the problem of inequality. As long as unequal results
are considered legitimate, anything done to mit- igate them — or even to raise
them for discussion — can be dismissed as envy, or class warfare, or economic
quackery.

It’s not as if there are no remedies.
A few months ago, Ray Boshara of the New America Foundation and Washington University
professor Michael Sherraden proposed the creation of a $6,000 investment fund for
every child born in the United States; with the right portfolio it would yield 7
percent annually, eventually paying for higher education or a first home or a start-up
business. Unlike the minimum-income schemes of the early ’70s (it was Richard Nixon
who proposed to give low-income people, working or not, cash payments of up to about
$650 a month in today’s dollars), the American Stakeholder Account would redistrib-ute
opportunity, not just money. It would give poorer families access to what they most
acutely lack — lifelong assets. Other ideas (a luxury tax; a major increase
in scholarship money for middle- and lower-income students; a tax on the wealthy
that automatically increases when inequality gets worse) can be found on the valuable
website www.inequality.org.

Unfortunately, proposals like this
never seem to make it out of wonky papers and into legislation or stump speeches.
But it’s in this territory — increasing equal opportunity, not forcing equal
results — that the case against the status quo has to be made. The American
instinct against leveling is matched by an American instinct for fairness. When
results grow as vastly disparate as they have in recent years, equal opportunity
becomes an empty promise, a nice phrase without substance. And the race is becoming
less fair by the day, as the administration and the Republican Congress seek to
remove any mechanism that might give working people a chance to prosper. To finance
the administration’s tax cuts, the House majority’s main spending bill for the coming
year cuts funds for economic development, for housing, for child care, for transportation,
for job training. The Republican leadership has broken its own promise to increase
education spending next year by $3 billion, lowering the amount to $2.3 billion.
The list goes on, even to the minor decisions that the administration hopes won’t
be noticed. Earlier this year, after Bush slashed taxes on the richest Americans,
his Department of Education issued a regulation cutting the amount that college
students and their families can deduct from state and local taxes under the financial-aid
eligibility formula. It’s the kind of detail that reveals a whole philosophy of
governing.

What Bush and Congress are doing only
accelerates, by conscious decision, the long-term demise of equal opportunity. One
by one over the past three decades, all the means that traditionally worked to level
the playing field have grown weak or disappeared: the decent public school; the
labor union; the progressive income tax; the federal social program such as the
GI Bill, Head Start, job training. Take just one example: higher education. The
SAT was widely introduced after World War II to make elite universities more meritocratic.
Harvard President James Bryant Conant, an early proponent of the exam, gave a speech
in 1940 in which he argued that “the requirement is not a radical equalization of
wealth at any given moment; it is rather a continuous process by which power and
privilege may be automatically redistributed at the end of each generation.”

Conant’s idea was for higher education
to replace the frontier as the great source of equal opportunity in America. But
the college board exams only created a new source of privilege — based on educational
and professional attainment, and almost as hard to enter and leave as the older
aristocracies.

No one today can seriously claim that
power and privilege are “automatically redistributed” between generations — nor
can they ever be, as long as the quality of your public education is determined
by the property values in your neighborhood. The difference between Conant’s era
and ours is that the very idea of making redistribution possible is no longer in
play. The notion that a fundamental American value is mocked by the economic arrangement
in which we all now live is regarded as a fringe position.

The disappearance of equality can’t
be entirely proved with charts and graphs, but people know it when they don’t see
it, and I would maintain that most Americans are aware that we are tolerating a
chronic, low-grade national scandal. Ultimately it threatens the basic sense of
justice and unity on which democracy depends. The coming presidential campaign could
at least provide this public service: to rehabilitate an antique, indispensable,
and now practically discarded word.