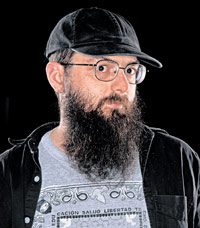 Pete Tridish is only 34, but he’s got a cast-iron way of connecting with people decades older: He asks them about their favorite radio experiences. On a cold winter’s night in Great Barrington, Massachusetts, where 50 people have gathered at the First Congregational Church to talk about starting a community radio station, the reminiscences come bubbling out—the station in San Francisco that kept its listeners up-to-date on Vietnam demonstrations, the obscure recordings on Symphony Sid’s late-night jazz show in New York City. A man in his early 70s, his voice warm with the memory, talks about spending his nights during high school listening to Jean Shepherd in Cincinnati, before the legendary storyteller moved to New York. “He created a real community of listeners,” he says, and laughs. “There were suicides after he left town.”

Reviving the sort of personal connection that good radio once created is the reason Tridish has driven here from Philadelphia. The T- shirts he’s laid out in the church hall make his goals clear. A logo of a radio mic in flames is surrounded by the words “Prometheus Radio Project. How many ways have we fought corporate radio…Today?”

Prometheus, which consists of Tridish and two colleagues, has become a guiding light for community groups around the country hoping to launch low-power FM stations. Tridish & Co. provide technical advice, help with the licensing process, and even organize radio “barn raisings,” at which low-power activists from around the world converge on a community for three days to get a new station up and running. Just a few weeks before his trip to Great Barrington, Tridish had been in Florida, working with the Coalition of Immokalee Workers—the farmworker activists leading a boycott of Taco Bell—to build a station of their own.

Prometheus has also drawn national attention as the lead petitioner in a suit to block an FCC directive increasing the number of media outlets a single corporation can own in a given market. A federal judge issued a stay in the case last September, and it went to court in February.

In this age of strip-mall programming, Tridish is doing his best to restore the bond between the words “community” and “radio.” He got started on this course in the late 1990s as a member of the Radio Mutiny Collective in Philadelphia, which ran a pirate FM station aimed at giving leftist political views a voice on the media spectrum. “It wasn’t just the young, out-of-work actor who wanted to read the entire Epic of Gilgamesh on the air, or the guy with the incredible collection of polka records,” he says. “People came out of the woodwork for this station.”

That experience gave him two things: his nom de guerre, which he pronounces “petri dish” (he was born Dylan Wrynn); and a lasting appreciation for the connections that local broadcasting can build. “A town without a community radio station is like a town without a public library or public schools or public parks, where people from all walks of life can come together,” he says.

In 2000, after the collective had been raided several times by the FCC, Tridish set off in a more legal direction. The FCC had just reversed course, announcing its intention to license community stations with enough power to reach between 3 and 15 miles. “When people in power say they want to make changes, there’s a moment when you have to drop your skepticism and go into the mode of trying to hold them to their word,” Tridish says of his decision to found Prometheus. Though Congress quickly slashed the number of licenses that could be issued in cities like Philadelphia, it left small-town groups alone. The FCC has since licensed 900 new low-power stations.

Add an eye patch to his stocky build and roisterous beard and Tridish could pretty much personify “pirate” radio. In person, though, he’s calm and deliberate, with an offhand gift for making the abstruse technicalities of broadcasting—everything from FCC filings to antenna configurations—seem comprehensible. But you don’t have to dig far before you hit a roguish streak. Just after he formed Prometheus in 2000, Tridish organized a takeover of the plaza in front of the National Association of Broadcasters’ headquarters, ran down the NAB’s flag, and hoisted a Jolly Roger in its place.

Still, Tridish no longer considers himself a radio pirate. “A lot of pirates are into the idea of a right to broadcast,” he says. “I believe there’s a right to reasonable and fair access to the media.” And though low-power FM for rural areas is a start, it’s only that. “A small community group like ours can own zero stations in Philadelphia,” he says, “while Clear Channel can own eight—and feel that it’s an abridgment of their free speech that they can’t own more.”