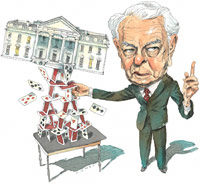 We thought we knew Senator Robert Byrd: the Prince
of Pork, the senator from Big Coal. But in the days since 9/11, the octogenarian statesman from West Virginia has seemingly been transformed. After nearly 50 years in the Senate, and with nothing
to lose, Byrd now rails against the mendacity and the militarism of the Bush administration, raising a bold if lonely voice in defense of our civil liberties and our national character.

“Shrouded in ambiguity and cloaked in deep secrecy, this administration continues to…drop its decisions upon the public and Congress, and expect obedient approval, without question, without debate, without opposition.”

“I have often felt, in recent days, as if this 84-year-old man is the only thing standing between a White House hungry for power and the safeguards in the Constitution. That is not bragging—that is lamenting.”

“The people are being offered a bureaucratic behemoth [the Department of Homeland Security], complete with fancy, top-heavy directorates, officious new titles, and
noble-sounding missions
instead of real tools to help protect them from death and destruction. How utterly irresponsible. How callous. How cavalier.… Politics in Washington has reached
the apogee of utter cynicism and the perigee of candor.”

“This is no small conflagration we contemplate. This is no simple attempt to defang a villain. No. This coming battle, if it materializes, represents a turning point in U.S.
foreign policy and possibly a turning point in the recent history of the world.… The doctrine of pre-emption…is a radical new twist on the traditional idea of self-defense. It appears to be in contravention of international law and the U.N. Charter. And it is being tested at a time of worldwide terrorism, making many countries around the globe wonder if they will soon be on our—or some other nation’s—hit list….

“To engage in war is always to pick a wild card. And war must always be a last resort, not a first choice. I truly must question the judgment of any president who can say that
a massive unprovoked military attack on a nation which is over 50 percent children is ‘in the highest moral traditions of our country.'”

“We cannot treat the citizens of this nation as if they are children who must be fed a fairy tale about fighting a glorious war of ‘liberation’ which will be cheap, short, and bloodless.”

“Today I weep for my country…. No more is the image of America one of strong, yet benevolent, peacekeeper.… We flaunt our superpower status with arrogance.
We treat U.N. Security Council members like ingrates who offend our princely dignity by lifting their heads from the carpet…. This administration has directed all of the anger, fear, and grief which emerged from the ashes of the twin towers and the twisted metal of the Pentagon towards a tangible villain, one we can see and hate and attack. And villain he is. But, he is the wrong villain. And this is the wrong war.”

“This is not some made-for-TV backdrop for a campaign commercial. This is real life, and real lives have been lost. To me, it is an affront to the Americans killed or injured in Iraq for the president to exploit the trappings of war for the
momentary spectacle of a speech. I do not begrudge his salute to America’s warriors aboard the carrier Lincoln, for they have performed bravely and skillfully…but I do question the motives of
a desk-bound president who assumes the garb of a warrior for the purposes of a speech.”

“What amazes me is that the president himself is not clamoring for an investigation. It is his integrity that is on the line.… And yet he has raised no questions…expressed
no anger at the possibility that he might have been misled.”

“The president has now stated that the war in Iraq is the central front on the war against terrorism. But it was our invasion of Iraq which has turned that nation into a staging ground for daily terrorist attacks against our occupation forces. If we are serious about protecting our country from terrorism, shouldn’t the central front be the war on Al Qaeda? But at the White House…the president waves the bloody shirt of 9/11 and then subtly shifts the conversation to Iraq.”