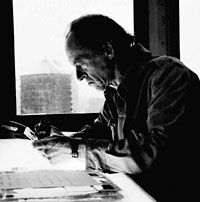 Last year, my close friend Nina Berman told me she was photographing some of the casualties returning from Iraq. They were very difficult to get, and a lot of hard work, but she did a great story. During this period, I was reading the paper and I was just in a complete outrage about the whole war and the administration. Saddam is obviously an evil man — but this was not about that. A democracy that prides itself and holds itself up as the paragon of truth was doing something incredibly deceitful — leading our sons and daughters into a war based on lies.

Nina’s photos made me realize that there was another story that was missing. Most of the press has capitulated to Bush and weren’t accurately reporting what was going on. I thought it was an outrage. I wanted to do something. I couldn’t go to Iraq; I’m too old. So I thought I would photograph these funerals. The Bush administration has never honored the fallen publicly. The families weren’t being publicly addressed and mourned for. It assuaged some of my horrific anger and contempt to start this project.

The first funeral I went to was for Tyanna Avery-Felder. I went to the funeral home the day before the funeral, walked in and introduced myself to the people there. There were all these soldiers standing around—big guys. They asked me who I was, and I told them. They asked me why I was there. I told them, “I’m a photographer. I take pictures.” They said, “You can’t stay in the funeral home.” So I asked, “Are you saying that? Or is it the request of the family?” They said it was the family’s request. So I asked if I could talk to the family. “No.” And one of them ushered me out. As he did, he told a couple of soldiers to make sure “this guy gets out of here.” I went to 17 funerals and I got the same treatment from the military at every single one of them. They weren’t just picking on me. They did this to all the press, television, the local people, everybody. They would let the writers into the back of the church, but no photographers. They were always on guard. It would break down, eventually, and then I would sneak in and get pictures. None of the people attending the funerals ever told me to go away. There was no opposition from them. No anger, angry glances or any kind of rejection when I was able to somehow work my way near the funeral. No one ever asked what I was doing there except the military. Never. There was a great deal of respect shown for the families and for the soldiers.

I talked to some cousins and friends and many shared with me their anger at feeling that the government was totally ignoring them. They weren’t just angry; they were humiliated and insulted. They were disgusted. Every community I went to, every funeral, a lot of people showed up. I saw people around me who weren’t from the family, just people from the community who were there. It was a great loss for them and it was very evident from their faces.

I wish I could have taken more pictures. I wish I could show the true extent of the pain with everybody instead of just a few. It’s a terrible loss and the communities aren’t saying, “What a glorious death, what a wonderful thing to give your life for your country.” I remember when the Avery-Felder family was approached by the officers carrying the folded flags from off the casket and presented with these flags. I saw this incredibly emotional moment in which you could see their faces changing. They were backing away from the flags. They were recoiling from these flags. Here, here’s this rag in place of your wife. Aren’t you proud? And you can see the awful loss and the contempt they have for this exchange. It was the same with the woman in the brown coat at the funeral of Scott Rose. She was out in the front of the church, and when she is presented the flag, the look of hatred and anger in her eyes is absolutely remarkable. It was so apparent, vivid, and powerful. It was another kind of pain besides the loss and suffering and everything that goes along with losing a family member. It was just so out of place—this shallow military memorial and observation of the glory you gain from dying for your country—considering the circumstances of the war. These young men and women were killed through lying.

It was an unbelievable thing to observe — the suffering of these innocent people who took no part in the decision to go to war — who weren’t allowed to take part in the decision, but were dying for this decision. Such a stupid, wanton waste of life. How can the Bush administration do this? How can they allow this to happen to our kids? I hope that anyone who sees these pictures will get a bit of an understanding of the monstrosity of this situation, of the gravity. The continuing loss of people through this war is a terrible waste.