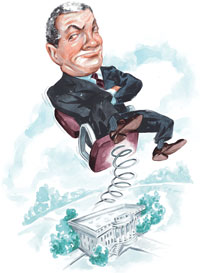 Clark Kent Ervin was stirring up trouble right until the end. Late last year—just weeks before he was unceremoniously dismissed from his job as the chief internal watchdog for the Department of Homeland Security (DHS)—he reported that the federal government still could not keep foreigners from using stolen passports to enter the country. In the weeks and months before that, he’d released reports that found the federal air marshal program in disarray, warned that shipping containers were entering U.S. ports every day without even superficial screening for nuclear material, and chastised the department for failing to fulfill its congressional mandate to come up with a centralized watch list of suspected terrorists. Even Homeland Security’s single most publicized initiative, the screening of passengers and bags at the nation’s airports, had failed to make it any more difficult to sneak guns, knives, and explosives onto planes, Ervin’s investigators in the Office of Inspector General had found.

None of those disclosures, however, seemed to be of much interest to department leaders. Secretary Tom Ridge, Ervin notes, met with him only twice, both times to complain about negative publicity generated by his reports.

Never once, he says, did Ridge so much as request a face-to-face briefing on the continued problems in airport security. It was only after Congress put pressure on the department that Ervin was asked to present his findings to Admiral James Loy, then head of the Transportation Security Administration (TSA). “His response was to say, ‘Why are you calling it a failure rate at this airport? Why not say success rate?’” Ervin remembers.

At 45, Ervin is a tidy man with deep-set eyes, tortoiseshell glasses, and graying hair. When he spoke to Mother Jones, a few weeks after his dismissal, he had traded the suit-and-tie uniform of a senior federal official for a cable-knit sweater and slacks. His political allegiances, however, had not changed. “I am a Republican who is supportive of this president,” he said. “Please write that down.”

But loyalty didn’t prevent Ervin from doing his job. “He was really the citizens’ last chance of ensuring that vitally important money was being spent well,” says Danielle Brian, the executive director of the Project on Government Oversight, a watchdog group that has been critical of the department. “Often it wasn’t.”

Ervin was born to a Democratic family in Houston, the child of a union bricklayer. It was his older brother, he says, who chose to name him after Superman’s alter ego. On the recommendation of his teachers, he was offered a scholarship as the first black male student at Kinkaid, an elite Houston prep school. He had always been interested in politics—“When I was two years old in 1961, I remember Kennedy’s news conferences”—but it wasn’t until he became a Rhodes scholar at Oxford, and then a student at Harvard Law School, that he began to question the Democratic Party for, in his view, going soft on defense and embracing a radical social agenda.

His new political views attracted him to the administration of George H.W. Bush, where he worked on the “Thousand Points of Light” volunteer initiative and soon afterward became friendly with George W. Bush, a fellow Kinkaid alum. He made failed bids for Congress and then the Texas Legislature during the early 1990s before joining the administration of then Texas Governor Bush. In 2001, he returned to Washington as inspector general at the State Department, moving to Homeland Security in 2003. He served nearly two years in the job—in an acting
capacity, because the Senate had failed to vote on his confirmation.

At Homeland Security, Ervin’s team of 459 auditors and investigators uncovered not just security lapses, but extensive waste. By the time Ervin arrived, the Department of Transportation had already uncovered one massive cost overrun: A $100 million contract granted to hire new airline screeners had ballooned to more than $600 million. Ervin’s subsequent reports revealed that Boeing Company had received at least $49 million in extra profits for a contract to do nothing more than oversee other contracts. And executives at the cash-strapped TSA awarded themselves $1.5 million in year-end bonuses in 2003, and then spent another $462,000 on an awards ceremony for departmental brass, including nearly $2,000 for seven sheet cakes and $1,500 for three cheese displays.

Yet over and over again, department leaders ignored Ervin’s calls for action. “Basically, the focus there at the top was, let’s put out press releases touting advances and let’s minimize problems,” says Ervin, “because we want DHS to be a good news story.”

Perhaps it’s that focus on positive spin that has kept officials from explaining Ervin’s dismissal. Either Congress or the White House could have acted to keep him in office when his term as acting inspector general expired in December. But neither did.

“The decision not to renominate Clark Kent Ervin was purely a White House decision,” says Elissa Davidson, a spokeswoman for Senator Susan Collins (R-Maine), though Collins herself held up Ervin’s confirmation for two years because of a dispute over an investigation he’d conducted at the State Department. White House spokesman Scott McClellan declined to comment, saying simply, “We appreciate the job he has done.”

For his part, Ervin says he’s not bitter. “I don’t have an ax to grind,” he insists, adding that he plans to continue drawing attention to the department’s problems—most of which, he says, could be fixed with the right management. “I don’t take any joy in saying what I am saying—but you have to tell the truth when you are in a job like this.”