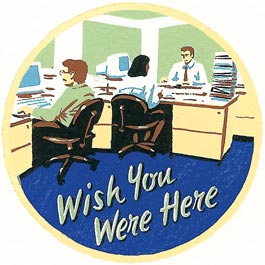 Editor’s note: Back in 2005, MoJo examined Americans’ vacation habits (or lack thereof). Below, some timeless findings on W.’s days off pre-9/11, “presenteeism” problems, and how much sex vacationers really have.

43% return feeling overwhelmed by the work they have to do.

30% of employees do office work during vacation.

25% of Americans cited “not enough time” as a major barrier to travel.

17% said it would interrupt their careers.

In March, when France ended the mandatory 35-hour workweek and allowed employers to offer overtime, 1 million people went on strike.

Only 79% of Americans get paid vacation time. Of those who get it, 12% take less than 3 days each year.

Maximum hours a week most Europeans are allowed to work, according to new EU regulations: 48

Middle-aged men who skip vacation for five years increase their risk of heart attack by 30%.

66% of U.S. workers “often” or “always” come to work when sick. Lost productivity from such “presenteeism” is thought to represent as much as 60% of company health care costs.

Percentage of time Bush spent on vacation before 9/11: 42

Ratio of time Bush took to return from vacationing on his ranch to “save” Terri Schiavo to the time he took to make a statement from Crawford after the Asian tsunami struck: 1 to 12

The RAND Corporation, a California think tank, gives employees a 5% bonus if they use all of their vacation days.

The Roman calendar set aside 109 holidays on which official business was banned.

In 1648, idleness was declared a crime in Massachusetts.

3% of people have such a hard time leaving work that they develop flulike “leisure sickness” symptoms during weekends and holidays.

In 1938, the Nazis began sending “work-shy elements” to Buchenwald. Idlers were marked with a black triangle.

Percentage of people who have passports among Americans, the British, and gay Americans, respectively: 20, 74, 84

41% of Americans have changed their summer vacation plans due to high gas prices.

4 in 5 Americans say they’d like the freedom of traveling alone, but 1 in 2 say it is regarded as “odd.”

2 in 5 Americans “feel strongly” that one of the hardest aspects of solo travel would be dining alone.

Only 1/3 of Americans report having better and more frequent sex on vacation.

Attendance at the Fellowship of Christian Cheerleaders summer camp has tripled to 15,000 since 1998.

For 2,000 pounds, Chubb will insure Brits against the “physical and mental effects” of an air-rage incident.

According to Chubb, air-ragers fall into 2 main categories: drunk vacationers and stressed businessmen “who acquire an inflated sense of self-importance” from cabin service.

According to The Economist, the value of unredeemed frequent-flyer miles is $700 billion, exceeding the value of U.S. dollars in circulation.