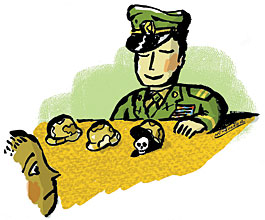 Think about ya life, the choices you make. Recruiters out to get you, don’t make a mistake./Is obvious, right, they target the ‘hood. Take a homeboy and write, what’s wrong and what’s good./My words are truth, heal like medicine. Don’t believe me? Man, holla at a veteran.

Rayniel, a New York City teenager, rapper, serious Catholic, had been talking to veterans for years by the time he became a senior at West Side High School, an alternative public school where the lived history of men in war has become a regular part of the conversation and curriculum. Rayniel himself never considered the military a career option, but as recruiting and counter-recruiting became all the word around inner-city high schools late last spring, he picked up a flyer from the American Friends Service Committee (a.k.a. Quakers) and added his own riff on its “Ten Points to Consider Before You Sign a Military Enlistment Agreement.” Points one through three advise young people to “not make a quick decision,” to “take a witness when speaking with a recruiter,” and to “talk with veterans.” Or, in Rayniel’s translation, “Think about ya life….”

Jim Murphy wasn’t thinking about much as a high school student near Rochester, New York, in the early 1960s. A kid with all the others sitting in the back row—the ones without a plan, sullen and indifferent, on whom their teachers had by then given up—he was, he says now, “really dead in the water. College, I blew it off. I was so far in the back row I had my hand up for the bathroom, the easiest fresh meat right there.” He signed up for Vietnam and has been thinking about it ever since, the leeches and rashes and flamable boredom, the obsidian memory of death and horror purchased with lies.

Murphy is an administrator at West Side High today, and just before graduation Rayniel made him a gift of the customized “Ten Points” to give to students when he talks to them about war this fall. The two, Rayniel and Murphy, represent the U.S. military’s deepest desire and greatest fear—youth and experience, except the one is not so young as to be unacquainted with cynicism nor the other so experienced as to have drowned in it. Recruiters know not to waste time with the Rayniels, and because they won’t roam schools without a welcoming administration, they stay away from West Side High. But Murphy and a team of veterans will go where the recruiters go, making the rounds of New York’s front-line high schools as they did last year, presenting themselves as primary sources in a district where Tim O’Brien’s testament to war and narrative remembering, The Things They Carried, is on the official reading list for senior year. They’ll address themselves most to those kids in the back row, the recruiters’ softest targets, answering again the simple, searing question about Vietnam that they always get: “How did it change you?”

The Pentagon’s recruitment crisis is only the latest evidence that the authors of Operation Iraqi Freedom forgot something on the way to war: the adamant memory of Vietnam, and not in the usual sense. There’s a truism among military strategists that “the war before” colors the one you’re fighting. World War II corporatized the military, in everything from management style to procurement to the seemingly permanent draft, even as it helped make the middle class and valorized combat experience as the ultimate manly credential. The Vietnam War was born of all that and then convulsed on it, transforming the draft into political dynamite and restructuring the Army to make wars like the one in Iraq unthinkable, or so almost everyone on up to Colin Powell once thought. Now retired Army officers will say openly that there’s no precedent for running a full-scale war with a volunteer army; they will cite the Powell Doctrine—prescribing war only on condition of mass public support, swift and overwhelming force, and a clear exit strategy—as the lost lesson of the war before, the thing that Bush and Cheney, with no experience of Vietnam, were mindless of, and that Powell, whether too weak, too ambitious, or too loyal, failed to impress upon them.

Such critiques miss the fundamental lesson, which is that soldiers forced to become criminals for old men’s ambitions won’t all come home quietly. After Jim Murphy returned from Vietnam in 1969 he became part of the most rocking, because least expected, movement against the Vietnam War, the GI rebellion. He doesn’t describe this in his presentation to high schoolers—in 40 minutes it’s all that he and his fellow vets can do to convey the reality of war, the nature of military commitment beyond a recruiter’s promises, and alternative sources of scholarships, jobs, or adventure—but it forms the essential context.

By Christmas 1971, when Murphy was among a band of Vietnam Veterans Against the War who seized the Statue of Liberty for three days, many thousands of GIs had participated in antiwar protests in American cities and at many major U.S. military bases in the world, including Saigon. They produced more than 100 underground GI newspapers, listened to underground GI radio, put their heads together at dozens of GI coffeehouses established by soldiers and activists in U.S. military towns, and formed a subset of the counterculture that took a playful whack at the Army’s early-’60s recruiting promise of “fun, travel, adventure,” FTA, appropriating the acronym for an unvarnished answer back: “Fuck the Army.” By the hundreds they were jailed, by the thousands exiled. Their coffeehouses were attacked by the Klan in Texas, firebombed in Idaho and South Carolina, harassed by police and local officials everywhere. Riots burst out in nearly every U.S. military prison in the world, and in the field officers were being fragged. In 1971 the Pentagon totalled up 503,926 “incidents of desertion” since 1966, and concluded that more than half of U.S. ground forces in Vietnam openly opposed the war. Mutiny then spread to sailors and airmen.

Those veterans are someone’s father or uncle or teacher or coach today, someone’s grandfather or neighbor or coworker or family friend. They are among those whom military recruiters call “influencers.” That the Pentagon has been caught off guard by the elders discouraging youths from enlisting indicates not only how captured it is by its own propaganda (the war as a heavily armed school-building, sewer-digging, democracy-spreading program) but also how completely it has been gulled by the revisionist machinery that for decades has manufactured a story of Vietnam veterans and antiwar protesters as two camps, distinct and hostile.

A spanner is about to be thrown into that revisionist machinery. Sir! No Sir!, a shattering documentary by David Zeiger expected to be in theaters by year’s end, provides many of the statistics of Vietnam-era GI resistance cited above. More, it discloses the soul of soldiers, in story after story, who thought about their life, about everything they’d believed about fair play and honor and being a man and saw it negated, cynically; who realized, as former Air Force linguist Tom Bernard says in the film, that “the lies were so stark it challenged your own dignity, it challenged your own loyalty, it challenged your own humanity.”

Iraq veterans are coming home with some of the same conclusions and nightmares. Few talk about this publicly, but a caution to a young brother or sister, an unaccustomed silence or strange anger, and word travels. Murphy says that 50 to 70 percent of the kids he addresses say they know someone who’s in the military, in Iraq, or just returned. A Jamaican kid named Conrad (“just Conrad”) tells me about a student he met whose father is a recruiter. Recruiters don’t necessarily choose the job; they’re assigned because they’re good talkers, good looking, and this father “comes home so angry and stressed out all the time because he’s lying to these kids.” Whatever their dream, he’s got to pitch the Army as the highway to it. And then Conrad remembers something a returned soldier told him. There was this Iraqi whom everyone in the platoon knew, and knew his name, but “they call him hadji, and everyone in Iraq is hadji.” In Vietnam, “they called them gooks,” Conrad says, recalling what his history teacher, a vet, had told him. “And I was like—wow—that’s a racist name, there’s no moral attachment so you can just kill them,” which is what that teacher has been carrying for 30-some years. When I met Conrad, he was with a citywide group called the YA-YA Network (for Youth Activists, Youth Allies), which runs counter-recruitment workshops for teenagers and won the legal right to leaflet outside schools. YA-YA doesn’t lecture about hegemony; it explains the job of the soldier at this time and place. “That’s where it starts,” says Dave Cline, reviewing his own trajectory from grunt in Vietnam to war protester to president of Veterans for Peace.

And so the Pentagon’s crisis spreads—without streets abuzz or ablaze, without galvanizing sit-ins, sit-downs, occupations, or other such events that have come too narrowly to define protest politics. Desperate for blood, bodies, boots on the ground, the Army is soliciting dropouts, the out-of-shape, and the underachieving. Beginning September 24, the antiwar coalition United for Peace and Justice will put on three days of disruption in Washington, D.C., the first such mass action in more than a year. Over that long silence, the generation that has been targeted by the police, targeted by the military, left stranded by the economy, abandoned by politicians has begun to learn what it took Jim Murphy four years in Vietnam to learn: how to say no. This fall Rayniel will be in college. Murphy hopes more Iraq veterans and military families will join the school tours. On the flyer he carries, the one hip-hopified by his former student, the Quakers’ final three points—that any enlistment promise can be broken by the military and any job switched arbitrarily, that all individual liberties can be restricted, that there are alternatives to enlistment—contain a new day’s change on FTA:

Now do you wanna R.I.P., Rayniel from N.Y.C. telling you there’s no guarantee… J.O.B./ You have no clue. This is for the ones who keep it real in the military, you can’t be you./So think, listen and see. Is a puppet to America really “all you can be”?