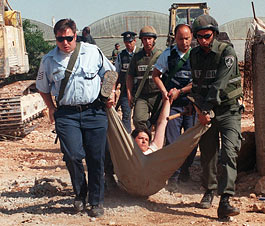 IMAGINE IF SUNNI INSURGENTS decided to face down the greatest power on earth with a human chain of non-violent resistance. Or if Hamas threw human shields rather than human bombs at Israel.

This is the kind of movement that the four members of the Christian Peacemaker Teams currently held hostage in Iraq are trying to build, and it’s precisely the model that the peace movement should have, but didn’t, take as its strategy for challenging the Bush Administration and its imperial ambitions after the invasion. Instead, less than a dozen CPTers have stood virtually alone against 150,000 “coalition forces” and an equally violent and unscrupulous insurgency—a scandal whose reflection on the movement is every bit as devastating as Abu Ghraib and Guantanamo are for the US army.

It didn’t have to be this way. The peace movement did not have to settle for the kind of “cheap activism” (as one of the hostages described his activities before coming to Iraq) that has come to see periodic protests in New York or Washington DC as a legitimate substitute for the hard work of facing off against the violence of empire and occupation on the ground. There was a moment after the invasion, before the insurgency took root, when the peace movement could have made a difference in Iraq. Instead of writing off Iraq as lost to Cheney and Rumsfeld, expending energy in tirades against American empire—when is the last time an anti-imperialist movement ever succeeded in the West?—or worse, actively supporting violent insurgency at the very moment other peace activists have been held hostage (as have some of the most senior members of the movement), the movement could have marshaled its resources and helped Iraqis build a non-violent movement of resistance against both occupation and the violence and hatred it breeds.

This is why, I believe, CPT went to Iraq, and why it’s work as been so important in other countries, from Colombia to the Occupied Territories. As I’ve seen many times in Palestine, with a few dedicated people CPT has brought powerful results in the communities in which they work. To begin with, they serve as first person “witnesses” to the violence of the occupation and war. This is absolutely crucial, because one of the key dynamics that allow both to continue unhindered is the ability of governments, guerrillas, and occupiers to hide the truth from the world.

Second, they act as a barrier between the occupied and the occupier. The death of International Solidarity Movement activist Rachel Corrie (killed by an Israeli bulldozer in 2003) is perhaps the most dramatic example of the dangers faced by activists; but it is in the less dramatic but equally dangerous daily encounters between civilians and soldiers that I’ve seen CPT prove its worth. It’s hard to count how many times I’ve seen CPT members get in between Israeli soldiers and Palestinian civilians—often too young, old, or infirm to protect themselves—and stop an act of violence that would have scarred both perpetrator and victim for the rest of their lives. Indeed, it is precisely because CPT acts on the recognition of, and desire to, preserve the humanity of both the occupier and occupied that it has been able to work small miracles in the Occupied Territories, and why it has made many friends in Iraq despite its small presence.

As one of the founders of the Muslim Peacemaker Team in Iraq explained, “They brought Shias, Muslims and Sunnis together. They help us. We were inspired by their action to travel all these thousands of miles across the ocean to come here in Iraq and speak about peace, [and] promote nonviolence. And they are so steady and consistent in visiting the same place they did visit many times just to lay down their sense of community and friendship.” CPT has also inspired Israeli and foreign peace activists, such as the Israeli Committee Against Home Demolitions and the International Solidarity Movement, in their work.

But sadly, CPT has too rarely been joined by other activists willing to make the same commitment. This isn’t for lack of an understanding of the importance of such an enterprise. As a senior member of United For Peace and Justice remarked to me in the aftermath of the US invasion, “Imagine if thousands of college students flooded Iraq, witnessing what was going on, helping build a non-violent movement, and came home to tell Americans the truth about the occupation.” Needless to say, UFPJ didn’t put much energy into creating such a program. Similarly, over one hundred European activists were supposed to join a “peace caravan” to Iraq on the first anniversary of the invasion. They canceled because of security concerns, months before the first activist was targeted by insurgents, when CPT and the few dozen other international activists in Iraq (like those of Ponte per Baghdad and Occupation Watch) were moving around openly, meeting with grass roots and religious leaders on good days and helping carry the wounded out of Falluja and Najaf when the US and UK laid siege to those towns.

But if peace activists were largely absent from Iraq, lots of young Republicans left their cushy internships at the American Enterprise Institute or Heritage Foundation, or consulting companies, to make their bones inside the Green Zone. And well over 190,000 young Americans have had little choice but to spend their days and nights protecting it. As for Iraqis, the leaders of the various factions opposed to the occupation would do well to take to heart the example of the CPT members now held hostage.

My last images of the Christian Peacemaker Teams in Baghdad was of their holding a vigil in Tahrir Square to protest against the detention and mistreatment of Iraqis by the US military in Abu Ghraib. This was in late March 2004, months before anyone in the United States had even heard of Abu Ghraib, or bothered to consider how our armed forces were treating detainees in the war on terror. But CPT knew full well what was going on in Abu Ghraib—that’s why they were in Iraq: to “witness” the realities of the occupation—and they were determined to make sure that the Iraqis saw that there were Americans, and Westerners more broadly, who were willing to put their bodies on the line to protest against such abuses. It’s too bad that it’s taken this tragedy to get the rest of us to listen.