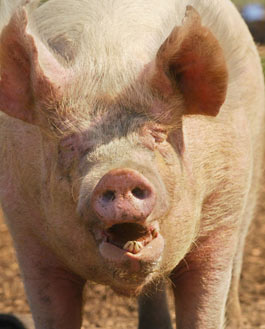 Article created by the Center for Defense Information.

The Congressional Research Service has produced a new report on “earmarks” in appropriations bills. Otherwise known as “pork,” defense appropriations earmarks continue to climb in both number and cost. Congress’ self-appointed “pork busters” and other reformers have now moved beyond talking at and studying the problem; now they are offering cosmetic non-solutions.

A further review of the CRS studies shows an interesting pattern: while the absolute numbers and cost of defense earmarks have been growing, the cost of earmarks as a percent of the total cost of DOD appropriation bills has been stable at almost exactly 2.3 percent since the year 2000. While the CRS study does not address this characteristic beyond simply citing the percentages, it is worth noting that no other appropriations bill for any other agency shows a similar stability; in fact, many show very different percentages from year to year. That the DOD appropriations legislation has been stuck at this 2.3 percent suggests a conscious, not a random, pattern. Could it be that the House and Senate Appropriations Committees have settled on a fixed percentage for their pork? Having spent 31 years working on Capitol Hill, this author can certify that such a tacit game plan — a quota for pork — is well within the mental capabilities and ethical boundaries of the Appropriations Committees.

Because the total defense budget has been growing during the period of this stable percentage, the cost – and number — of defense pork items is permitted to grow each year. That would keep the herd of congressional supplicants to the Appropriations Committees and the “leadership” of those committees all happy and satisfied.

That there is any such quota is merely this author’s, not CRS’, hypothesis. Surely, the House and Senate Appropriations Committees will deny it, but any such denial merely begs the question: what criteria do they use to decide how much pork is enough? The pattern is too consistent to readily accept that they just happened to end up where they end up.

The CRS reports implicitly raise some other questions. McCain forgot to ask CRS to study earmarks in authorization bills. He restricted his research request to just appropriations bills, thereby obviating any revelations about the persistent porking in the National Defense Authorization bill, annually reported out of the House and Senate Armed Services Committees. Indeed, exposing the number of earmarks in bills from the Senate Armed Services Committee, where McCain sits as a senior member, would be problematic for the new tack he has taken on “busting” pork.

In the flurry of activity to reform earmarking and lobbying in the aftermath of the Duke Cunningham scandal, McCain and others have introduced “The Pork Barrel Reduction Act.” It would define “pork” as earmarks in appropriations bills that are not “authorized.” By that, he means projects not approved by the relevant Senate “authorization” committee for defense matters, namely, McCain’s own Senate Armed Services Committee. Put simply, according to McCain, it’s “pork” if the Appropriations Committee added it, but not if the Armed Services Committee added it.

There would be some legitimacy to McCain’s distinction if the review process for earmarks in the Senate Armed Services Committee were somehow different from, and superior to, that in the Senate Appropriations Committee. That, however, is not the case. In both committees, the process consists of the committee staff soliciting the view of bureaucrats in the Pentagon. If the latter want, or at least can tolerate, the additional spending, the committee will almost certainly accept the earmark and some spending for it; if the DOD bureaucrat does not want the “add-on,” it will almost certainly be rejected by either committee. Put simply, the process employed by the Armed Services Committee for assessing pork is virtually indistinguishable from that of the Appropriations Committee; McCain attempts to draw a difference where there is none.

The only possible difference in the review of pork is the political tests the chairmen and ranking Democrats on the two separate committees apply. As their staff has repeatedly explained to other Senate staff, Sens. Ted Stevens, R- Alaska, and Daniel Inouye, D- Hawaii, at the Defense Appropriations Subcommittee tend to limit pork for senators who vote against their bills. In their joint review of pork at the Armed Services Committee, Sens. John Warner, R-Va., and Carl Levin, D-Mich., tend to be less crude politically and to rely solely on the judgment, or at worst forbearance, of DOD bureaucrats without an intervening filter of a political smell test.

In neither committee is there a truly objective review, such as by the Congressional Budget Office, for the actual cost, or by the Government Accountability Office for actual need or effectiveness. Moreover, in neither committee is any requirement imposed that the business contracting for earmarks be competed between the firm intended by the member to get the contact and others, perhaps in a different state. Doing so would likely reduce cost and improve quality but would defeat the point of the whole operation: to bring home, not to others, the bacon.

However, even the counterfeit reforms of McCain’s “Pork Barrel Reduction Act” are too strong for other senators. The “Legislative Transparency and Accountability Act of 2006” has been jointly offered to the Senate by Sens. Trent Lott, R-Miss., and Susan Collins, R-Maine, ( the chairs of the Senate Rules and Homeland Security & Government Affairs Committees, respectively). That bill, which also addresses the related issue of lobbying ethics, states that earmarks must now be explained as to their “essential government purpose” and who in Congress proposed them. But in requiring this useful and welcome public information, the bill would define earmarks in a most unusual manner. According to Lott and Collins, it’s only an “earmark” if it’s for a “non-federal entity.” That meaning is not particularly clear, but, based on discussions with Senate staff from the two committees that wrote the bill, it would appear that an item like an additional VIP aircraft, known as a C-37 transport, for generals and members of Congress to travel in would be directly appropriated to a very “federal entity,” namely the U.S. Air Force, and the producer Gulfstream would only be the secondary, not definitive, recipient. In other words, this and most of the thousands of other earmarks to the Defense Department or its component parts would appear in this legislation not to be an earmark, as defined by the bill and, therefore, not subject to the disclosure the bill requires.

That gigantic loophole was apparently insufficient for the authors of the Lott/Collins bill; they further defined an earmark as only a provision that appears in the text of bills, and ultimately laws. In other words, the thousands of earmarks that committees like Armed Services and Appropriations add to committee reports and “joint explanatory statements” that accompany bills in their final form would also not be “earmarks.” Only a tiny fraction of the 2,847earmarks CRS found in the 2006 defense appropriations bill, certainly fewer than 50, appear in the text of the bill, not accompanying reports. Only that tiny fraction would be covered by the Lott/Collins proposal, and of those only the ones intended for a “non-federal entity.”

People familiar with the Lott/Collins and McCain bills predict that there will be an attempt, probably by McCain, to close the loopholes in the Lott/Collins bill by requiring that any earmark to actually receive federal spending must appear in bill text, and to cover federal, as well as non-federal, earmarks. In short, these “toughening” amendments would merely change how pork is displayed and would not require that it be objectively evaluated or contracted with any due diligence whatsoever. There is no plan to put real teeth in the McCain definition of “pork.” If these planned amendments are successful, the ultimate result would be to let pork continue to grow; it would first be endorsed by the Armed Services Committee and it would then be listed in the text of appropriations bills, not just reports. Perhaps they should rename the bill; “The Putting of Lipstick on the Pig Act of 2006” would be appropriate.

Perhaps, happily, none of this is likely to pass. Ostensibly because it was being burdened with an amendment on the “Dubai ports” issue, the Lott/Collins/McCain legislation was pulled from being the pending business of the Senate, and the body moved on to debating other legislation. It is entirely possible that senators did not want to endure even the cosmetic earmarking requirements to be imposed and/or the other lobbying reforms (such as they may be) in the bill. It is unclear if the bill will return to become Senate business, but if it does, the game plan is quite clearly to keep the Senate pork machine well greased.