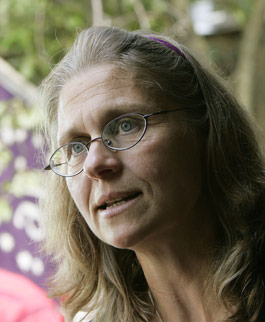 A second slice of peppermint ice cream pie sits softening on one arm of the candidate’s puffy, oversize chair. Coleen Rowley, erstwhile FBI whistleblower, 2002 Time Person of the Year, grandmother, and Iraq war critic, also happens to be a dedicated triathlon competitor and, possibly as a consequence, possessed of the kind of appetite boomers of a certain socioeconomic stature rarely display in public these days. She’ll get to the pie, a maraschino-tint-ed slab encased in a candy crust, but for now she’s too worked up about the economics of being a Democratic candidate for the U.S. House of Representatives from Minnesota in 2006.

Rowley, 51, is slender and muscular, animated and direct. She has clear blue eyes, shoulder-length hair, and favors multicolored sweaters, plaid skirts, and cloth hair bands. What she lacks in polish she makes up for in guilelessness. She has rejected suggestions from the political establishment that she snazz herself up or exploit previous fame. In her view, voters in Minnesota’s 2nd District will either elect her to the House for who she is or else she’ll find something different to do.

Seen in a certain light, this position is one of righteous inflexibility, the very trait that made her a whistleblower in the first place: To expose, shortly after 9/11, the FBI’s failure to notice signs of the terrorists’ plot, took a courage bordering on belligerence. In another light, though, her unassuming style reflects precisely the authenticity many voters are starving for.

Rowley is most energized and compelling when she’s talking about national security. Butissues, as she’s come to understand by this point in the electoral calendar, are something a candidate gets to after she’s taken care of first things first, namely money. In 1990, the late senator Paul Wellstone ran a successful low-budget campaign from the same part of Minnesota. But lobbyists, strategists, and other political insiders have griped to newspapers and political journals that Rowley doesn’t have enough money to be taken seriously.

“Right from the start you hear, ‘money, money, money,’” she says. There are just three kinds of viable Democratic candidates, she’s been told: People with a history in politics, which translates into money; “self-funded” candidates
willing to spend their own fortunes winning office; and celebrities, who, in addition to money, have bankable name recognition. The few successful challengers for House seats in 2004 all raised seven-figure war chests. In that election, Republican John Kline—the man Rowley now seeks to unseat—spent $1.6 million, besting an opponent who spent $1.2 million. Rowley calculates she’ll need $2 million and an army of volunteers. By year’s end, she had collected $170,000 for her bid to secure the Democrats’ endorsement at a party caucus on May 6; already by the end of September, Kline had raised $464,000.

At this point in her jeremiad, Rowley gestures at the Danish modern dining table in the living room of her ’70s-style split-level. On the table, a heap of envelopes and checks threatens to pitch onto the floor; stray dollar bills peek out here and there. She spent five hours on the phone the day before, asking people on a call list for money.

When Democratic recruiters first approached Rowley about running in 2004, she said no. She had not yet left the FBI and, speaking of money, couldn’t afford to until she had secured her pension and health care benefits for her family. “But the real reason, above and beyond, was this fundraising thing. I was at the bottom of my sixth-grade class in selling Girl Scout cookies. I sold 11 boxes—and 6 of them were to my grandmother.” When she retired at the end of the year, she set her sights on an appointment to the Privacy and Civil Liberties Oversight Board, a federal panel charged with ensuring that anti- terrorism efforts don’t erode civil rights. President Bush passed on her, and the next time the Democrats came knocking—insisting they were looking for candidates with unconventional backgrounds who could capture the imagination of the voting public—Rowley said yes.

The grumbling, from fellow Dems and pundits alike, started right away. The week Rowley declared her candidacy, she says she got calls from reporters at national political publications asking how much money she had raised. Newspapers quoted strategists who complained that she was “failing to accept advice” on matters ranging from her physical appearance to the hiring of a campaign manager. One political editor criticized her August visit to Cindy Sheehan’s antiwar protest in Texas as “especially risky” and said her campaign had “something of a homemade feel.”

“The Democrats were desperate to get someone to go against Kline, and they went with her for the obvious reason that she had a big name,” says David Schultz, a professor at Hamline University in St. Paul whose research specialty is media and politics. “But what they didn’t expect is that, as a whistleblower, she’s someone who’s pretty unconventional. They’re getting what they want, but they’re not liking what they’re getting.”

Pundits have also opined that Rowley should stop talking about Iraq, especially in a district Bush won in 2004 with 54 percent of the vote. But she says her campaign’s canvasses suggest the opposite: The war, along with concerns that it has made the country less secure, was by far the topic most often raised. And who better to press that issue than a career FBI agent who voted Republican until she saw bad intelligence being used to justify war?

“She may pull it off,” says Schultz. “If she can run against Bush, against the Washington establishment, and link Kline to Bush, which is easy to do, she may capture the swing vote.”

If Rowley does pull it off, it may be in spite of herself. In her insistence on purity, she is not just refusing to style her hair or apply more mascara; she’s refusing even to pose for campaign literature with the Time cover on which she and 2002’s other famed whistleblowers—Enron’s Sherron Watkins and WorldCom’s Cynthia Cooper—are celebrated. If she wins, she says, it must be because voters see and hear Coleen Rowley, not because of some editor’s decision to put her on the cover. No wonder the insiders don’t know what to do with her.