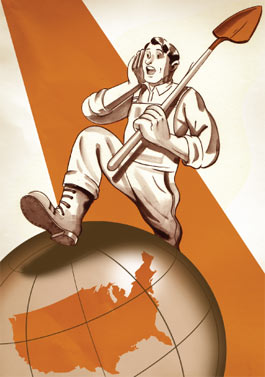 The immigration rallies that swept the country this spring were a movement of working people. But they were expressed and represented in good part by their children, many of them student-citizens who enjoy the political rights their parents, uncles, aunts, and neighbors are denied. Here in Austin on April 10, the marchers were mostly in college and high school. But the signs they carried often expressed the experiences of the parents. Their message: We came to work. We pay taxes. We appreciate what we have here. We want to be left alone.

Signs and speakers declared that many immigrants didn’t want to come to America. They were forced to, by the Latin American debt crisis, by NAFTA and the liberalization of trade in corn, which threw millions of poor Mexican farmers off their land. (Now the same will happen in Central America, with CAFTA.) It was predictable. Food goes south, people come north; the migrants are the victims, not the architects, of globalization.

These are people of the shadows. They distrust and avoid government—not just our government but all government, and in their position who would not? Despite all the talk of the burden that immigrants put on social services, it’s worth noting that, according to our own government, three-fourths of all undocumented workers pay payroll taxes, contributing, along with their employers, about $7 billion per year into Social Security and Medicare, all for benefits that they will never draw.

What brought these quiet people into the streets? It was not demands for more but the threat of less: a bill, passed in the House of Representatives, that would have criminalized them by the millions, imprisoned them by the hundreds of thousands, and deported them by the truckload. Was there ever something so mean-spirited, so gratuitous, so ungrateful?

The Republican leadership knows that immigration is a permanent fact. In a growing economy, jobs once filled usually do not disappear. And with the pay differentials that exist between the United States and Mexico, let alone China, who would go back? Migrants come here for their working lives. There are practically no “guests,” and the concept of a “temporary worker” is largely a myth. Border enforcement compounds this: As Princeton’s Douglas Massey has shown, the effect is to keep them here. If you make it hard to get across, guess what? People who manage to cross just stay; they don’t run the risk of getting caught a second time. So they bring their families if they can, or start new ones—and stay put over here.

What were the House Republicans thinking? They were thinking about votes. Immigrant criminalization is of a piece with felony disenfranchisement, voter roll purges, voting machine shortages, phony terror alerts, and Bush v. Gore: every rotten trick that keeps in power a party of old white plutocrats. (All the sweet talk about Latino “values voters” was, in the end, just talk, and for good reason: Republicans may get 30 percent of the Hispanic vote that way, but 7-to-3 is still a losing proposition.) On one side, it’s about work and dignity and human independence. On the other, it’s about who rules America—not right now, but in a decade or two when the immigrants’ children grow up.

Meanwhile in the Senate, “tough but fair” is the watchword of those who seek a “middle way.” In a proposed compromise, migrants here for more than five years would be legalized; those here two years or less would have to go home. The trouble is, there are some issues you can’t divide down the middle. Under South African apartheid, the analogous idea would have been giving legal rights to the “colored” while keeping blacks strictly segregated.

One problem is, you can’t tell who has been here for two years, who more, and who less. (When workers are undocumented, there are no documents, you see.) But even if you could, it’s a bad idea. We need the workers! If you send some away, others must come in. Who thinks a pool of short-timers is better than a growing population of aspiring citizens? Only politicos, who fear how the citizens will vote.

What is the solution? For us: solidarity. We must stand with the immigrants. Their fate is our fate. We were them; they are us. We can be one country, with one people, citizens and voters. Or we can be a police state, ruled without hindrance by people who do not work and for whom politics is the business of controlling people who do. Either our immigrants will come, in time and with a certain reasonable effort, to enjoy full political and labor rights, or those rights will disappear for all, including the right to a meaningful vote. Most Americans seem to understand this, at some level. And this accounts, I think, for the great sympathy with which the marchers were met this spring.

Could there be anything more different from the migrant marchers than that other great youth uprising of 2006: the case of France? Through the prism of our media, that one seemed like an event from another planet—a revolt of the coddled rich, of dreamy ideologues, socialists stuck in the pre-global economy, unwilling to face the world of tough love and hard work.

To an American pundit, the French kids look like his own: white, well dressed, apparently middle class. The pundit assumes that they occupy the same social space: rich and spoiled. But it’s not so. France has many more kids age 20 to 24 in college, and except for the superelite, the future isn’t bright for most of them. The French kids aren’t looking forward to decent jobs in teaching or good ones in business or the professions. Crammed in decaying universities, they are struggling for survival even now. Once out, they face unemployment over 9 percent—twice as high as their American counterparts. On average, Prime Minister Dominique de Villepin claimed, 8 to 11 years will pass before they obtain stable jobs.

De Villepin thought this factoid would help sell his plan, but the French students saw through it. The new law gave employers the right to fire, without cause, anyone under 26 during his or her first two years on the job. Would this have created new jobs? Sure, it would have generated new offers—as existing jobs changed from being stable slots for older workers to 729-day wonders for young people. Where would these offers lead? Nowhere except back to the jobless rolls. The whole thing bears a chilling likeness to a bracero program—temp work with no rights, high turnover, and no prospects.

Would French employers have so abused the system? Of course! The whole idea was to give them that chance. The kids reacted to this not as students but as workers. Their analysis wasn’t ideological, it was economic. They said, Let’s have a solution that really creates new jobs. Remarkably, they won a round—though no real solutions to France’s jobless crisis have emerged, and the battle will go on.

And so the American story and the French story begin to look a bit more alike. Both countries have working populations on the margin of struggle. In the United States, with a decent record of job creation, it’s our immigrants. In France, where the overall employment record is worse, the marginal population is larger. And it’s much closer to the social center of the country.

In both countries, we have young people as the emerging voices of workers’ rights. In both, they are opposed by old men who cling to power, enacting cynical laws. None of our present immigration plans will “solve” the “problem,” just as de Villepin’s gimmick would not have created jobs for France. In both countries, the marchers have won, from the people who know and understand them best, a large measure of solidarity, sympathy, and support.

In some ways, it’s an optimistic picture. Martin Luther King Jr. said it: The arc of history bends toward justice. And the tides of demography cannot be turned back. Once you know in which direction they flow, you know more or less where the future lies.