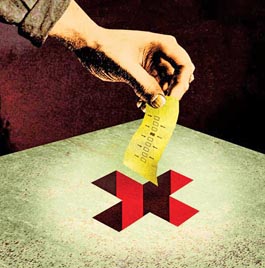 I am one of america’s 47 million uninsured, but I can’t say I am much interested in “affordable health care.” Among the abundant terms that politics devises to leach all moral sentiment from a human concern, few uncouple themselves from the force of life so thoroughly as those three words. Affordability, not social protection or right, is the accent, the language of pollsters and lobbyists. Accordingly, “affordable health care” is one of the boxes Democrats have on their list of priorities; it could mean anything or nothing. Health is something else.

Just before the election, I was driving in the coal counties of southwest Virginia with three members of the United Mine Workers of America. 2006 was a bad year for coal miners; by November, 43 had died in mine explosions or accidents, the worst toll in more than a decade. Two others, who had been responsible for monitoring conditions in the infamous Sago mine, blew their brains out. All but five of the dead were nonunion. Standards are more likely to be lax at nonunion mines. The umwa has urged the government to order safety improvements in every mine, so far without satisfaction. We were heading for a Democratic rally in Wise County, and as we drove, Ken Holbrook, a thin, soft-spoken union negotiator, pointed out the scars from bench mining on the mountainsides; the Wal-Mart, Lowe’s, and other low-wage establishments occupying sites that used to be strip mines, before that mountaintops; and the distant hollows where underground mines once operated.

In the late 1980s there were hundreds of mines in these counties and 17,000 union miners, he said; now all of Virginia has 99 mines and only 6 are union, which combined employ no more than 520 people. We were traveling on twisty roads that had been conveyors of food, supplies, men, women, and armed police vehicles during the storied Pittston strike of 1989. Labor won; then capital struck back. Like the big steel companies and auto-parts makers, Pittston and other mine operators began declaring bankruptcy, reneging on their contracts, selling their assets or reopening under new names, offering similar wages but no benefits. From the driver’s seat Mike Kennedy, the puckish blond field rep of the umwa district covering this region, noted that the mine he worked still had 20 years’ worth of coal in the ground when it closed in 1995. Retiree health and welfare had been a centerpiece of the strike; the corporate backlash threw down a choice: the old folks or your jobs. Now workers from shuttered union mines are loath to organize their new job sites because they could never win the old-style comprehensive retirement benefits, which their former employers are still legally obligated to pay them so long as they don’t work under another union contract. Union mines, meanwhile, won’t hire experienced workers who are a few years shy of being vested because that would mean inheriting retirement obligations; in that situation, “you can’t buy a job,” Kennedy said. Lifetime health benefits, which nationwide keep 60,000 umwa retirees and their families alive, have become a rope for slowly strangling the union.

So when women running the phone banks at the district office told me the voters’ chief concern was health care, what they meant was preserving those lifetime benefits, the union that went to the mat for them, and the culture of cross-generational solidarity. “You could say it’s about family,” the umwa‘s organizing director, James Gibbs, said. Like his father, the first black man to own a mine (union) in Virginia, Gibbs started out as a miner in Dickenson County. He filled in the history I had half-heard from the women. Long ago the umwa operated about a dozen hospitals. It turned them over to the federal government after World War II in return for assurances that union families would have their medical needs covered to the grave. Companies agreed by contract to pay the benefits, which were backed by government guarantee. Things haven’t worked so well in practice, and among the several reasons mine families had for opposing then-Senator George Allen’s reelection was his refusal to hold the government to its side of the bargain. At the Wise County rally, the coal region’s congressman, Rick Boucher, declared, “We are going to make sure Harry Truman’s promise is kept and mineworkers and their families will have health care today, tomorrow, and forever!” The problem then would still be everybody else.

The Virginia Department of Health’s profiles of the six overwhelmingly white coal counties show spikes as pronounced as those found in overwhelmingly black areas near Richmond. The ailments are different: staggering rates of kidney disease, diabetes, psychosis, and hiv/aids in the latter; and in the former, rates of heart disease as high as two times the state average, accidental injuries, chronic lower respiratory disease, and suicide as high as three times the average. No campaign addressed these depleting spirals of damage and risk.

Last August the National Institute for Occupational Safety and Health announced it was expanding surveillance of mines in Lee and Wise counties after 11 working miners there were diagnosed with advanced cases of black lung disease. According to Sparkle Bonds of the Virginia Black Lung Association, miners are getting sicker younger—in their late 30s or 40s rather than in their 60s or 70s—because of higher concentrations of dust and less stringent oversight. Mike Kennedy’s girlfriend, Angie Taylor, says that at shift change she can tell nonunion miners by the soot on their faces. The umwa‘s president, Cecil Roberts, can preach up a storm for the union cause, but he doesn’t see the people as a whole getting much of a break from the economics of lowered expectations without nationalized health insurance. Amid high spirits after a Democratic rally in the town of Marion, Rep. Boucher told me he thought everything would be on the table in a Democrat-controlled Congress, including such nationalization via an expansion of Medicare. But even if the Democrats want to make health care a right (and there’s been no rush to embrace John Conyers’ comprehensive insurance bill), as Roberts would dryly note later, “they can’t do anything so long as there’s this war.”

“War is the health of the state,” Randolph Bourne famously wrote in the midst of the patriotic frenzy of World War I. The corollary, that it is the disablement of society, appears to be a truth voters recognized in November and are unwilling to accept as fate. That is why in Virginia, at least, in the coalfields and cities, among readers of the black Richmond Free Press and residents of the increasingly immigrant-rich Washington suburbs, the question of war flowed easily into questions of inequality and the tattered social contract, the overall effect being less of an issue checklist than an interlocking pattern of ills and needs. In a classroom at Virginia Commonwealth University in Richmond a week before the vote, Jim Webb, whose election ultimately captured the Senate for the Democrats, had moved so fluidly from vulnerability to vulnerability—of soldiers in Iraq, of people in New Orleans, of workers uninsured and watching real wages decline, of manufacturers at a global disadvantage because other countries have national health systems while here the cost of medical benefits figures into the price of every car—that it seemed natural when a student asked him, “So are you saying you’re going to move toward socialized medicine?”

Webb said that growing up and then serving in the military (“the closest thing we have to socialism in America”) made him open to an “efficient government-administered insurance system.” He could have added that his touchstone is itself being eroded by war. The immense needs of the wounded are careening toward the wall of limited resources. Veterans Affairs treated 23 percent more wounded in the first quarter of 2006 than the Bush team had estimated for the entire year. More than a million soldiers have served in Iraq and Afghanistan, many for multiple, punishing tours, and like the old miners, they have all been promised lifetime health benefits. Already last fall, the Pentagon heard testimony that veterans’ increasing need just for psychiatric care and the VA’s decreasing ability to provide it were creating conditions for “a perfect storm.”

Ultimately it may be America’s acquaintance with horror that will force it to confront what health in the fullest sense might mean. After the election, the Service Employees International Union (admittedly, a party with a vested interest) released a poll showing that health care was more important to voters than terrorism, taxes, immigration, or moral values; that its rising cost was their top economic concern; and that 74 percent believe health care should be a high priority for the new Congress. The election didn’t turn on health care; it turned on war, but the profligacy of the war has undermined old arguments for austerity whenever social needs are raised. It is hard to hear about the government spending $1.5 billion a week wreaking havoc for four years and then to believe that comforting the afflicted is simply beyond our collective means. The war has focused political attention on the logical place: the priorities of government. And if Americans are not yet massed behind a vision of what a healthy society is, at least they recognize what it is not.

The day after the election, I visited Tenants and Workers United in Alexandria, which has organized child-care workers, housing cooperatives, a taxi drivers’ co-op, and small business owners in the African American and immigrant communities transforming the face of Northern Virginia. It has also negotiated discounts for the uninsured with a nonprofit hospital chain as well as $1 million in debt forgiveness for people stuck with medical bills. Addressing material needs while developing consciousness, the people grouped here, like other islands of the left intent on rebuilding a base for long-term political change, are reimagining the features of a world fit to live in. Asserting rights to health care, by hook and by crook, is a piece of that bigger, more prolonged project.