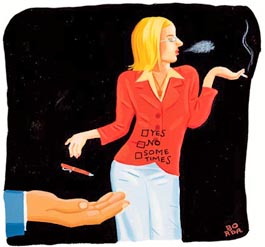 Serrin Foster, the president of Feminists for Life (ffl), is a lively, youthful 51-year-old who wears stylish scarves and has grand ambitions. When we met for a late lunch at Washington’s stuffy Old Ebbitt Grill, she quickly established her feminist bona fides (and tested mine) by making a face over a scantily clad mermaid on the oyster bar menu. I might have overlooked Lady Oyster, but she was a perfect foil for the point Foster was trying to make: Pro-lifers may think of ffl‘s feminism as a “strategy,” but, she insisted, “this is not a ploy—it’s who we are! We’re feminists first.”

Feminists for Life popped into view during the Supreme Court confirmation hearings of John Roberts, now chief justice. His wife, Jane, had been a volunteer lawyer for the Washington, D.C.-based group since 1995, and contributed up to $2,500 a year to it until Roberts became a federal judge in 2003. Jane Roberts’ allegiance to ffl became a data point for calibrating how likely her husband would be to vote to overturn Roe v. Wade. The group’s 15 minutes of fame comes as both the right and the left scramble to reach the majority of the American public that is neither entirely pro-life nor pro-choice, and that is turned off by absolutism on both sides. Accordingly, ffl has developed a “new rhetorical strategy” that threads talk of women’s rights into a brief against abortion. “Since 1973, it’s been the same thing: One side of the abortion wars yells, ‘What about the woman?’ Instead of yelling back, ‘What about the baby?,’ Feminists for Life answers the question,” says Foster.

Part of ffl‘s answer is to lay claim to the mantle of 19th-century suffragists such as Susan B. Anthony, whose home the founder of the group’s New York chapter recently purchased. (ffl also has a contemporary celebrity backer, Patricia Heaton, whose Everybody Loves Raymond character is an archetype of the strong if beleaguered mom.) The group’s latest project is the Elizabeth Cady Stanton Act, which would distribute up to $10 million a year to colleges and universities to improve housing, health coverage, and child care for students who are pregnant or parents.

Lobbying for the bill, Foster urges pro-life groups and members of Congress to think about the “serious reasons,” like lack of good child care or other social services, that make women reluctant to give birth. Abortions don’t happen “because women want to fit into a size 5 bikini,” Foster says. “Parents have abortions for the same reasons that they have trouble raising children.”

To that end, ffl fought welfare reform and supported the Family Medical Leave Act and the Violence Against Women Act. Which means the group can claim to bridge the hypocrisy gap between the pro-life line that every life is precious and the movement’s utter lack of political support for young and poor mothers. But has it really found a third way?

ffl was founded pre-Roe in 1972 by “two women who thought that abortion advocates were hijacking the women’s movement,” according to the group’s website. At first, ffl was largely made up of peaceniks and “earth mothers,” says Foster. She herself previously worked at a research hospital in Memphis and at the National Alliance for the Mentally Ill. “I didn’t come from the pro-life movement,” she says. “I always thought those people were maniacs.” But as the pro-life camp became more militant, ffl evolved too, attracting Catholics such as Jane Roberts and a cadre of women who passionately regret having had abortions.

“We’ve gone from being the granola health-food store to Fresh Fields,” says Foster. “But I’d like to be Wegmans Superstore!” The odds seem slim. ffl claims 26,000 members, but Foster cheerfully admits that this includes the families of women who join and “college students who don’t give us a dime.” According to ffl‘s latest tax statement, it received $364,500 in contributions in 2004 and spent $403,000, and Foster says the Roberts nomination didn’t help fundraising much. Foster is still ffl‘s biggest donor, having given it more than $100,000 in speaking honoraria. Heaton is the other major backer. “Everyone on the pro-life side says, ‘We’re glad you’re here,'” Foster says. “Well, isn’t that wonderful. Pony up!”

If pro-lifers aren’t writing checks for ffl, they do parade the group as proof that the movement cares about helping working women and their families. Deirdre McQuade, director of planning and information at the pro-life arm of the United States Conference of Catholic Bishops, is a former ffl staffer. She says that ffl embodies “the new feminism that John Paul II talked about,” because the group “doesn’t pit the needs of women against the needs of men or children.” Foster is ambivalent about the role the pro-life movement has cast ffl in. “You can be used,” she acknowledges.

Still, might ffl offer the pro-choice movement a model for how to appeal to the vast American middle that wants abortion to be available sometimes, but sees the fetus as a living being? Leaders such as Frances Kissling, president of Catholics for a Free Choice, argue that absolutism is a mistake. “If you’re in an adversarial relationship to the fetus all the time, that’s pretty unappealing,” she says. “As a movement, we have to be more sensitive to the moral value of the fetus.” That insight drives Bill (and now Hillary) Clinton’s formulation of “safe, legal, and rare.”

ffl‘s stance differs significantly from the Clintons’—on the “legal” part. (Reversing Roe v. Wade is a goal, but “not enough,” Foster told the New York Times in 2005; she remains cagey on exceptions for rape or incest.) The group’s literature features abject testimonials from women who regret having had abortions—”Oh My little lost unknown / My first and neverborn / Forgive the ignorance that sent you / To the dark, unmourned!”—as well as context-free quotes from suffragists. (Anthony and her contemporaries didn’t oppose abortion for the reasons that the pro-life movement does today. They considered the procedure a symptom of women’s powerlessness, and feared it would blur the line between a “fallen woman” and a “lady.”)

And upon closer inspection, the Stanton Act appears to be a largely hollow “message bill.” College women are an attractive demographic, one that the pro-life movement struggles to hold on to. A poll that Foster frequently cites reports 37 percent of female high school graduates are pro-choice, but 73 percent of women graduate college pro-choice. And, spread nationwide, the $10 million the Stanton Act would provide is paltry. “This bill is not serious,” Kissling says. “The pro-choice movement is serious, and it has some political clout. The dilemma is, if we support these message bills that don’t really give women much help, then the real message we send is that we’re not strongly committed to women.”

Like all of ffl‘s activities, the proposed bill ignores the best proven method to prevent abortion—contraception. I asked Foster why ffl takes no stance on birth control. “When I walked in the door in 1994, I said, ‘Let’s put contraception in the water,'” she says, but ffl‘s splintered membership prevented it. “There are people who are against birth control for religious reasons. Then there are the hippies and vegans who say no chemicals. Then there are the people who say barrier methods are okay but anything with hormones is not,” she added. “So we decided: Other groups do contraception. We do something different.”

Okay, so ffl is a small nonprofit struggling to keep its disparate base together. But can it really let itself off the hook for spurning the one kind of activism with the potential to significantly reduce abortion? When pressed, Foster retreated into banality. “Marian Wright Edelman”—head of the Children’s Defense Fund—”was right when she said the best form of contraception is education.” As for other forms, Foster exaggerated their failure rates: Three times over lunch she told me of a doctor who’d performed 45,000 abortions, most because the woman’s contraception had failed. “If you’re having intercourse, you’re putting yourself at risk of getting pregnant,” she insisted.

ffl‘s slip was showing. As Kissling puts it, “Feminists for Life want to present themselves as progressive women, whose only interest is protecting women. But when you hear them talk about contraception, it gets weaselly.”