In exchange for 14 vials of blood, science writer David Ewing Duncan had his body tested for no fewer than 320 different chemicals. Duncan wrote about the experience and about the nature of trace chemicals in the body for article in National Geographic and is on a speaking tour sharing fascinating tidbits:

-As a kid in Kansas, he rode his bike through clouds of DDT. Surprise, surprise, he still has a high “body burden” of its byproduct DDE, about 40 years later.

-His level of one particularly toxic PBDE, a flame-retardant, is 10 times the American average and 200 times the Swedish average. He attributes that to flying 200,000 miles last year; planes are “drenched in the stuff.” 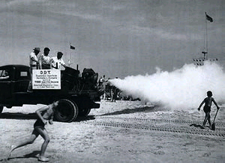 In his article and subsequent speeches Duncan has steered clear of regulatory issues, instead calling for more research. But research often comes long after the damage is done. Take the history of lead:

In 1921, General Motors invented lead additives to gas, paving the way for modern high-power engines. Leaded fuel earned a nickname fast—”loony gas.” But it wasn’t until the 70s that the EPA started regulating it. And over the next decade, through 1986, the EPA dropped the threshold for lead content in gas by 98%. Uranium, CFCs, DDT—same story.

Shockingly, only a quarter of the 82,000 chemicals in use in the U.S. have ever been tested for toxicity, according to Duncan. How long will it take for us to trace the cause of modern epidemics? From the early 1970s through the mid-1990s, one type of leukemia was up 62%, male birth defects doubled, and childhood brain cancer was up 40%, he writes.

Only in the past few years have we developed machines precise enough to test the presence of some of these chemicals in the body, in parts per million, per billion, and even per trillion. It’s like detecting a teaspoon of dye in an Olympic swimming pool, Duncan said, and some of the machines that do it cost a million dollars. Usually as many tests as Duncan had would cost $30,000. (For only $25 you can send a lock of hair in for a mercury test.)

That makes it hard to broadly survey the dangers of chemicals. And nearly impossible to prove in court that they have caused any illness.

In Europe, on the other hand, a new law “radically revises how companies must evaluate potential dangers.” From now on there, new chemicals will not be presumed safe until proven dangerous, but must be proved safe before sale. With the new Congress, can we follow their lead?