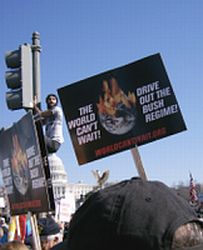 The tens of thousands of antiwar protestors gathered on the National Mall today had their gazes fixed squarely on the U.S. Capitol, in more ways than one. The theme of the day seemed to be that the new Democratic-controlled Congress could—and perhaps would—stop the war, an idea rooted more in sincere wishful thinking than in reality.

Amid the peaceful demonstration, CNN reported, “about 300 protesters tried to rush the Capitol, running up the grassy lawn to the front of the building.” Their chant was “Our Congress,” while “several dozen shouting ‘We want a tour’ broke away and tried to get into a side door.” In a move that may well turn out to be highly symbolic, police, after scuffling with the protestors, set up a series of barricades on the Capitol steps.

John Conyers, the Detroit Democrat who heads the House Judiciary Committee, spoke to the demonstrators’ hopes, promising to defund the war if Bush doesn’t stop it. “George Bush has a habit of firing military leaders who tell him the Iraq war is failing,” he said, but “He can’t fire you.” And, in a reference to Congress, “He can’t fire us… The founders of our country gave our Congress the power of the purse because they envisioned a scenario exactly like we find ourselves in today. Not only is it in our power, it is our obligation to stop Bush.” 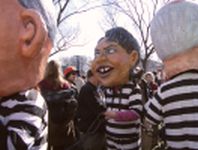 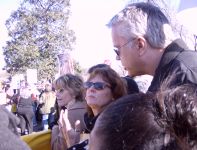 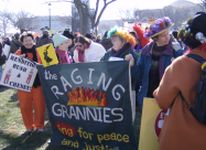 While it may be encouraging to see figures like Conyers in positions of power in Congress, the general attitude of the Democrats is less promising. Antiwar public opinion might stiffen the Dems, but cutting off funds is a doubtful prospect. Any such cutoff of funds must begin in the House Appropriations Committee, where John Murtha’s subcommittee on military spending holds sway. Murtha has said he is all for defunding the war, but his principal patron, Nancy Pelosi, has never suggested cutting off money for the troops. The Blue Dog Dems, perhaps the most powerful swing bloc in the House, are even less likely to do so.

In fact, a move in Congress to defund Iraq is just what the Republican Right wants. Since Congress has no power to actually pull out troops, they are left with the prospect of cutting off funding for troops still locked in combat. Pro-war Republicans lie in ambush waiting for that fatal political move, which will send their ranks storming out of the trenches screaming that the Dems want to “cut and run,” leaving our troops twisting in the wind.

The presence at the antiwar rally of Jane Fonda, who emerged as the major personage of the day, immediately linked the Iraq conflict to Vietnam, and she made that plain in her speech, citing: “Blindness to realities on the ground, hubris… thoughtlessness in our approach to rebuilding a country we’ve destroyed.” The Vietnam parallel in fact presents a history lesson for those depending on Congress to get us out of Iraq: One Democratic Congress after another backed the Vietnam War. The Democratic president, LBJ, went down because he supported the war. Humphrey backed the war. And in the end, it wasn’t Congress, but Richard Nixon, who finally, reluctantly, brought the troops home.