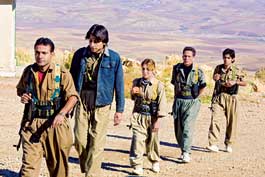 The green and brown scrub brush in the Qandil Mountains acquires a thick layer of snow by late fall. In happier times, these peaks at the border between Iraq and Iran would offer tourists spectacular views, but these days the only sightseers are men and women with AK-47s slung over their shoulders. They are Iranian Kurdish guerrillas based among their Kurdish brethren in northern Iraq, and at the moment, they may be the closest thing the Bush administration has to an ally in its confrontation with Tehran.

Kurdish and American sources say the United States has been supporting guerrilla raids against Iran, channeling the money through organizations in Iraqi Kurdistan; last fall, The New Yorker‘s Seymour Hersh reported that Israel is also providing equipment and training. When I arrived in Sulaymaniyah, the Kurdish city closest to the Iranian border, it was hard to miss the Green Berets in civvies walking down the main street. “Suli is like some Balkan city years ago,” one U.S. officer told me. “You’ve got spies everywhere. Everyone wants to know what everyone else is doing.” The seedy Ashti Hotel looked like something out of a Graham Greene novel, its smoke-filled lobby a meeting place for obscure diplomats, businessmen, soldiers, and spies. Men sat around staring at glasses of strong tea; every now and again they’d pour a bit of tea into their saucers, let it cool, and slurp it down. I met a Kurdish military adviser at the Ashti, and when the U.S. Army came to escort me for a story on its operations, Humvees pulled up by the hotel.

Getting to the actual guerrilla camps was relatively easy. Kurdish officials unconvincingly insisted they had no idea how to find the fighters, but cabdrivers had no trouble pinpointing the camps. As my four-wheel-drive vehicle climbed the mountainside, young women in green pants and the distinctive twisted Kurdish headscarf appeared along the road. They were fighters with the Party for a Free Life in Kurdistan, or pjak, which claims its troops are almost 50
percent female.

Part underground movement, part cult, pjak requires its fighters to eschew sex and study the teachings of Abdullah Ocalan, a Nietzsche-quoting Turkish Kurd who is its spiritual leader. Ocalan’s political organization, the radical Kurdistan Workers Party (pkk), is classified as a terrorist organization by the U.S. State Department. pjak‘s relationship with the party is supposed to be arm’s length, but I had to pass through two pkk checkpoints on my way to the guerrillas’ camp, each of them relaying information up the line via walkie-talkie. Finally, the fighters welcomed me into a room with a threadbare carpet on the floor and a kerosene stove blasting heat; posters of Ocalan hung on the wall along with the pkk flag. While waiting for their leaders to descend from the mountains, I asked one of the women what they did to stave off boredom. “We watch satellite TV,” she said, insisting that they cared only for news programs before confessing, with a shy smile, “We like Brad Pitt and Mel Gibson.”

That was about the only American influence anyone at the camp would admit to. The fighters’ commander had recently died in a flash flood, and his replacement—a fortysomething man with prematurely gray hair who stood perhaps 5 feet 5 inches—introduced himself as Zenar Agri. He informed me that in 2006 the guerrillas had killed about 100 Iranians in their cross-border skirmishes. He said they were not getting U.S. help, then smiled, “But we would love to have American support.” He also told me that before the pkk‘s emergence, “the Kurds didn’t know about their history and how to struggle,” but now Kurds could follow Ocalan’s road to liberation.

Back in the valley, I found a different kind of Kurdish organizing at the
University of Sulaimani, where many
Iranian Kurdish activists have come to study. The scene could have been any U.S. campus; almost everyone wore blue jeans, and only a few of the women had their heads covered. I sat down with two Iranian students who said they had come to Iraq illegally, following smugglers’ trails over the mountains. They talked openly about the competition between Iranian Kurdish parties to attract U.S. support. Hiwa, a film student who described himself as the future Stanley Kubrick of Kurdistan, told me Washington ought to be ecumenical: “All parties should have connections with the U.S.”

So far, Washington seems to feel the same way. The two main Iranian Kurdish parties, Komala and the Kurdish Democratic Party of Iran (kdpi), have been allowed to operate openly in northern Iraq; both say their focus is on political organizing within Iran. “We have not opposed armed struggle,” Mustafa Hejri, leader of the kdpi, told me. “But for now we believe political activity benefits the party more.” Hejri, along with other top kdpi and Komala officials, went to Washington last year for meetings at the State Department and on Capitol Hill. They “listened to us and asked questions,” Komala leader Abdullah Mohtadi told me. “It was a step forward.” Most other Iranian opposition leaders I spoke to were critical of U.S. policy toward Tehran and said the administration’s allocation of $85 million to “promote democracy” in Iran had backfired by making the population rally around the embattled Islamist government. The Kurdish Iranian parties, on the other hand, told me they were looking forward to getting U.S. funding. “We’re pragmatists,” Mohtadi told me. The United States “can’t make democracy by force, but it can topple dictators.”

Reese Erlich’s book, “The Iran Agenda: The Real Story of US Policy and the Middle East Crisis,” will be published in September 2007. See his interviews with Nobel Laureate Shirin Ebadi and other Iranian opposition
leaders at: motherjones.com/iran_dissidents.