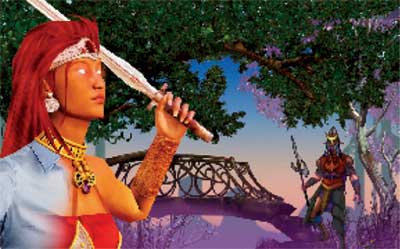 From the May/June issue.

The current population of virtual worlds, also known as “massively multiplayer online role-playing games” (mmorpgs) such as World of Warcraft, EverQuest, and Second Life, is estimated at more than 20 million. The population of Mexico City is 19 million.

20% of mmorpg gamers say that the virtual world is their primary place of residence. The real world, a.k.a. meatspace, is just a place to get food and sleep.

Virtual-world gamers play an average of 22 hours a week. The average American spends around 8 1/2 hours a week eating.

In 2005, the fantasy role-playing game EverQuest added a feature that allowed players to place a Pizza Hut order without leaving the keyboard.

EverQuest players spend an average of 23% more buying other players’ male characters than female characters, even though both sexes have the same abilities in the game.

The virtual-currency trading company ige Ltd. estimates that in 2007 players will spend $1.5 billion on virtual goods and services, from swords to sex.

Entropia Universe offers its players a debit card that can be used at real-world atms to withdraw up to $3,000 a month from their supply of virtual cash.

In January, Sweden announced it would be the first country to open an embassy inside Second Life. It is also considering taxing its citizens’ virtual earnings.

An estimated 500,000 Chinese gamers are “gold farmers” who perform menial tasks inside online worlds to create virtual goods to sell to players in the West.

In 2005, a man in China received a life sentence for murdering another gamer who had sold off his virtual sword inside the game Legend of Mir 3.

When a World of Warcraft player died last February, fellow gamers held an online memorial by a virtual lake “because she loved to fish in the game.” The mourners, who came unarmed, were killed when the event was raided by rival players, who posted footage of the attack on YouTube.

About 29% of female online gamers and 8% of male gamers say they’ve dated someone they first met in a game.

1/3 of female gamers make their characters get married; 10% of male players do. A Second Life minister who performs avatar weddings says most virtual marriages last about a month.

A survey of college-aged Sims players found that 50% with divorced parents made their game characters get divorced. No players whose parents were still married did.

When a Chinese couple filed for divorce in 2005, the husband reportedly tried to keep $5,000 worth of virtual property in exchange for their real-world apartment. The wife wanted to split both. They had met the year before inside an online game.

An hour with a virtual escort in Second Life costs between 4 and 12 real dollars.

The Bare Naked Ladies, the Black Eyed Peas, and Depeche Mode have recorded songs in Simlish.

Formed to fight for political rights for avatars, the Second Life Liberation Army has bombed a virtual Reebok store and shot avatars shopping at American Apparel.

For $1,500, live-shot.com offered armchair hunters the chance to shoot a real animal via the Internet. After lining up crosshairs on their computer screen, visitors could fire live rounds with a click of the mouse.

In 2003, Hezbollah released a video game in which players were awarded medals for throwing grenades at images of Ariel Sharon.

America’s Army, the Army’s recruitment video game, has been downloaded 17 million times. “It shows we are not robots,” explained an Iraq vet who appears as a character in the game. “We’re just people.”

The Navy has spent $4 million to study the use of virtual reality to treat ptsd. Says an official, “We also hope that this type of therapy, with its video-game-like qualities, will resonate well with the current generation of warfighters.”

Nearly half of online gamers say they are addicted to their games.

“Gamesterdam,” a rehab program for video-game addicts, opened in Holland last July to “give these people a taste of life. Real life!”

Virtual Worlds at a Glance