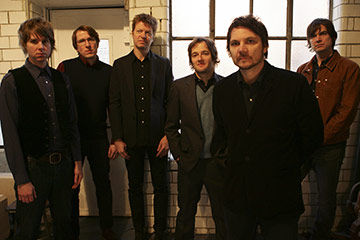 Before the release of Wilco’s new album, Sky Blue Sky, bassist John Stirratt said, “People may have an idea in their head about what it will sound like, but it’s going to be different than that.” Perhaps the greatest tribute to the band, though, is that it has become virtually impossible to predict how new Wilco music will sound. The group’s 1995 debut, A.M., along with its Mermaid Avenue homages to Woody Guthrie, placed it at the forefront of the roots-based Americana movement, but Wilco has consistently changed direction. The struggle over its 2002 album, Yankee Hotel Foxtrot—rejected by its label, Reprise Records, then posted online and later picked up by another division of its label’s conglomerate—was chronicled in the documentary I Am Trying to Break Your Heart. The follow-up, 2004’s A Ghost Is Born, moved bandleader Jeff Tweedy’s guitar into the spotlight; the album’s release was interrupted by Tweedy’s trip to rehab for an addiction to painkillers. Sky Blue Sky is Wilco’s most far-ranging album yet, incorporating pop melodies, jagged guitars, folkish sing-alongs, and even a soul/gospel feel. It’s deceptively accessible, but repeated listens reveal more and more layers and moving parts. As Tweedy said of the album, “The further along we got, the less it felt like we had anything we needed to be true to.”

Mother Jones: Between your extensive touring and all the side projects (see “A Side of Wilco“), when was this album recorded?

Jeff Tweedy: It’s always really blurry to think about when anything starts or ends with Wilco—we’re kind of always touring and in the studio in between. This goes back a couple of years, between tours on Ghost. We decided to make some more presentable recordings and spent some money on our studio. That makes you feel a little more serious about getting work done.

MJ: And getting band members back from their side projects must help. Why aren’t other bands as open to experimentation?

JT: With some bands, there’s a fear that if people do other things, the band is going to change and not hold it together. That’s kind of sad; if you love someone, set them free, right? I mean, Sting said that, and he knows a few things about music.

MJ: After much turmoil, the band’s membership has been stable for the past few years. Has your working process changed as the lineup of the band has changed?

JT: The idea for the way we recorded this record has been around a long time, but we really haven’t been able to execute it before. To be able to sit in a circle and hear everybody at once, without having to scrutinize, overdub, and do all the laborious stuff I don’t have the patience for. It’s what we’ve been aiming for with Wilco the whole time.

MJ: But so much of A Ghost Is Born—especially your guitar—had a very live feel.

JT: As much as Ghost was live, everybody in the band wasn’t always pointed in the same direction. There were still moments when we had to backtrack and overdub. That gives me the chance to overthink things, and that’s how you end up with 15 minutes of guitar noise. And I stand by that, but it was conceptualized, as opposed to just being something musical. I just don’t want to think that much if I can avoid it.

MJ: Why do you think it’s gotten easier?

JT: A huge part is that I’m a lot healthier, have a lot more stamina. I don’t even smoke anymore. I’m a lot happier than I’ve ever been. When you’re dealing with addiction and depression, you end up not being as direct or as honest in the writing and the process as you’d like to be. The world is complex, confusing, scary enough. Before, I would make things too baroque, too complicated. Now I just want somebody to sing me some fucking songs.

MJ: In times like these, though, you must be tempted to write songs that are darker.

JT: It’s hard for people to see how they can change how dismal things look, but there are still wonderful things to sing about. Music is the only way we are capable of talking about the most important things.

MJ: How do you look back on the fight over Yankee Hotel Foxtrot? In retrospect, it seems like such a harbinger of the crises we’ve seen in the music business the past few years.

JT: I think any kind of digital revolution that was going to happen was already well in motion. Reprise had a certain investment and expected a certain return, and Wilco still hasn’t lived up to that.

MJ: So even though it was your best-selling album, that wouldn’t have been enough for a major label?

JT: I think they made the right call, and the bottom line bore that out. But music will find ways to reach into people’s lives. It’s just that an extremely wasteful industry has been forced to evaluate its business model.

MJ: Where does the soul feeling on Sky Blue Sky come from?

JT: There’s probably not any kind of music that means more to me than gospel and soul. If I could be any type of singer in the world, it would be like an Otis Redding. I heard somebody say that soul music is being proud of where you’re from and what you’ve accomplished, and letting that show. Losing some self-consciousness and ego to join something larger. I like that idea a lot, just letting it all hang out, and on this album we did our best at that.

MJ: Some of the songs hark back to the rootsier sound Wilco was initially known for—as if it’s all right for you to play that style again.

JT: Well, it wasn’t ever not all right, it’s just not what I wanted to do. But that’s not the worst thing someone could say—a lot of people really liked what Wilco used to do, and a lot of people missed it. I never intended to shut them out, and I’m just glad that so many of them came along for the other things we’ve done.

A Side of Wilco

“We’re musicians, we like to play music,” says Jeff Tweedy of the band’s numerous, ongoing side and solo projects. “It makes it more fun to get together and know that Wilco isn’t something we have to be desperate about or expect too much from.” Here’s an incomplete list of the band’s other gigs and recent releases:

jeff tweedy (guitar, vocals)
Born Again in the USA, by Loose Fur, a scrappy trio with drummer Glenn Kotche and producer Jim O’Rourke.
Another Fine Day, by Golden Smog, an all-star power-pop band with a rotating cast, including members of the Jayhawks, the Replacements, and Soul Asylum.

nels cline (guitar)
New Monastery, by Nels Cline, featuring experimental guitar work from a master with more than 100 recordings under his belt.