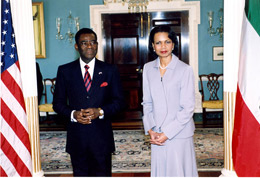 On an unusually warm morning in Washington, D.C., last spring, Secretary of State Condoleezza Rice stood before a pack of reporters for a briefing, one of Africa’s most notorious dictators at her side. Rice was her usual assured self, answering questions in thoughtful paragraphs. The man with her—Teodoro Obiang, president of the tiny, oil-rich nation of Equatorial Guinea—seemed less comfortable. As the journalists peppered Rice with questions, he clenched his hands against his suit coat and stared at her with a tight, puzzled grin. During his two-decade reign of torture and terror, Obiang has never faced such meddlesome media; Equatoguinean radio has declared that Obiang has “permanent contact with the Almighty” and therefore can “kill anyone without being called to account.” Rice turned to Obiang. “Thank you very much for your presence here,” she cooed. “You are a good friend, and we welcome you.”

It was a moment so unsettling that State Department officials privately felt compelled to downplay Rice’s demeanor, saying she had not meant to be so effusive. But for Cassidy and Associates, a prominent D.C. lobbying and communications firm, the secretary’s comments were payoff for years of hard work. Since 2004, according to Department of Justice reports, Equatorial Guinea has paid Cassidy and Associates at least $120,000 per month to overhaul the country’s image.

At times, Cassidy almost functions as a shadow foreign ministry for Equatorial Guinea. One longtime Africa observer says that at a recent D.C. event, he saw Cassidy staffers flanking the Equatoguinean ambassador passing her notes throughout her speech. “She was literally in the hands of her handlers,” he says. Cassidy has also helped set up a social development fund to channel the country’s oil money into welfare projects: “Obiang is intent on improving the country,” says Juan Carlos Benitez, who is responsible for Cassidy’s Equatorial Guinea account.

Yet on the ground, improvements are hard to come by. Equatorial Guinea has one of the world’s highest incomes per capita, but in one of the 10 most corrupt nations on earth, little of that money trickles down. Obiang rules the country with an iron fist: According to State Department reports, suspects have been tortured to death and prisoners raped by police. Still, Cassidy has delivered results for Obiang in D.C. “A few years ago, at least U.S. officials wouldn’t talk about the relationship with Equatorial Guinea, or they would admit all the problems and horrible human rights abuses,” says Frank Ruddy, the former U.S. ambassador to Equatorial Guinea. Now, he adds, “you would have thought this is Mother Teresa’s brother running Equatorial Guinea.”

Such makeovers are the result of sophisticated campaigns. In the past, dictatorships simply used lobbyists to court the mostly below-the-radar support of American politicians. But in the post-9/11 world of 24/7 media coverage of every human rights crackdown in Kazakhstan or every whisper of Saudi Arabia funding extremists, authoritarians need a different strategy—an intensive, crisis-management approach to PR. Like Angelina Jolie, who transformed her image from wild woman to paragon of charity, these dictators have rebranded themselves completely, using every avenue to promote their new images.

“The Saudis were the first to get this new era of PR,” says Kevin McCauley, editor of O’Dwyer’s Public Relations, the leading trade publication covering the PR industry. Shortly after 9/11, Saudi Arabia entered into a $14 million-a-year contract with Qorvis, a Washington PR firm. Qorvis launched a TV campaign with ads on political talk shows featuring a procession of Saudi royals appearing alongside U.S. presidents, to highlight Riyadh as a close ally. Other TV spots, which ran in 14 American cities, touted the “shared values” of the United States and Saudi Arabia. The firm also shuttled Saudi officials on whirlwind tours of major media outlets, and broadcast ads promoting the 9/11 Commission finding that there was “no evidence that the Saudi government as an institution or senior Saudi officials individually funded [Al Qaeda]”—while omitting the report’s conclusion that “Saudi Arabia has been a problematic ally in combating Islamic extremism.” The PR blitz helped reduce the number of anti-Saudi articles and speeches, says McCauley, which allowed the Bush administration to keep ties to the kingdom close.

“Other countries saw how this worked,” notes McCauley, and in the wake of the Saudi contract, several authoritarian regimes beefed up their PR efforts. In 2002, petro state Qatar hired PR and lobbying firm Rahall Consulting to promote its commitment to democracy, though Qatar has no real opposition party. Rahall’s owner, Tanya Rahall, is the sister of Rep. Nick Rahall (D-W.Va.), who, after the contract was signed, offered congressional resolutions praising Qatar’s “democratic reform.” Uganda hired public relations giant Hill & Knowlton to bat down criticism of its atrocious human rights record. Kazakhstan, where President Nursultan Nazarbayev won more than 90 percent of the vote in a widely criticized election, ran a U.S. advertising campaign touting itself as a “developing democratic country.” Even the genocidal Sudanese government tried to get into the action, spending $530,000 on a firm called C/R International, run by a former State Department official, to organize trips to Sudan for congressional staffers and to emphasize that Sudan was “cooperating in the war on terrorism.” The deal was canceled in the face of public scrutiny. Nation rebranding has become so common it even has inspired its own academic discipline, including a journal called Place Branding, in which professors pen lengthy, footnoted discourses on topics such as “How Can a Place Correct a Negative Image?”

Sometimes, such PR campaigns do more than put lipstick on a dictator. In the case of Libya, the PR firms and advisers pushed for real reform—partly because some top Libyan officials, including the son of Moammar Qadaffi, apparently also supported change. In February 2006, one of those advisers, Michael Porter, presented his report on Libya’s economic and political decay to an audience of 1,500 Libyan officials and businessmen, who greeted his findings of corruption and a privileged plutocracy with applause. Porter’s researchers later met with Qadaffi himself and urged him to undertake political reforms and open the economy. Though Libya remains a dictatorship that jails some dissidents, it has renounced terror, begun to open its markets, and allowed in Human Rights Watch, which—while remaining overwhelmingly critical of the regime—has praised Tripoli for gradually moving toward greater freedom.

PR firms claim that the Libya case is not unique: “Our firm really said to leaders, ‘This is what you need to do.’ The whole idea was to encourage them to reform,” says Adwoa Dunn-Mouton, who represented African governments such as Cameroon while working for the Washington Strategic Consulting Group, Inc. Donald Steinberg, a former ambassador to Angola, says that during his tenure, the regime’s PR firm had more success than him in persuading the government to make changes. “They could deliver a message we couldn’t,” he says.

Still, Libya may be the exception; most rebranding is focused on making it easier for rogues to do business with the White House. And it works: Kazahkstan’s Nazarbayev won a meeting with President Bush last September. After employing three PR firms and various policy consultants, Azerbaijan’s strongman, Ilham Aliyev, not only got an audience with Bush last April, but Bush subsequently announced that Aliyev “understands that democracy is the wave of the future.” If so, he has a long way to go: Peter Bouckaert of Human Rights Watch recalls watching Aliyev’s “democracy” in action in 2003. “The government clearly stole the election, and then brutally beat hundreds of people who poured out in the streets in protest. The day after the election, I watched from the roof of a hotel in Baku as thousands of riot police beat protesters unconscious.”