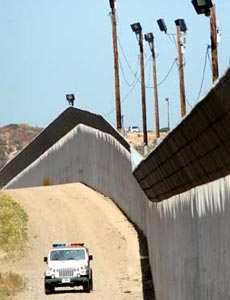 For all the talk about immigration reform on the Hill, there has been notably little discussion about what is driving Mexican immigrants to pour over the border into the U.S., let alone any debate about measures that might go to the root of the problem. According to Laura Carlsen, the director of the International Relations Center’s Americas Program, the reason behind the “massive out-migration” is fairly clear. Put simply, she wrote not long ago, “Mexico is not producing enough decent jobs for its people—and the United States is hiring.” It would seem, then, that one potential answer to the United States’ so-called immigration problem would be an effective development policy toward Mexico (whose citizens make up 56 percent of America’s undocumented population, according to the Pew Hispanic Center), including both private investment and foreign aid. As it stands, Mexico receives the bulk of its aid not from the U.S. government or corporations but from immigrants themselves.

Despite having incomes well below the national average, many Mexican immigrants regularly send a portion of their earnings home to support their families and sometimes entire communities. Remittances from immigrant workers now stand approximately equal to oil revenues as one of the two largest sources of foreign income in Mexico. According to Guillermo Ortíz, head of Mexico’s central bank, they totaled $23.54 billion in 2006.

These remittances – the vast majority sent from the United States, primarily in payments of $100 to $200 — exponentially exceed foreign aid to Mexico. According to the Century Foundation, for every dollar in official foreign aid that goes to Mexico, immigrants send home $150. The bottom line is that these remittances have become a substitute—and a poor one at that—for effective development policies aimed at generating employment and stimulating rural production.

While the United States frequently grouses to the Mexican government that it ought to provide economic opportunities at home that will keep its citizens from teeming over our border, we’ve been less quick to provide Mexico with much help in doing so. To the contrary, the U.S. continues to exploit Mexico’s resources for its own needs. Those resources, of course, include the very undocumented workers we complain about, which, like the illicit drugs we likewise condemn, would soon cease to flow north across the border if there were no demand for them here.

The 1994 North American Free Trade Agreement (NAFTA) was supposed to be a tremendous boon for Mexico, as well as for the United States and Canada, creating the beginnings of a common market for the benefit of all. More than 13 years later, though, the relationship still smacks of colonialism. Howard Zinn, the author of A People’s History of the United States who has documented the history of U.S. colonialism in Latin America, says of the current immigration debate, “Why should capital go freely across borders while people cannot? These are human beings trying to make a better life, for god’s sake. Why is the wall on the Mexican border more acceptable than the Berlin Wall?”

Contrast all this to what’s happened in the European Union, which was formed just two years prior to NAFTA, in 1992. Through the post-war years and well into the 1980s, most of the huge number of foreign guest workers in then-richer nations like Britain, Germany, France, and Switzerland came not from the so-called Third World, but from current European Union member-countries like Italy, Spain, Portugal, Greece, and Ireland. Instead of just employing foreign workers, though, the wealthier European nations also jumpstarted the economies of their poorer neighbors with billions of dollars in investments. As Douglas Massey, a Princeton University sociologist and co-director of the school’s Mexican Migration Project, told the San Francisco Chronicle last year, if “the United States had approached Mexico and its integration into the North American economy in the same way that the European Union approached Spain and Portugal in 1986, we wouldn’t have an immigration problem now.”