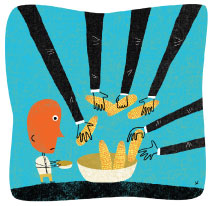 Eight hundred fifty million people worldwide suffer from chronic malnutrition, according to the United Nations. Though some starve because of war or natural disasters, many go hungry simply because they cannot afford to buy food. The solution seems straightforward: Give cash to groups on the scene that can purchase and distribute food locally. That’s how the European Union does it.

But not the United States. We give more than half of the world’s nearly $4 billion of annual food aid. Yet by law, the U.S. Agency for International Development and other federal agencies can’t simply write checks to feed the hungry. Instead, they must buy American-grown food from American conglomerates; 75 percent of it must be shipped on American-flagged vessels. It’s a great deal for domestic businesses, but not for the needy: The Government Accountability Office recently found that 65 percent of federal food aid expenditures are not spent on food. In fact, due to rising transportation and business costs, the amount of actual food delivered by U.S. aid programs has declined by more than 50 percent over the past five years.

Now Congress is considering overhauling this system via a Bush administration proposal that would allow 25 percent of food aid to be distributed as cash grants. That move is opposed by shipping companies and agribusiness giants such as Archer Daniels Midland, as you might expect, but also by prominent congressional Democrats and nongovernmental organizations such as Feed the Children and the American Red Cross. Why would these groups be against helping the poor more efficiently? Turns out that when food shipments finally get to where they’re needed, they’re often given to ngos, which turn around and sell them to raise money. In the last three years alone, the groups sold off $500 million of American food aid. (Save the Children has criticized the practice; care has pledged to stop it.)

State Department and Office of Management and Budget staffers have been quietly lobbying to convert some of the aid to cash grants for years, and the White House seems to be listening. But Rep. Tom Lantos (D-Calif.), chairman of the House Foreign Affairs Committee—which helps write the rules for international aid programs—says that changing the status quo is “beyond insane” and would cause support for food aid to “vanish overnight.”

However, Congress is due to pass a new farm bill this fall, and Senator Tom Harkin (D-Iowa) has proposed a tiny pilot program for $100 million in cash grants over four years. “The change is more like plate tectonics than a revolution,” says Gawain Kripke, policy director of Oxfam America. “But everyone sees that what exists now just doesn’t make sense.”