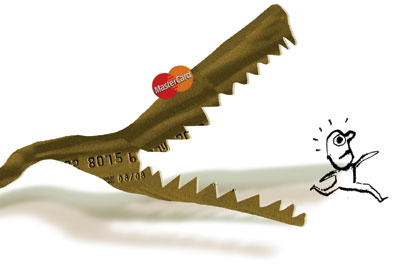 A “preferred customer,” according to one MasterCard vice president, is someone with a “taste for credit” who’s “willing to make minimum monthly payments—forever.”

60% of Americans have been in credit card debt for more than a year.

If you owed that much on a card with a 14% apr (the average interest rate) and made 2% monthly payments, it would take you more than 6 years to pay off—and you’d pay $4,922 in interest.

1/3 of Americans claim they pay off their credit card bills in full every month.

Inside the credit card industry, these customers are known as “30-day wonders” or “deadbeats.”

The average American household spends 14% of its disposable income paying off debts. It puts negative 0.5% into savings.

Last year, banks sent out 8 billion credit card applications, a 30% increase since 2005. Credit card companies spend an average of $58 to sign up a new customer.

Madonna reportedly gave her 9-year-old daughter a credit card with a $10,000 limit in 2005. A friend told In Touch, “She is hoping to teach Lourdes to be responsible with money.” The Material Girl’s publicist denies it.

In March, Hasbro announced that Visa would be the “preferred form of currency” in a new Game of Life. A Visa exec called the move “a powerful illustration of consumer preference to pay with Visa for everyday purchases and once-in-a-lifetime experiences.”

Americans charged $51 billion worth of fast food last year, a 29-fold increase since 2001.

1/3 of low- and middle-income households report going into credit card debt to pay for rent, utilities, and food.

Kiss of Debt; Make Love, Not Debt; Wallowing in Debt; and Broke-Ass Student are among the dozens of “debt blogs” that chronicle their authors’ struggles to pay off credit cards and other bills.

Since 1996, when the Supreme Court struck down limits on credit card fees, the average late penalty has jumped 162% and the average fee for exceeding credit limits is up 138%.

After Discover charged a woman more than $9,000 in interest, penalties, and fees on an initial bill of $1,900, an Ohio judge erased her debt in 2004, slamming the company for being “unreasonable, unconscionable, and unjust.”

Nearly 1/3 of bankruptcy filers owe an entire year’s salary on their credit cards.

In 2005, Congress tightened bankruptcy rules at the behest of credit card companies.

In 2006, the top 5 credit card companies—JPMorgan Chase, Bank of America, Citibank, Capital One, and HSBC—made $8.5 million in congressional campaign contributions.

Almost half of bankruptcies are due to medical expenses, according to a 2001 survey.

As of late 2005, 900 soldiers injured in combat owed the military $1.2 million. Nearly 3/4 of these debts were due to errors. An Army sergeant paralyzed below the waist was saddled with $15,000 of debt.

Soldiers with a Pentagon-approved Military Star card get lower interest rates if they are deployed in a war zone. All debts are written off if the cardholder is killed in combat.

contract hits: A typical card’s contract was less than a page long in the early ’80s; it’s now more than 30. Terms can change at any time, for any reason.

let’s bounce: 20 major cards issue blank “convenience checks” that they may decide not to honor, for any reason. Cardholders are slapped with an average of $31 in fees for each rejected check.

growing rates: Almost all popular cards hike interest rates if users miss payments or exceed credit limits. The average “default rate” in 2005 was 27.3%. More than 2/3 of cardholders don’t know about this.

outside interests: Some cards raise customers’ interest rates if they miss payments to other banks or creditors.

double trouble: Several cards use “two-cycle billing” to charge interest on the original amount spent—even if you’ve paid part of it off.

In 2004, homeowners spent more than $150 billion from second mortgages to pay off credit cards and other debt.

The World Wide Association of Specialty Programs encourages parents to refinance their mortgages to send their kids to its “emotional growth boarding schools.”

In 2001, First USA signed up two students as human billboards in exchange for paying their college tuition. The credit card company made late payments, almost forcing them to drop out.

Installed in the cars of drivers with subprime auto loans, Payment Protection Systems’ On Time device issues payment reminders and disables the vehicle if a payment is missed.

The Koran forbids charging interest. In 2002, a bank in Bahrain released “the first Islamic credit card that conforms to Sharia principles.”

In 1978, the Supreme Court ruled that banks only have to follow the interest rate limits in the state they’re based in—not the states where their customers live.

After the ruling, Citibank’s credit card division relocated to South Dakota, which had just lifted its usury laws. “That was a good deal for us,” said then-Governor Bill Janklow. “It was a hell of a deal for them.”

In Dante’s Inferno, usurers occupy the seventh circle of hell.