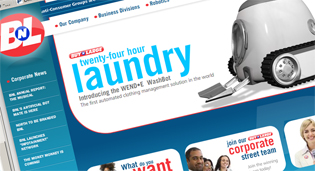 In this day and age, with cynical tweens skimming past ads on their Tivos, it’s tougher than ever to come up with advertising that actually reaches the target consumer. Not surprisingly, movies and TV shows are at the forefront of a kind of viral internet promotion that’s almost an extension of the creative work itself: the fake Web site for a fictional organization. ABC’s “Lost” was one of the first to try this out, creating a site for The Hanso Foundation as part of the show’s mythology; the site’s calming turquoise palette and new age-y music struck a perfectly creepy tone.

Now, two upcoming films have created fake company sites, with varying degrees of creative success: first of all, the highly-anticipated “Cloverfield” project (from “Lost” producer J. J. Abrams) which may or may not be a new Godzilla movie, has spawned a website for the Tagruato Corporation, a deep-sea drilling concern whose subsidiaries include, bafflingly, the Slusho! drink company, or as they put it, “Slusho! brand happy drink is a icy cool beverage… [that] contains a “special ingredient” that customers can’t get enough of.” Hmm, what could this have to do with Godzilla? Even though the movie’s hand-held trailer (watch it below) was pretty awesome, I’m not obsessed enough with this to really understand what’s going on here.

A little more entertaining for the casual fan is Pixar’s fake site for its upcoming robot movie, “WALL-E”. The film is set some time in the future, and a single corporation apparently builds and owns just about everything. The company is called, awesomely, “Buy n Large,” and its Web site is hours of fun. From the perfectly-calibrated corporate-speak (“…by visiting the Buy n Large web site you instantaneously relinquish all claims against the Buy n Large corporation…”) to the “World News” stories about floating cities and ads for the mood-altering drug “Xanadou” (“effortlessly feel like you’ve just purchased that once-in-a-lifetime item!”), the site is both a stand-alone parody of corporate America and an intriguing teaser for the movie. There’s a couple places you might want to call David Foster Wallace (“Buy n Large to brand direction ‘North'”) but the story on “Pix-Vue” Animation Studio’s new “4-D” film is priceless. And I totally need that laundry robot and the 1,000,000-zettabyte hard drive, like, right now. Considering the movie looks like another cutesy romp with big-eyed creatures on some sort of quest, this site might be the best part of the whole deal.