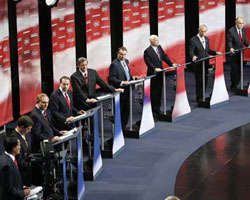 There was a surprise winner at yesterday’s Republican presidential debate in Dearborn, Michigan: the environment. The candidates — joined for the first time by Law and Order star Fred Thompson — came out nearly universally in favor of increased research on renewables and a decreased dependence of foreign oil. But their motivations weren’t of a Save-the-Whales strain.

“This is a matter of national security,” said Rudy Giuliani. “You’ve got to support all the alternatives. Hydroelectric power, solar power, wind power, conservation — we have to support all of these things. We’ve got to support them in a positive way. And this is an area in which the federal government, the president has to treat this like putting a man on the moon.” And just in case you forgot, he added, “It is a matter of national security.”

And while Sam Brownback made it clear he would drill for oil in Alaska and off the coast of basically every American state if it meant the United States imported less oil from the Middle East, he also challenged the automakers who had welcomed the candidates to the Detroit area. “We’ve got to get more electricity involved in our car fleet,” he said. “They’ve got hybrid cars; they’ve got flex fuel cars. I think that’s a big part of the answer. I’d like to see us move forward with getting those first 20 to 30 miles off of electricity that you plug into at night.”

When asked if oil companies should use their record profits to fund renewables research, John McCain sounded just a little like Al Gore. “I would not require them to, but I think that public pressure and a lot of other things [might cause them to do so voluntarily]. Including a national security requirement that we reduce and eliminate our dependence on foreign oil and [that] we stop the contamination of our atmosphere.” Climate change, he said, “is real and is taking place.”

But no matter how green-friendly the field got, they couldn’t separate their rhetoric from the overly-simplistic black-and-white nature of their foreign policy vision. Governor Mike Huckabee, for example, expressed frustration with the slow pace of renewables development (“We keep talking about 15-, 20-, 30-year plans; that’s nonsense. If we don’t start saying we’ll do this within a decade, we’re never, ever going to get there.”) but then drowned it out with the sound of rattling sabers. “We’re in a race for our lives against people who want to kill us,” he said. “And a lot of the reasons that we are entangled in the Middle East is because our money buys their oil, that money ends up coming back to us in the way of Islamo-fascism terrorists.”

But liberals and environmentalists may just abide the tough talk of Huckabee and his Republican brethren, because the end result is one they can embrace. Said Huckabee, when he closed his thoughts on the subject, “Everything is on the table: nuclear, biofuels, ethanol, wind, solar — any and everything this country can produce.”

(Transcript of the debate available through the Wall Street Journal.)