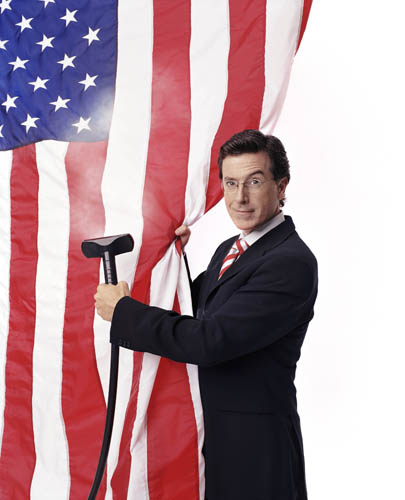 Good lord, this just may be the best thing that ever (maybe, sorta) happened to presidential politics. Last night Colbert announced he planned to run for president ( full details after the jump) and while nobody knows whether or not to take him seriously, he’s got both parties worried. Particularly in South Carolina, where he aims to get his name on the ballot for both the Democratic and Republican primaries (he explained the strategy by saying “I can’t lose twice”) as the state’s ‘favorite son.'”

And what do party elders have to say to that?

“If Stephen fulfills the requirements met in our delegates’ election plan and he actively campaigns in South Carolina, we welcome him to compete,” said Joe Werner, executive director of the South Carolina Democratic Party, in an interview with CNET News.com. Werner added that representatives from “The Colbert Report” had placed calls to the state party’s headquarters several weeks ago but that the party thought it was all a joke at the time.

Fulfilling the requirements, however, will be the tough part. Party regulations, Werner said, prevent Colbert from attempting to run on both the Democratic and Republican tickets. “It’s in our rules somewhere that you can’t be on two ballots,” he explained. “He’d have to pick one party.”

Representatives from the South Carolina Republican Party were not readily available for comment.

I don’t even know which alternative would be funnier. Is it possible? Ballot Access News reports that the “filing deadline for those primaries in November 1. He must pay $25,000 to run in the Republican primary, and $2,500 to run in the Democratic primary.” For the kind of publicity he’s getting (btw: he has a new book), that’s a pretty cheap date either way. Awesome. And If you think this doesn’t have potential, just remember Jesse Ventura…

From Editor and Publisher:

NEW YORK After nearly a solid week of dropping hints, Stephen Colbert threw his hat in the ring in the race for president tonight.

First, he made a surprise appearance at his old home, Comedy Central’s “The Daily Show,” Tuesday night to make an official announcement: He was officially considering a run for president and would announce his decision “some time soon.”

Soon arrived about 20 minutes later on his own show, The Colbert Report, when, with balloons falling, he said, ‘Yes, I’m doing it!” Then he welcomed CBS political analyst Jeff Greenfield to analyze his impact on the race “in the past three minutes.”

Greenfield said it was “astounding.”

Colbert took out one of the erstwhile “Colbert/Stewart 2008” bumper stickers that have circulated for awhile and cut out the Stewart part, saying that he might replace Jon Stewart as a possible vice president with someone named “Huckabee” or even “Putin.”

He said he would run as “favorite son” in his native South Carolina in both the Republican and Democratic primaries.

On “The Daily Show,” Colbert said it was all natural for him since he was born in the town of Could-be-President.

He was driven onto the “Daily Show” set by man in an Uncle Sam outfit and immediately set out a bale of hay and popped a brew to prove he was a man “of the people.”

Colbert said that he would at least make a big effort in South Carolina. The largest public TV network in that state had told E&P last week that it would be happy to allow him to launch his campaign at its studios.

Greenfield said that in the GOP primary he would have to stress his military background. Colbert seemed to say he served in the Marines but it turned out he meant “at a marina.”

To finance his campaign, he threatened to sell advertising patches on his suit, like a NASCAR driver.