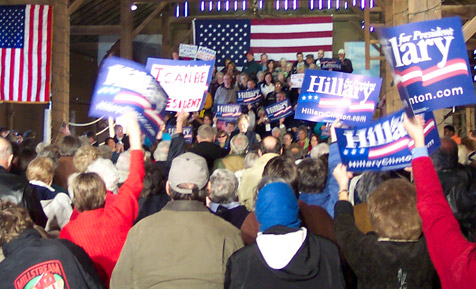 You see some weird things on the campaign trail. The other day, I was walking through a Holiday Inn when I stumbled upon Bill Richardson and John Edwards working out in the same exercise room, no more than ten feet apart, staring straight ahead and not speaking. Talk about a “Welcome to Iowa” moment.

Another thing I’ve seen, and this is probably unique to Iowa, not campaign trails everywhere, is roadkill. I don’t mean that in any figurative sense. I don’t mean the best intentions of the Founding Fathers have been turned into roadkill by the vulgarity and corruption of modern American politics. I mean dead animals with their carcasses on the shoulder and their blood splattered all over the highway. Never have I seen so many dead animals, nor dead animals so large, nor so much blood on the road. It’s like someone is playing a game of Grand Theft Auto on Iowa’s highway system.

How’s that for insightful political commentary?

But today at a Hillary Clinton campaign stop (I’ve got an article on my experiences with the Clinton campaign coming out tomorrow), I saw something that might take the cake. The Clinton campaign has pre-made signs that have the words “I Can Be President” written on them in a sloppy, childlike script. The signs are all written with red and blue paint, and all of them appear to be painted in the same hand. At today’s event in a weird fake barn, I saw a staffer holding one, a woman in the audience holding one, and two more sitting along the wall.

My suspicion is that the signs are made by the campaign staff and are intended to be handed out to adorable five-year-old girls who then sit in the crowd or behind the senator during events, to make sure the networks get a camerafull of the hope Clinton’s campaign inspires in young girls across America. The signs may be made to look childlike so it appears supporters brought the signs from home. Except when no young girls show up to your event (as none did today), you’re stuck with pre-made signs sitting along the wall.

Political reporters are so ho-hum about the artifice of campaigns that not one seemed to care or even notice.

The one sign that made it’s way into the hands of an audience member is visible in the photo above. The senator’s head is the white dot in the middle of the shot.