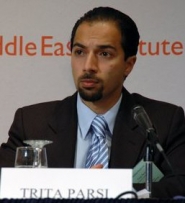 Here’s how high Trita Parsi thinks the stakes are getting on the Iran question: “In the next couple of months, we may end up in a military conflict between these countries,” the Iranian-American scholar said in San Francisco last week, referring to the United States, Israel, and Iran. Parsi, who supports diplomacy and thinks it has a fair shot, believes this type of conflict “would be an absolute shame,” not to mention what a war between these nations would actually mean. For any attack to effectively reverse Iran’s nuclear capability, Parsi said, “you would have to kill 6,000 Iranian nuclear scientists.”

Speaking to a full house at the World Affairs Council just up Sutter Street from Mother Jones‘ headquarters, Parsi unpacked the thesis of his new book, Treacherous Alliance: The Secret Dealings of Israel, Iran, and the United States, which came out in August. The book provides reason for hope that we aren’t—or at least don’t need to be—bound for World War III. His thesis is that rhetoric and ideology, while important, have been overemphasized in most analyses of Iranian-American-Israeli relations. The key to understanding both the present and history of the trilateral relationship, instead, is good old-fashioned geopolitics. Iran is not Nazi Germany reincarnate, Parsi argues; it is not hell-bent on destroying America. Why, he offers as one example, did the Iranians assist the U.S. “tremendously” in Afghanistan after 9/11? Well, Iran had been supporting the Northern Alliance for over a decade. And it was in their strategic interest to get rid of the Taliban. That “showed that when neither the United States or Iran are trying to exclude the other from the process, they could actually work well together,” Parsi said. He lays out some important points in a recent Nation article. And before you pigeonhole Parsi as a man of the left, read his essay on Mideast power politics in the American Conservative.

Parsi has lately been filling a gaping void in the commentariat for a sensible Iran expert who understands that it’s 2007, not 1938. In just the past few weeks he’s been quoted in the New York Times and the Los Angles Times, been interviewed on Diane Rehm and Morning Edition, and garnered links online. Parsi has sterling establishment credentials as well. (Interestingly, his doctoral thesis adviser at John Hopkins was ex-neocon Francis Fukuyama.) But more importantly, Parsi is articulate and TV-ready. And, as a charismatic young Iranian-American, he is a visible reminder that Bush & Co.’s tough talk is aimed at a real country populated by real people. Here’s to hoping we start seeing Parsi’s friendly face much more often.