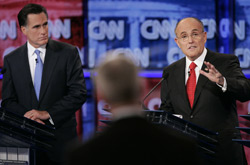 Ernie Nardi from Dyker Heights, Brooklyn, did us all a service. The question on sanctuary cities that Nardi asked at last night’s Republican YouTube debate—the first question of the night—set the stage for an epic confrontation between the candidates that included some of the sharpest attacks of the campaign season. The fight over immigration, quickly becoming the most contentious issue of the race, lasted for almost twenty minutes, long enough that each candidate got to say his piece. That meant something insightful could be learned about the entire field.

Giuliani began by insisting that “New York City was not a sanctuary city.” Giuliani then went on to detail and defend three ways in which New York City was in fact a sanctuary city: the Big Apple opened education and health services up to illegal immigrants, and allowed them to report crimes without fear of deportation. Giuliani stuck up for these three policy moves, while repeatedly insisting that they didn’t make New York a sanctuary city (a term, by the way, that is largely meaningless). He didn’t help his case by saying “we reported thousands and thousands and thousands of names of illegal immigrants who committed crimes to the immigration service.”

Mitt Romney fired right back, saying, “How about the fact that the people who are here
illegally have violated the law?” He went on to say that as Mayor, Giuliani welcomed and protected illegal immigrants.

Throughout the night, host Anderson Cooper gave anyone who was attacked 30 additional seconds to respond. This meant that anyone who got into a tit-for-tat got the lion’s share of the airtime. And it meant that fights got extended, as this one did.

Giuliani shot back at Romney, saying, “Mitt generally criticizes people in a situation in which he’s had the worst record.” Giuliani claimed that there were multiple sanctuary cities in Massachusetts when Romney was Governor. Then it got personal. “There was even a sanctuary mansion,” Giuliani said. “At his own home, illegal immigrants were being employed.”

Romney, drawing himself up to full height, said, “Mayor, you know better than that… I think it is really kind of offensive actually to suggest, to say look, you know what, if you are a homeowner and you hire a company to come provide a service at your home—paint the home, put on the roof—if you hear someone… with a funny accent, you, as a homeowner, are supposed to go out there and say, “I want to see your papers.””

Romney’s position is a reasonable one, though he was lying when he claimed illegal immigrants did not work on the Governor’s mansion. They did. Illegal Guatemalans tended the lawn there.

The fight between Romney and Giuliani went on. At some point one of the other candidates, off camera, said “Let us jump in here.” Romney accused Giuliani of “pursuing a sanctuary nation,” which is clearly false in light of Giuliani’s newly invigorated hatred of illegal immigration. Giuliani tried to defend himself but the spat had gone on too long. The crowd began to boo.

John McCain followed Thompson, looking disgusted with his rivals. “You know, this whole debate saddens me a little bit,” he said. McCain doesn’t do well in the debate format—he acts frequently as though the sniping and the soundbite messaging is below him. His frustration shows in his body language. It did here. But perhaps that was only because immigration is an issue on which McCain has taken a beating recently. He looked chastened for his previous support of bipartisan immigration reform bill and acknowledged at the debate that you’ve got to “secure the borders first.”

But the side of McCain that urged him to take the lead in a compromise plan that offered a pathway to citizenship to illegal immigrants eventually came out. McCain closed his comments by saying, “We need to sit down as Americans and recognize these are God’s children as well. And they need some protection under the law. And they need some of our love and compassion.”

McCain was followed by Tom Tancredo, who is running a campaign almost exclusively on his hardline opposition to illegal immigration. Asked about Romney and Giuliani fighting over who has the stronger anti-illegal credentials, the Colorado congressman was gleeful. “All I’ve heard is people trying to out-Tancredo Tancredo,” he said. “It is great.”

Asked a question about small businesses who want the sort of low-wage immigrant workers that would be available as guest workers under the McCain Senate bill, Tancredo was dismissive, saying, “I’m not going to aid any more immigration into this country.”

Duncan Hunter, a congressman from the San Diego area, spoke next. As someone who has taken the lead on Congress’ efforts to stop illegal immigration, Hunter could speak on substance. The double border fence he built south of his district “reduced the smuggling of people and drugs by more than 90 percent and the crime rate in the city of San Diego went down by 53 percent,” he said. Rudy Giuliani’s empty attacks on “sanctuary mansions” weren’t necessary.

The newly ascendant Mike Huckabee spoke last. He repeatedly defended his decision as governor of Arkansas to give college scholarship opportunities to the children of illegal immigrants. He took a compassionate tack. “We’re not going to punish a child because the parent committed a crime. That’s not what we typically do in this country.” Later he said, “We’re a better country than that.”

When Romney oversimplified Huckabee’s scholarship program—which demands that a student meet certain academic standards, be drug free, stay out of trouble, and be applying for citizenship—Huckabee said, “I know how hard it was to get that degree. I am standing here tonight on this stage because I got an education. If I hadn’t had the education, I wouldn’t be standing on this stage. I might be picking lettuce.”

As a Governor, Huckabee didn’t need to take a position on the now-defeated comprehensive immigration reform bill pushed by McCain, Ted Kennedy, and George W. Bush. Aside from the scholarships and a couple of occasions in which Huckabee was literally nice to immigrants, little is known of his position on the issue. But one line from the debate might offer a clue. His scholarship plan “accomplished two things that we knew we wanted to do,” Huckabee said. The first: “Bring people from illegal status to legal status.”

Update: Romney and Giuliani have a history of fighting over this stuff.