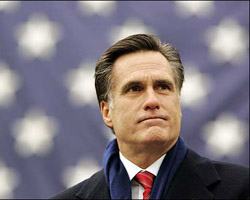 Evansdale, IA — At a campaign event on Friday in Carroll, Iowa, Mitt Romney tried to identify the lowest point of his presidential campaign for a crowd of about 90 gathered at a local country club.

Earlier this year, Romney said, his wife and he ascended a two-part stage at an event in Dubuque. The part of the stage that his wife, Ann Romney, stood on wasn’t built properly, and it collapsed under her weight, sending Ann tumbling to the ground. “I fell on da butt in Dubuque,” she said.

Romney’s attempt at humor notwithstanding, the real low point in his campaign might well have been this week. Multiple polls have showed former Arkansas Governor Mike Huckabee leading Romney by double digits in Iowa, a state that Romney has devoted inordinate amounts of money and time to and has owned, poll-wise, for months. Polls also show that Huckabee has opened up a sizable lead over Romney in South Carolina and is gaining ground in Nevada, another early state. As Romney fixed himself onstage at the Carroll venue, Journey’s “Don’t Stop Believing” blared ominously over the speakers. Empty seats littered the back of the room, only filled by stragglers well after the event’s official start time.

After speaking for only over fifteen minutes, during which he garnered infrequent and tepid bursts of applause, Romney received three questions before the crowd fell still and he had to prompt further discussion with the line, “Well, this is quiet here.” Later, Romney spoke to a capacity crowd in a small venue in Early, Iowa (crossroads of the nation, apparently), and finished the day at an event at Buena Vista University, where he was again unable to fill the house.

Romney has bled supporters to Huckabee as the dynamics of the race have shifted. Almost completely absent from Romney’s crowds Friday were the values voters who earlier flocked to his events in admiration of his strongly conservative positions on marriage (not for gays!), family (not for single parents!), and abortion (not for anybody!). The people who remain are occasionally disdainful of those religiously oriented voters and are impressed primarily by two things: Romney’s long history of success in the private sector and his tougher-than-thou stance on illegal immigration.

Erma Wilson, an elderly woman who deals antiques in Jefferson, Iowa, cited Romney’s record at Bain Capital and his stewardship of the Salt Lake City Olympics as the reason she was supporting him. “Anyone who’s accomplished everything he’s accomplished should be president of the United States,” she said.

A man who declined to give his name said that he was moving from Giuliani to Romney. Romney is “realistic,” he said. “He’s not going to solve the energy crisis in five years, like a lot of these guys promise. And he’s got a business background. He’s not a hack politician.”

I asked the man why he thought Huckabee had taken a lead in Iowa. “These folks,” he said, searching for the right word. “These fundamentalists, the religious groups. What are they?”

“Evangelicals! They’ve got off on the edge. They’re clamoring on Huckabee, and I think Huckabee personally is a shallow guy. He doesn’t have the background or the experience.”

A woman named Virginia standing nearby cited Romney’s “business background” to explain why she favored him. “The Christian Right” is propelling Huckabee in Iowa, she said with a grimace. But, she added, Huckabee would fare poorly in those parts of the country without a large section of fundamentalists.

A married couple at the Crossroads Restaurant in Early noted that they had chosen Romney recently because, “He’s a businessman. He knows how to get things done.” I asked whom else they had considered. “Not Giuliani, he’s just too liberal,” said the wife, Marilyn Winkel. “Huckabee is okay, we like his values. But Romney has the background to get things done.” This was a theme echoed by others in Early: “Values” were a must, and both Romney and Huckabee had them. But Romney’s private sector experience distinguished him from the former Baptist pastor.

At Buena Vista University, a woman named Janice from Cherokee, Iowa, was seeing Romney for the fourth time. “He’s tough, he’s been in the business world. He’s not a dreamer,” she said. “The thing I like most about [Romney] is his stance on this illegal immigration. Our country has been asleep as the wheel and we have got to get rid of these people. He’s having this Mike Huckabee problem here in Iowa, but Mike Huckabee is a minister. People have to realize ministers are not tough.”

I asked her about Huckabee’s support in Iowa. “The Evangelical people are Bible-toting people and they like him because he is a minister. But you can’t run your country on the Bible,” she said, sounding exasperated.

“Do you mean in a practical sense?” I asked. “Or because it violates the Constitution?”

“No,” she said. “Most people who are Bible-toting people want to be everything to everybody. You’re supposed to give to the poor, and you’re supposed to do this and that. And that’s fine. But when it comes to running a country, you can’t be that way.”

“They’re just too nice?” I clarified.

Romney, for his part, was confident that the Bible-toters mobilizing for Huckabee wouldn’t derail his chances in the caucus. Speaking at a press conference after the Storm Lake event, Romney stood in front of cameras, wearing a Mr. Rogers sweater over a semi-casual button-down shirt, with pleated khakis and brown loafers. He emphasized that his “grassroots team” and precinct-by-precinct ground game was going to carry him to victory. “I think we have the best [organization] in the state,” he said.

That may be. But with three weeks to go, Romney appears to be drawing his support mainly from Iowan Republicans looking for a CEO to run the country. Unfortunately for Romney, more GOPers in the Hawkeye State are looking for a pastor, and a nice one at that.