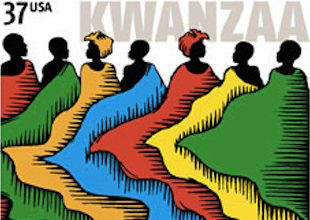 A few years back, I wrote an op-ed about my feelings about Kwanzaa. Every year since, I politely decline offers to ‘dog’ Kwanzaa again and every year the ‘afro-sphere’ digs it out and dogs me for being a tool of The Man who “hates every drop of black blood in her veins”. Yeah, the deep thinkers out there actually write things like that, let alone think them. That little nugget, by the way, came from a Ph D teaching at a leading black university and who heads an organization dedicated to racial progress. Makes home schooling seem reasonable.

That piece has zinged around so much in the last week, I gave up ignoring it. Here it is. Have fun.

I rarely read my work once it’s published. It’s so difficult to figure out what I mean that by the time I do (which is the only reason I write. I can’t think otherwise) I can’t bear to think about it anymore. Been there, done that. Wanna think about something else now. Well, it’s been nearly five years since I ‘dogged’ Kwanzaa so I bit the bullet and reread the piece, just to see if the responses had grown any more intelligent and less kneejerk. (Sadly, no.) I was also curious to see if I had any regrets, given how often it’s cited to prove I’m a Tom. Well, to my surprise, I was surprised; I’m shocked by how even handed, even generous, I was. I’d be tougher now (perhaps because of how much I hate every drop of black blood in my veins. Back then, I spozed I had hopes of reasonable debate.)

Here’s the nutshell: I think Kwanzaa is, at best, unnecessary, and, at worst, a sad attempt to stick it to the white man. I smell rejection, not embrace. But, hey, knock yourselves out.

Our ancestors weren’t trying to get back to Africa or become African again. They fought and died and, most of all, lived, so they could be Americans. (By the way, for a people dragged from West Africa, what exactly is the utility of an ‘African’ celebration rooted in Swahili, an Eastern African language? I smell a minstrel show.). My detractors claim that I think slavery is all that blacks are about. That’s so ignorant. I think that the battle to claim our American birthright is all that we’re about. And, if we’re going to go look for what’s left of Africa in us, we should focus on what’s real and not what’s fabricated. What’s real is how we melded our animist beliefs with Christianity, what’s real is how we melded our cooking with their cooking and made it America’s cooking, it’s our often out-sized demeanor, dress and comportment, it’s our speech patterns, our love of poetic oratory and the hair we work so hard to camouflage. It aint Swahili. That’s someone else’s Africa.

I’ll take my detractors embrace of their “African” identity seriously when they start giving a damn about what happens in Africa (let alone what happens in the Caribbean), instead of just making it’s kente cloth into briefcases and boxer shorts.

I’m not saying that American blacks shouldn’t think of themselves as ‘African’ (although I defy the Kwanzaa-ites to define that silly term). I’m saying that we don’t. And that’s ok. For me, Kwanzaa just doth protest a little too much. How do we really help, or hurt, by pretending not to be from here?