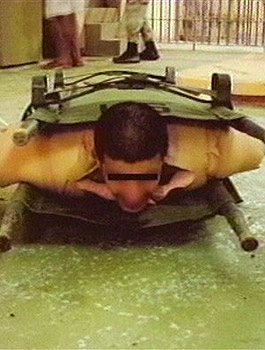 After news broke earlier this month that the CIA had destroyed videotapes showing agency operatives using harsh techniques to interrogate two terrorism suspects (among them Abu Zubaida), John Kiriakou decided it was time to step out from the shadows. Speaking to ABC News, among other news outlets, the 14-year veteran of the CIA, who retired in 2004, said he had been part of the team that interrogated Zubaida after his March 2002 capture in Pakistan. According to Kiriakou’s account, Zubaida broke after being waterboarded for 35 seconds, providing information that “probably saved lives.”

Though he did not personally use the controversial interrogation technique on the detainee, Kiriakou said he believed at the time that it had been effective in getting the Al Qaeda suspect to talk. He since has come to have his doubts about the use of waterboarding. “Like a lot of Americans, I’m involved in this internal, intellectual battle with myself weighing the idea that waterboarding may be torture versus the quality of information that we often get after using the waterboarding technique,” he told ABC News. “And I struggle with it.”

After Kiriakou became one of the first CIA officials to publicly discuss details of the agency’s rough treatment of Zubaida, the Department of Justice, according to McClatchy’s Jonathan Landay, this week opened a criminal investigation into whether Kiriakou had disclosed classified information. (The case was referred to the department by the CIA.) It could be that the feds are attempting to stifle further disclosures by Kiriakou, who has retained prominent whistleblower attorney Mark Zaid. While Zaid plays down the investigation, calling it “perfectly expected and routine,” it’s quite likely that Kiriakou would have had more to say, in part as a result of where he served in the agency. Not only in Pakistan, but back at Langley, Kiriakou was in a position to know about important debates inside the CIA, regarding interrogation techniques and other high-level matters.

In the summer of 2002, after returning from a posting as the Counterterrorism Center chief in Pakistan, where he was involved in the questioning of Zubaida, Kiriakou served as the executive assistant to Robert Grenier, then the CIA’s Iraq mission manager. Grenier, a former station chief in Pakistan and director of the CIA’s counterterrorism center, later was called as a witness at the trial of the vice president’s former chief of staff, I. Lewis “Scooter” Libby—and his testimony proved damaging to Libby’s defense.

According to a declassified document filed with the court after the Libby trial and obtained by Mother Jones, Kiriakou authored a June 10, 2003, email sent to several CIA officials. The message apparently was written in response to intense efforts at that time by the vice president’s office to learn how Plame’s husband, Ambassador Joseph Wilson, had been selected to go on a CIA-sponsored fact-finding mission to Niger. The email makes clear that senior CIA officials, including Kiriakou’s boss and the Deputy Director of Central Intelligence, did not know who Valerie Wilson was at the time. Prodded by Cheney’s office, they were seeking information on her role at the agency prior to a scheduled conversation with Libby the next day.

Libby later would claim that he did not learn who Plame was until two days later, from the vice president (and that he then forgot about her CIA connection until he was reminded a month later by journalists).

It’s unclear whether Kiriakou will illuminate his role in the Plame saga or say more about the interrogation techniques employed by the CIA. (In a brief interview, Grenier, now retired, said that it was his understanding that his former assistant may be writing a book.) For now, Kiriakou is referring all calls to his lawyer, Zaid, who explained in an email his client’s decision to go public. “John was completely uncomfortable with the accusations that the CIA has ‘torturers’. Here it was that the Bush administration ordered and approved the techniques but yet it would not come to the public defense of the Agency, not even to Members of Congress, several of whom obviously had been ‘read into’ details of the CIA’s interrogation program.”

“The hypocrisy is breathtaking,” Zaid added, “and John felt it necessary, appropriate, and lawful to say something.”

While Kiriakou felt compelled to offer a defense—albeit a nuanced one—of the CIA’s use of waterboarding, FBI accounts of Zubaida’s interrogation, as reported by the Washington Post and by journalist Ron Suskind, cast doubt on whether the harsh interrogation produced any valuable information. “FBI officials, including agents who questioned [Zubaida] after his capture or reviewed documents seized from his home, have concluded that even though he knew some al-Qaeda players, he provided interrogators with increasingly dubious information as the CIA’s harsh treatment intensified in late 2002,” the Post reported this week. “In legal papers prepared for a military hearing, Abu Zubaida himself has asserted that he told his interrogators whatever they wanted to hear to make the treatment stop.”

Meanwhile, sources say that many CIA officials view Kiriakou’s efforts to explain the rationale behind the CIA’s interrogation techniques to the public as hopeless, if well intentioned. Says his former boss, Grenier, “I think it was extremely ill advised.”