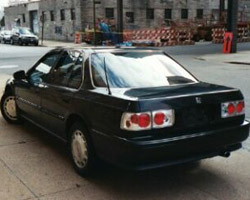 So, my family’s car-buying saga continues. Last we left off, my husband and I had walked away from purchasing a used Volkswagen Passat station wagon to replace our 15-year-old Honda Accord, rather than sign a contract waiving our right to sue the car dealer and finance company in court if they ripped us off. The car salesman warned us that we wouldn’t be able to buy a car anywhere without signing a contract containing this arbitration clause, as it’s known. Even so, we were indignant and vowed to shop on Craigslist.

As it turns out, the salesman knew what he was talking about. Craiglist is great so long as you’re looking for a car as old as the one we’re trying to get rid of. But the car we wanted, a Toyota Highlander Hybrid, can scarcely be found used. (We dropped our search for a Passat after Consumer Reports downgraded it for reliability reasons.) So we returned to the car dealer world, vowing not to set foot into any dealership that used an arbitration clause in its sales documents. I contacted a half-dozen car dealerships in the Washington, D.C. area and asked them in advance if their contracts included an arbitration clause, and if so, if they’d take it out. All the dealers used the clause, and none would remove it. In response to my queries, I received emails like this one:

“I am sure you already know that we cannot take the arbitration clause out….sorry….but one thing I can tell you…Koons has been in the ‘car business’ for many many years…we want to be professional and fair…and we do not have very many instances where arbitration has been exercised. We want HAPPY and LOYAL customers….and you have to take care of people THE RIGHT WAY to have happy and loyal customers! I have been here nearly seven years now…and I have MANY repeat customers……people who want a Toyota….and do not shop ANYWHERE ELSE!!”

“I honestly don’t think your going to find a dealership that will eliminate the arbitration clause.”

After another month of searching for our car, we were less indignant and more despondent. Finally, during my daily check of cars.com, I came across a regular guy who was selling the car we wanted. The only catch was that he lived in West Virginia, more than 100 miles away. But we figured it was worth it. My husband drove out to see the car on a Sunday morning. It seemed fine, the price was right, and the seller seemed far more honest than any of the dealers we’d talked with.

So we arranged for a loan through our bank, shopped around for new insurance—which I learned is also a racket—and were ready to purchase our new wheels. Or so we thought. Later that week, the seller drove the car into D.C. and met my husband at our bank. Not long afterwards, I got a call from my husband. “There’s an arbitration clause in the loan documents,” he said. “What should I do?”

I half-joked that he should tell the bank he was in the National Guard. Congress passed legislation limiting such clauses in lending contracts with military members, but it only applies to loans with interest rates above 36 percent, which this definitely wasn’t. A lawyer had once told me you could get around an arbitration clause by scribbling it out, initialing it, and hoping the bank didn’t notice. But the vast majority of the loan document was the arbitration clause, making such a stealth move virtually impossible. Arguing with the bank officer was equally useless. She had no power to even get the paperwork out of Atlanta, or Charleston or wherever it was coming from, much less negotiate new terms.

The bank agreement was worse than the sales contract we’d walked away from a month earlier at the dealership. You can read the whole thing here (PDF). Essentially, if we signed it, we would be forced to submit to mandatory binding arbitration through a private firm hired by the bank, should a dispute arise. We wouldn’t be able to sue SunTrust if the bank defrauded us or illegally repossessed our car. We’d have to give up our right to be part of a class action against the bank over any future rip-offs, and we wouldn’t have any of the usual rights to discovery and appeal. Most importantly, we’d never get to have a jury hear our case.

As former Georgia Governor Roy Barnes testified before Congress in October, a mandatory arbitration clause is “a contract for a crime.” It’s a sign that the bank knows it’s going to rip us off in some fashion, or if not us specifically, people like us, and it doesn’t want to pay if it gets caught.

Talking to my husband on the phone, I pictured the guy from West Virginia sitting there, thinking we were nuts for making a big deal out of this. He had a divorce to finalize and just wanted to sell his car. I started to rationalize. The bank, SunTrust, is not likely to be as scummy as the car dealerships, right? They weren’t going to be messing with the odometer. But they could mess with our credit, nickel and dime us on hidden and potentially illegal fees, or illegally repo our car. In the end, though, it didn’t matter what I thought, because we didn’t have a choice.

Aside from a few small credit unions, of which we are not members, there are no banks left that will loan money without requiring borrowers to sign an arbitration clause. And, competition in banking really doesn’t exist. In D.C., a mere three banks, including SunTrust, dominate more than 60 percent of the market, according to the Federal Deposit Insurance Corporation. When I had inquired about a car loan from another bank, PNC, they tried to talk me into taking out a home equity loan to pay for the car, so they could take my house if I missed a few car-payments, hardly an appealing alternative.

In legal terms, we were discovering that there is no meaningful choice in the marketplace. There was nowhere else for us to go. It is practically impossible to buy a car or borrow money without signing away your right to have a dispute heard by a jury, a right so fundamental to American democracy that it’s in the 7th Amendment. The Founding Fathers almost didn’t ratify the Constitution because the original version did not include the right to a civil jury trial. But large corporations have all but wiped out the 7th amendment through contract language that never was put to a legislative body for vote. We the people did not ask for this.

Market purists argue that consumers like arbitration clauses because they make goods and services cheaper by reducing the cost of litigation to the company. While I don’t have any data, my gut tells me that the arbitration clause did not reduce the cost of my car loan, which at 8.99 percent was no bargain. Free market legal scholars like Ted Frank of the American Enterprise Institute also defend arbitration clauses by saying that this is a free country, an enormous economy. There are choices. After all, we could buy an old, cheaper car from an individual seller, for cash, if we looked hard enough. But is that really a choice?

The only reason we were buying a new (used) car is because the old one is simply not safe enough. It runs just fine, gets decent mileage, and has an enormous trunk that comfortably holds all our stuff. But it doesn’t even have a passenger-side airbag. The driver death rate for a 1993 Honda Accord is 60 per million registered cars, according to the Insurance Institute for Highway Safety (PDF). The fatality rate for the car we were about to buy is only 14. This purchase for us was, literally, a matter of life and death.

If someone in my family were to get seriously injured or killed in a car accident that could have been avoided had we signed an arbitration clause, I would never forgive myself. So we signed. We traded a constitutional right we hope we’ll never need for multiple air bags we also hope to never need. Soon you’ll be able to find our old car on Craigslist ($2500 as is). But I promise: If you buy it, we won’t make you sign an arbitration clause.