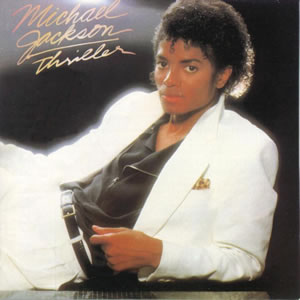 I had just turned 12 years old when Thriller came out, and while my musical taste was already showing signs of techno snobbery (boy, did I love that Human League album) I was just as caught up in Michael Jackson mania as everyone else. Released on December 1st, 1982, Thriller suddenly seemed to be everyone all at once, and even at the time, the album felt like an Event, with an almost electric feeling in the air when we’d put on “Beat It.” Of course, an album that’s sold 104 million copies can never be said to really have “gone away,” but its thin, oddly minimalist sound couldn’t have been less in fashion in the 90s. Listen to “Billie Jean’s” legendary bassline: when it steps up a fourth on “who will dance/on the floor/in the round,” it’s almost comically high, barely a bass at all. But clearly “Billie Jean,” which along with “Beat It” is the album’s creative and popular peak, has remained a dance floor staple, achieving an iconic status that inoculated it against divergent trends. It’s only this year, however, that some of the album’s “lesser” tracks seem to have found new life in high-profile samples and remixes.

Earlier this year, Barbadian singer Rihanna followed up “Umbrella” with “Don’t Stop the Music,” a club-oriented track that relies heavily on “Wanna Be Startin’ Somethin’,” a track whose Manu Dibango-referencing chant and twisted lyrics seem just as inscrutable to me today as they did to my 12-year-old mind. “You’re a buffet/they eat off of you”?! Yet the insistent, funky bass riff is irresistible, and it fits right in with today’s driving club rhythms.

Kanye West’s sampling of “P.Y.T.” is, naturally, more radical and surprising. The track was always a C- or D- level song on Thriller, ranking ahead of only “The Lady in My Life” in terms of popular appeal, and the lyrics retain a certain creep factor today in light of Mr. Jackson’s alleged youthful tastes. The moment towards the end of the song when a voice sped up to chipmunk-style speeds sings a bit of backup vocals has always baffled me, but for “Good Life” Kanye grabs this section and stretches it out, allowing the rising chords space to show their full force, and the speedy vocal only adds to the song’s sense of joy and fun.

More than anything, though, this year I’ve noticed a resurgence in the use of one song, a track I’ve heard on dance floors around the world: “Thriller.” Hampered by length and its novelty subject matter, and seemingly made just for its overindulgent video, it’s been hard to appreciate “Thriller” just as a song, but these days, everywhere I go, DJs are dropping the track into their sets, and the huge intro chords inevitably cause paroxysms of glee amongst the crowds. A highlight of the Halloween-themed mashup album Mashing Pumpkins was Pimp Daddy Supreme’s “Thriller Shake,” pairing an aggressive rap vocal with the track, and “Thriller” holds up just fine. Electro remixes abound as well this year, with the best (and most often heard) coming from Engish DJ Hervé. He calls it “Cheap Thrills,” and while it definitely goes right for the jugular with its repetition of those big intro chords, its glitchy cut-ups and careening bassline takes the track to a deeper level.

What gives? One could spin wildly speculative theories about how the song speaks to our fearful times, where unknowable villains and monsters may lurk around every corner: your pop star boyfriend might even be one himself. The song’s hyper, blasting intensity cuts through background noise like an alarm, and it’s both a reminder of simpler times and an acknowledgement of the terror that surrounds us, giving us permission to dance through the fear. “No one’s gonna save you from the beast about to strike,” that’s for damn sure, but remember, tonight is thriller night, and when those chords hit you, you can’t help but be thrilled.