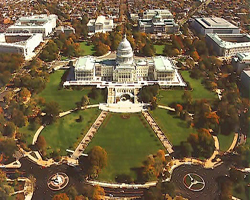 As the year draws to a close, it will be tempting for pundits—liberal and otherwise—to despair at the Democrats’ inability to wield their new congressional leadership to affect real and swift change in the country. After all, the war in Iraq not only continues, but 2007 was its deadliest year. FISA presents a greater danger to American civil liberties today than it did when the Democrats took their gavels in January. And the radiant vision of Karl Rove being escorted down Pennsylvania Avenue to jail never came to pass.

But there have been successes, too. Many have emerged as part of an aggressive oversight effort, which has dragged a number of scandals out of the shadows and into the cleansing daylight. Democrats in both the House and Senate have led the way in exposing corrupt leadership at the Department of Justice, in revealing just how shadowy the president’s domestic spying program is (and how unpopular it is among members of the federal law enforcement community), and in alerting the country to the damaging and deadly role private military contractors play in war zones.

So as we all take the measure of 2007, here’s the good, the bad, and the ugly in a year’s worth of congressional oversight.

Quiet as a mouse. There certainly have been gaffes, softballs, and missed opportunities. And the most obvious are found in the Senate Committee on Homeland Security—the Senate’s version of Rep. Henry Waxman’s Oversight Committee in the House. Unlike Waxman’s enthusiastic probing, the Senate chair conducted zero proactive investigations into Bush administration malfeasance. It’s chairman? Connecticut’s Joseph Lieberman.

Fit for a Prince. Likewise, when Erik Prince, the now-infamous CEO of private military contractor Blackwater, was called to testify before Waxman’s committee on October 2, many assumed he’d be slaughtered. Blackwater contractors had recently massacred more than a dozen Iraqis and had been implicated in a host of other atrocities. Waxman even came armed with a long and damning report about the company’s misdeeds. But by the end of the hearing, Prince had found his stride. He shifted the focus from Blackwater to structural problems with the war effort in Iraq and refused to disclose how much of his company’s billion dollars in federal contracts constituted profit. He closed by graciously thanking the committee for its hospitality. “Glad I could come here and correct some facts,” Prince said.

Naming names—of sources. Over the summer, the House Judiciary Committee created an electronic tip line for whistleblowers in the Justice Department. Do-gooders provided enough personal information to allow the committee to investigate, but were assured the information would be kept in confidence. And it was—until the committee accidentally sent a list of the whistleblowers’ email addresses to every address that had been entered at the site, including Vice President Dick Cheney’s public email: vice_president@whitehouse.gov.

Foresight is 20/20. Blunders weren’t confined to investigations. Democrats Dianne Feinstein and Charles Schumer helped Republican Judiciary Committee members endorse the nomination of then-designate Attorney General Michael Mukasey, despite his equivocal answers to questions about torture. The full Senate confirmed him by a vote of 53-40 on November 8; just one month later, the Department of Justice revealed that CIA videotapes of two detainees being interrogated—and allegedly waterboarded—had been destroyed, despite widespread objections among members of the government in the know. Given Mukasey’s unwillingness to describe waterboarding as torture—and therefore a crime—some, including Senator Joe Biden, want an independent investigation of the matter.

The year started on a better foot for Democrats. Mukasey’s nomination was the result of months of congressional tenacity in uncovering the administration’s lies and distortions about its firing of U.S. attorneys and its warrantless wiretapping program. Throughout the spring and summer, the House and Senate Judiciary committees uncovered documents and held hearings that shook the Justice Department to its foundation.

Oops, did I say that? The U.S. attorneys scandal erupted almost immediately after the Democrats took over Congress, and, as such, became the focal point of their oversight. In their first weeks in power, Democrats interrogated Justice Department officials and obtained documents at odds with their testimonies. On May 23, under a grant of limited immunity, Justice’s former director of public affairs, Monica Goodling, told the House Judiciary Committee that her one-time colleague, then-Deputy Attorney General Paul McNulty, had misled the Congress about the extent of White House involvement in politically motivated firings of U.S. attorneys.

Poor bedside manner. Just days earlier, on May 15, former Deputy Attorney General James Comey detailed for the Senate Judiciary Committee a 2004 attempt by then-White House Counsel Alberto Gonzales to make then-Attorney General John Ashcroft sign off on the National Security Agency’s so-called Terrorist Surveillance Program. Delirious in his hospital bed, Ashcroft refused, referring Gonzales instead to Comey. Comey thought the warrantless domestic snooping illegal and did not approve it. When the White House attempted to go over his head, he and several senior Justice Department officials threatened to resign.

All in the family. Prince’s graceful exit from Waxman’s October hearing was not the end of the Blackwater saga. A big part of Blackwater’s job in Iraq is to protect State Department officers, but former Inspector General Howard “Cookie” Krongard had a peculiar allergy to watchdogging the relationship. On November 14, we learned why. Waxman’s committee asked Cookie some tough questions—among them, did he know that his brother, A.B. “Buzzy” Krongard, was a member of Blackwater’s advisory board? Cookie first insisted that his brother had told him otherwise in a conversation six weeks prior. During a break, he called his brother Buzzy and, he says, learned the hard truth, prompting him to vow before the committee to recuse himself from all Blackwater investigations going forward. The story didn’t end there. Later that same day, reporter Spencer Ackerman of TPM Media reached Buzzy by telephone and learned that Cookie, according to Buzzy, had known of his brother’s role at Blackwater for weeks. In the wake of this revelation, Cookie stepped down from his position altogether. Whether he’ll face a perjury inquiry remains to be seen.

The attorney general has no clothes. Perhaps the biggest oversight victory can be found in the dislodging of Gonzalez. On July 24, brewing Justice Department controversies came to a head when Gonzales appeared before the Senate Judiciary Committee and embarrassed himself badly on a number of fronts. In his testimony, Gonzales insisted, among other things, that the warrantless wiretapping program was a matter of little controversy within the Department of Justice—that all disagreements had involved another, unidentified intelligence operation. But two days later, on July 26, FBI director Robert Mueller, under questioning by the House Judiciary Committee’s Rep. Mel Watt, admitted to having “serious reservations about the warrantless wiretapping program.” The admission raised two possibilities: Either the wiretapping program had once been much more aggressive than we know, or Gonzales had directly perjured himself.

In September, following in the footsteps of a host of senior Justice officials, Gonzales tendered his resignation—a capstone of a series of investigations so aggressively obstructed that three current and former administration officials may well be held in contempt by one or both houses of Congress in 2008.