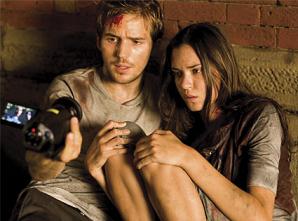 I saw Cloverfield (herein I shall refuse to type that ridiculous title and will refer to it as “Monsterfield” or “Cloverfrog”) at the press screening Tuesday night, and I suppose waiting three days to write about was probably a good idea. I’m a sucker for apocalypse (my cinematic motto is “The World Must Be Destroyed;” I dragged friends to “The Core” on opening night) plus I’m always intrigued by J.J. Abrams’ creepy mysteries, so I came in as giddy as a schoolgirl, ready to see some crap get smashed. And sure, it’s scary and there’s some good effects, but reading Manohla Dargis’ review in the Times just now made me laugh out loud. As you probably know, the film’s conceit is that it’s “found footage,” a videotape found in “the area formerly known as Central Park” after Monsterfrog comes to town. The tape starts out at a loft party for what’s basically the casts from every Real World minus the gays or blacks, and we follow a few of them on an insane mission to save a gal whose apartment (in one of the Trump Towers on Columbus Circle!!!) has gotten smooshed. A dude (or perhaps a “bro”) carries the camera around the whole time, taping even as friends are killed or they’re attacked by giant cricket crabs who need to implant their eggs in your brain. Is it a bitter commentary maybe, asks Dargis:

For a brief, hopeful moment, I thought the filmmakers might be making a point about how the contemporary compulsion to record the world has dulled us to actual lived experience, including the suffering of others — you know, something about the simulacrum syndrome in the post-Godzilla age at the intersection of the camera eye with the narcissistic “I.” Certainly this straw-grasping seemed the most charitable way to explain characters whose lack of personality (“This is crazy, dude!”) is matched only by their incomprehensible stupidity. Smart as Tater Tots and just as differentiated, Rob and his ragtag crew behave like people who have never watched a monster movie or the genre-savvy “Scream” flicks or even an episode of “Lost” (Hello, Mr. Abrams!), much less experienced the real horrors of Sept. 11.

First, I’m dying, that’s so hilarious, and second, thank you. If the filmmakers have gone to all the trouble of creating this whole found-footage meta-concept, and we’re supposed to believe this is “real” footage with “real” “people,” how come none of them seem to have any media, cultural or historical awareness, like even the most slack-jawed of current youths? Their party had Architecture of Helsinki on the stereo, and you’re telling me none of them think maybe a kooky adventure to rescue some rich girl who’s probably already dead while the city gets destroyed around them is maybe not such a good idea? Any point they’re trying to make about how disaster comes and we don’t know what it is at first, and the horror of possibly going to our graves without ever knowing what hit us, is lost in the complete vacuousness of the characters. In trying to make them “real” they flattened them to cardboard.

So, thumbs down, but I will go look up the Slusho website right now just to see, maybe there’s more clues that might make me enjoy it more in retrospect?