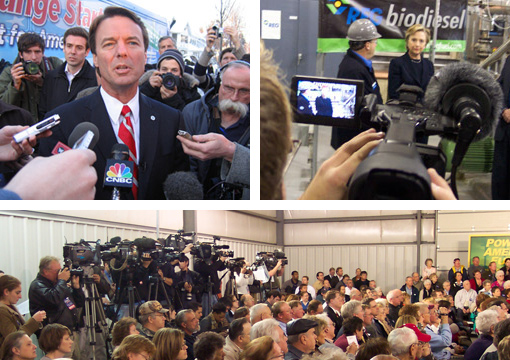 I’m going to try and do the unthinkable and defend the campaign press.

I’m spurred to this by Matt Taibbi’s latest in Rolling Stone, another one of his scorching indictments of the press corps. “We’re engaged in a catastrophic war in Iraq, facing a burgeoning nuclear crisis in Pakistan, dealing with all sorts of horrible stuff,” writes Taibbi, “[and] the media has done its best to turn a once-promising race into an idiotic exchange of Nerf-insults.”

But I think there are four reasons for this. Some of them are inevitable systemic problems that absolve the press corps of at least some of the blame. One, rhetorical differences point up philosophical differences. Clinton will “work for change”: That signals to voters that she’s a technocratic incrementalist. She knows the difficulties associated with every step in the lawmaking process. She knows how to work the levers of power in Washington to get past those difficulties, even if that means occasionally sleeping with the devil.

Edwards will “fight for change”: That means that he will be an ax-wielding crusader who won’t tolerate any incremental steps or negotiated settlements. He’s going to break down some doors and twist some arms on behalf of the middle class. Take your pick on which approach you prefer.

The second reason why minor rhetorical differences matter is because on policy, the Democrats are all pretty similar. They have roughly the same economic stimulus packages, roughly the same health care packages, roughly the same Iraq plans, etc. And besides, when any of these candidates assumes the White House, his or her priorities and plans have to shift to match political realities. There is a legitimate argument to be made that the philosophical approaches the candidates have to campaigning (and, indirectly, governing) matters as much as policy in these early stages.

Third, there’s the need for material. The press will write a story about Obama’s economic stimulus package the day after it comes out, and then it can’t write about it anymore. There’s nothing new to be said. And if you’re on the trail, the candidates say the same things over and over, so after you’ve written about the thoughts on education, immigration, Iraq, etc. that Obama is willing to reveal in his stump speech, you can’t write them any more. What’s left is writing about the subtle ways the campaigns change their rhetoric to respond to the day’s events or to the jabs of another campaign. And that, since it is the only thing that is different from the day before, becomes news.

Even when the press is covering the next Clinton campaign surrogate who has accidentally mentioned Barack Obama’s youthful drug use, it is illustrating for the public how the two campaigns do business. This shouldn’t be the whole story, but it is a worthwhile part.

And the fourth reason Taibbi identifies himself: “We rarely get to ask the candidates real questions, and even when we do, they almost never answer.”

So to some extent, the press is forced into the type of coverage it currently produces, and that isn’t a horrible thing.

But there are definitely problems. For example, writers and pundits who posit who they think won a debate because so and so “looked warm” or “appeared presidential” need to realize that they are just one person, and their perceptions are theirs alone. Other pundits (or their spouses, who watched the debate sitting right next to them) likely had different responses entirely. Their opinion is not worth hearing simply because they have a platform upon which to announce it. (This happens most frequently in TV media, which suffers from the fact that, in many cases, it has to fill 24 hours with news programming. TV media is almost impossible to defend.)

And Taibbi’s right when he says that sometimes, the press nudges the candidates into silly positions.

What the press wants out of Huckabee isn’t more detail about his economic ideas, but evidence that he is willing to “fight back” against Romney. “Can Mr. Nice Guy go on the offensive?” wondered Politico.com, a weirdly aggressive torch-waving newcomer to the media witch-hunt game. “That’s the question facing the surging Mike Huckabee. . . .”

That’s the question. . . . The passive structure of the Politico lede is the standard method that campaign trail journalists use when disguising value judgments as statements of fact. There’s no data backing up the notion that this really is the question facing Huckabee; the press is simply making sure Huckabee can be counted on to jump through any hoops they might decide to hold up for him, no matter how asinine these tests might be.

And jump he does. In Indianola, Huckabee not only mentions Romney by name, he unleashes a torrent of anti-Romney abuse…. The press reviews the next day are exultant. NICE-GUY HUCKABEE FIRES BACK IN IOWA shouts the Baltimore Sun. HUCKABEE DROPS ‘R-BOMBS’ IN IOWA seconds a satisfied Politico.

So there is room for improvement. There are plenty of problems that I don’t address here (Chris Hayes has some excellent points on the subject). But I would argue that the press isn’t actively undermining American democracy, the way Taibbi suggests. What would you like to see the news media report on? I’d be interested in your thoughts in the comments.

Update: I’ll add two things. One, the press needs to more fully embrace a fact checking role. This doesn’t mean having a “fact check” portion of your website, the way the Washington Post does. That’s a start, but every reporter ought to be willing and able to do enough research to call bullshit on a candidate in the body of his or her stories. If that means one particular story goes up half an hour late and a competing newspaper gets its story online first, so be it.

Two, the press needs to be careful about buying into its own echo chamber and getting carried away with itself. The Clinton campaign was coming off a bad loss in Iowa. Pundit after pundit doubted her chances of recovery; these pundits saw each other on TV, emailed each other, went out for drinks with one another, etc. Eventually all that punditry turned into a bury-Clinton meme with so much momentum that the whole media establishment went off the rails. A deep breath now and again would be helpful.