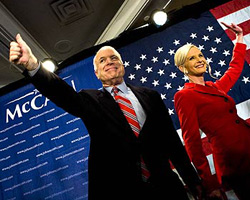 MANCHESTER, NH — Everyone knows independents love John McCain. It turns out, Republicans love him too.

McCain won amongst men and amongst women. He won amongst voters who value national security and those who prioritize the economy. He won handily amongst lower-income voters, and managed to tie the former corporate CEO Romney amongst high-income voters. It was a decisive victory for McCain.

And it was stunning one for multiple reasons. McCain’s campaign was pronounced all but dead due to lack of funds and staff upheavals last summer. Mitt Romney outspent McCain badly and hammered him with negative advertisements in this state. And no Massachusetts senator or governor has ever lost a primary in neighboring New Hampshire.

So New Hampshire’s love affair with John McCain continues. Chants of “Mac is back” resounded through the Nashua Crowne Plaza Hotel last night before McCain gave his victory speech. McCain emphasized his ties to New Hampshire’s voters, explaining that he tried to speak to them, listen to them, argue with them. He treated them with respect. “I didn’t try to spin you,” he said, emphasizing the fact that authenticity, one of his strengths, is perceived as one of Mitt Romney’s weaknesses. “Tomorrow,” he said, “we begin again.”

But where? The next Republican primary is Michigan (Jan. 15), where Romney was born and his father was governor. McCain is polling fourth there, and Mike Huckabee has the most momentum. The primaries after Michigan are South Carolina and Nevada (both Jan. 19). In South Carolina, a state with which McCain has a mixed history, he is stuck in a three-way tie for third place. Huckabee is considered the frontrunner there, due to his connection to the state’s many Christian conservatives. In Nevada, McCain polls fourth.

In the end, McCain’s win here may actually help Rudy Giuliani. The former New York Mayor’s plan to skip the early states on the Republican primary calendar looked foolish when he dropped off the media radar during the Iowa and New Hampshire circuses. But because neither Huckabee nor Romney can take momentum out of New Hampshire, it is very possible the Republican race will reach the Florida primary (Jan. 29) and Tsunami Tuesday (Feb. 5) without a clear frontrunner. Because Giuliani is polling exceptionally well in Florida, California, New York, and other large states due to vote then, he may just pull out a come-from-behind victory.

But then again, Giuliani did try to win in New Hampshire, no matter what his campaign claims, and took a tepid fourth. He beat Ron Paul by just a couple thousand votes. It is entirely possible that the only thing that really appeals to Republican voters this election season, with the exception of pockets of support here and there for assorted candidates, is the fabled none of the above.