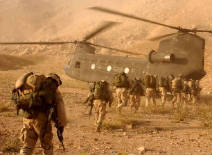 Afghanistan. In the 1980s, we sent in the CIA, gave weapons to the mujahideen, and defeated the Soviets. In the 1990s, we got out, allowed our erstwhile allies to kill each other, and sat by as the country was taken over by religious fanatics and terrorists. After 9/11, we realized our mistake, went back in, chased Al Qaeda and the Taliban out of their caves, and declared victory. Afterward, we invaded Iraq and once again forgot all about the place. But the pendulum still swings, and now, as before, our willful ignorance of that troubled country (if indeed it meets that definition) is coming back to bite us.

Or so conclude three separate reports released yesterday by the National Defense University, the Atlantic Council, and the Afghanistan Study Group (ASG). “Make no mistake,” says the Atlantic Council report, “NATO is not winning in Afghanistan… Urgent changes are required now to prevent Afghanistan from becoming a failing or failed state.” The problem (and don’t say you didn’t see this coming) is that the war in Iraq drained political will, money, and military resources away from Afghanistan, allowing it to drift back into the very same chaos that first attracted Bin Laden to the sanctuary of its caves. According to the ASG report:

Afghanistan stands today at a crossroads. The progress achieved after six years of international engagement is under serious threat from resurgent violence, weakening international resolve, mounting regional challenges and a growing lack of confidence on the part of the Afghan people about the future direction of their country. The United States and the international community have tried to win the struggle in Afghanistan with too few military forces and insufficient economic aid, and without a clear and consistent comprehensive strategy to fill the power vacuum outside Kabul and to counter the combined challenges of reconstituted Taliban and al-Qaeda forces in Afghanistan and Pakistan, a runaway opium economy, and the stark poverty faced by most Afghans.

Yesterday’s release of the ASG report (produced by the Center for the Study of the American Presidency, which also wrote the Iraq Study Group report) has temporarily revived Afghanistan in the eyes of the press, which in recent days has pumped out a series of “where are they now”-type reports about the country.

The occasion was also marked by a hearing of the Senate Foreign Relations Committee this morning, at which the report’s principal authors, Marine General James L. Jones and Ambassador Thomas R. Pickering, testified to their deepening concern about the prospects of Afghanistan spiraling out of control. The situation there is a “growing crisis,” said Pickering, who warned of “weakening resolve” among NATO partners amid escalating violence.

The Bush administration (which maintains a somewhat rosier view of things) was represented at the hearing by State Department officials Richard Boucher and David Johnson. Under questioning from Senator John Kerry, Boucher acknowledged that bombings have increased (77 suicide bombings in the last six months, versus just five in the preceding four years), but claimed that things are otherwise “improving.” Despite increased violence, he noted, the Taliban remain incapable of taking and holding territory. “They’ve failed,” he said.

It certainly doesn’t feel that way in the south of the country, where NATO allies are bickering over who should deploy combat forces to take on the resurgent Taliban. Violence in southern Helmand Province is up 60 percent on the year, on top of a nationwide uptick of 27 percent. Canadian Prime Minister Stephen Harper warned recently that unless NATO can deploy another 1,000 soldiers to Kandahar Province (Helmand’s neighbor to the east), he will withdraw Canada’s troops; his nation has been shouldering a large portion of the fighting in the region and has lost 78 soldiers and one diplomat since deploying in 2002. So far, no other NATO country seems willing to share the pain, although the Germans are debating increasing their troop presence in northern Afghanistan.

For it’s part, the U.S. military is planning to send in another 3,200 Marines in anticipation of a third-annual Taliban spring offensive.

It would appear we face yet another choice in the eternal question: should we care about Afghanistan? Given what happens when we ignore the place, the answer should be obvious. But Senator Richard Lugar knows that even obvious truths sometimes escape us. “At some point… our NATO allies, maybe even of the American people, our constituents, will say, ‘We’ve done enough. These folks are on their own.'”